A giant still roams the Earth 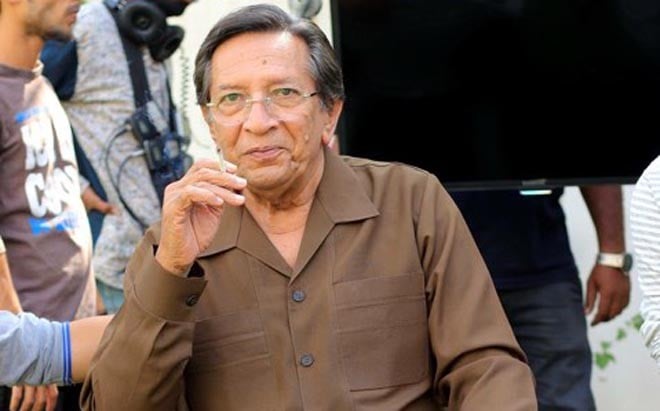 "Pakistan Zindabad!" roared a refugee migrating to Pakistan vehemently in the movie Jinnah (1998). The voice, the gravitas that Talat Hussain embodies in the film is true for him in real life as well. Despite having carved a niche for himself in European radio, television and cinema, the industry veteran returned to the arbitrary system of Pakistan in the 1970s after he and his wife moved to Britain where he joined the London Academy of Music & Dramatic Art.

His pneuma lives as he continues to blow life into lifeless words on paper, over five decades later, he’s on a set for a soap; happy to be directed by the youth.

There’s obvious intimidation within me when I catch up with Talat Sahab amidst his shooting schedules, but he refuses to be unnerving. "I’m a common man," he says with a mellow smile; "I don’t think of myself as a star". In fact, it’s somewhat serene speaking with him. Words that he utters sound almost lyrical, his expression is unparalleled, rare to find. There’s childlike fascination in my questions, whilst he responds as a balmy preceptor.

Mediocrity is produced everywhere, even in Hollywood or India. Nothing can be absolute; you can’t have a hundred per cent art. Look at paintings, it’s been such a long time and how many Sadequain(s) have we produced?

He’s been able to manage his work life well with his personal. Married to Professor Rakhshanda Hussain and father of three, he reflects back upon striking a balance with ease, despite having dabbled into all possible mediums of performing arts, in front of and behind the scenes.

"It’s natural; it’s my responsibility to take care of them. They do complain at times, for instance my family’s travelling today but I couldn’t join them since I’d committed to shooting. But by the grace of God, I’ve been able to look after my wife and children," he said in his baritone voice with contentment. "Shakayat tou hoti hai, but they know that’s my responsibility as well."

He’s also close to his grandchildren; I ask him if they know what their abuelo’s occupation signifies. "They do," he responds as his face lights up before he adds, "and they love me". From here onwards, Talat Sahab delves heavily into the craft of thespianism, how the industry functions today and a bit of reminiscence of the good old days. Excerpts from our tete-a-tete follow:

The News on Sunday (TNS): First and foremost, what’s the process like getting into the skin of a character and has your method changed with time?

Talat Hussain (TH): There’s no ‘method’ I’d say, in fact, I have very strong reservations against it. Be it for a drama or a radio play, I read a lot on what acting was all about, but what taught me to understand the psyche of any character came from one of my mentors, Fazal Kamal Bhai, marhoom, who told me to study psychology.

And I did just that; I studied psychology and I began reading all sorts of segments in newspapers. With that, I started understanding human nature and the differences between characters. And it continues to date; I still read and think, and observe people around me to pick up hints on what, why and how they’re doing something. I keep all of that in mind, so when I read a script, it comes automatically to me.

TNS: Have characters ever taken a toll on you or adversely affected the person you are in real life?

TH: No, not really. I read some biographies of great people in acting, and the one that I liked the best was of Paul Muni. I found out that he was such a fine actor because he kept it in his power to get in and out of a character whenever he wanted. In fact, I’ll tell you a little story. I was in America when my agent from London called me and told me that somebody is casting Asian actors to perform Shakespearean characters at a festival dedicated to his plays.

So I went to see the casting director, she saw my CV and asked me how old I was; I was about 28 at the time. She was astounded and questioned me on how I could get into characters so convincingly, win all these awards and yet not be paid for it? Then she started talking about mental disturbance. She asked me if I saw a psychiatrist, which apparently many American actors did, and I didn’t. I told her I didn’t come from a very rich country and I could not have that kind of luxury (laughs). She ended up selecting me, but unfortunately, that festival could never take place.

TNS: You’ve starred in several foreign films and series. What do you think you brought back to Pakistan?

TH: I went to study theatre and I learnt realism and depth to the art of acting and directing, and knowing what they truly are. I don’t like to talk about myself in such a way, but I can tell you that when I started out in 1966, all the other actors coming to television were somehow or the other following the acting-style of films; I wasn’t, I was very realistic and would underplay, I’d say. In my opinion, I introduced realistic acting to Pakistan. There were a lot of directors who understood exactly where I was coming from, but for actors, I feel you always must have an example. That’s what I brought back to Pakistan.

TNS: At what point did you decide that you wanted to return?

TH: I came back because I knew I had gone from Pakistan for a while and I wanted to come back. I always had this idea that it was ‘my’ country, which I love very dearly and I love its people. I lived in England two months under five years, I could’ve opted for British citizenship at the time as well, but I didn’t. If I’d reached a certain point and delivered there (internationally) without coming back, other youngsters would’ve followed suit.

TNS: This also brings me to deserved-esteem. How respectful do you think the industry at large is to veteran actors?

TH: Yes, people love you, there’s no doubt about that; but in our country, when an artist -- an actor or a painter, writer or a novelist for that matter -- ages, he’s not acknowledged for the artist he truly is. He is only respected by a certain number of people. But it doesn’t make a difference as long as you know what and who you are, you are the best person.

TNS: What’s your take on the way characters are written for veteran actors like yourself?

TH: I feel that’s a very sensitive question and I wouldn’t necessarily want to answer that, but since you’ve asked me, I will. You see, an actor is an actor. He is always recognised in comparison with his colleagues who are not as talented. At the moment, it’s become very commercial. Only some of the serials that are aired on TV are excellent, otherwise, most of them are very regular stories of marriage or something of such sort. As long as we don’t start looking at the society the way we should as creative people, or don’t strive in order to understand our true being, this will continue.

TNS: Does that mean Pakistani viewers are settling for mediocrity?

TH: Mediocrity is produced everywhere, even in Hollywood or India. Nothing can be absolute; you can’t have a hundred per cent art. Look at paintings, it’s been such a long time and how many Sadequain(s) have we produced? How many people are as gifted as Mehdi Hasan, even a quarter of him? In the society we live in, people have just started accepting the performing arts as a profession and not necessarily a place for creative people. It’s a process that’s going on everywhere in the world; people who realised its importance and significance earlier, have prospered.

TNS: Lastly, you’ve also worked with a newer bunch of filmmakers. How do you think cinema has evolved through the years?

TH: I must tell you something. Chupan Chupai was a film I did last year with my former students from the National Academy of Performing Arts. I remember them being very hesitant about telling me how they wanted me to do a certain scene and weren’t in agreement with my interpretation. So, one day I took the director (Mohsin Ali) aside on-set and I told that being a student is one thing, but being a director is another. Only he knows what he wants, and I told him I’d leave if he wouldn’t tell me how he wanted it to play out (laughs).

Coming back to your question, even in Hollywood, all films are not classics; it depends on what director is making what kind of a film. I feel, cinema is doing quite well as a lot of directors have the right approach, but I can’t speak of how long or how far we will go with that. You must remember that filmmaking was declared as a 20th century art form and with art you always have to be very sensitive. You have to practically understand human situations around you, and around the world. The more you’re able to understand that, the better your work is.

A giant still roams the Earth