There is resurgence of Punjabi language and literature 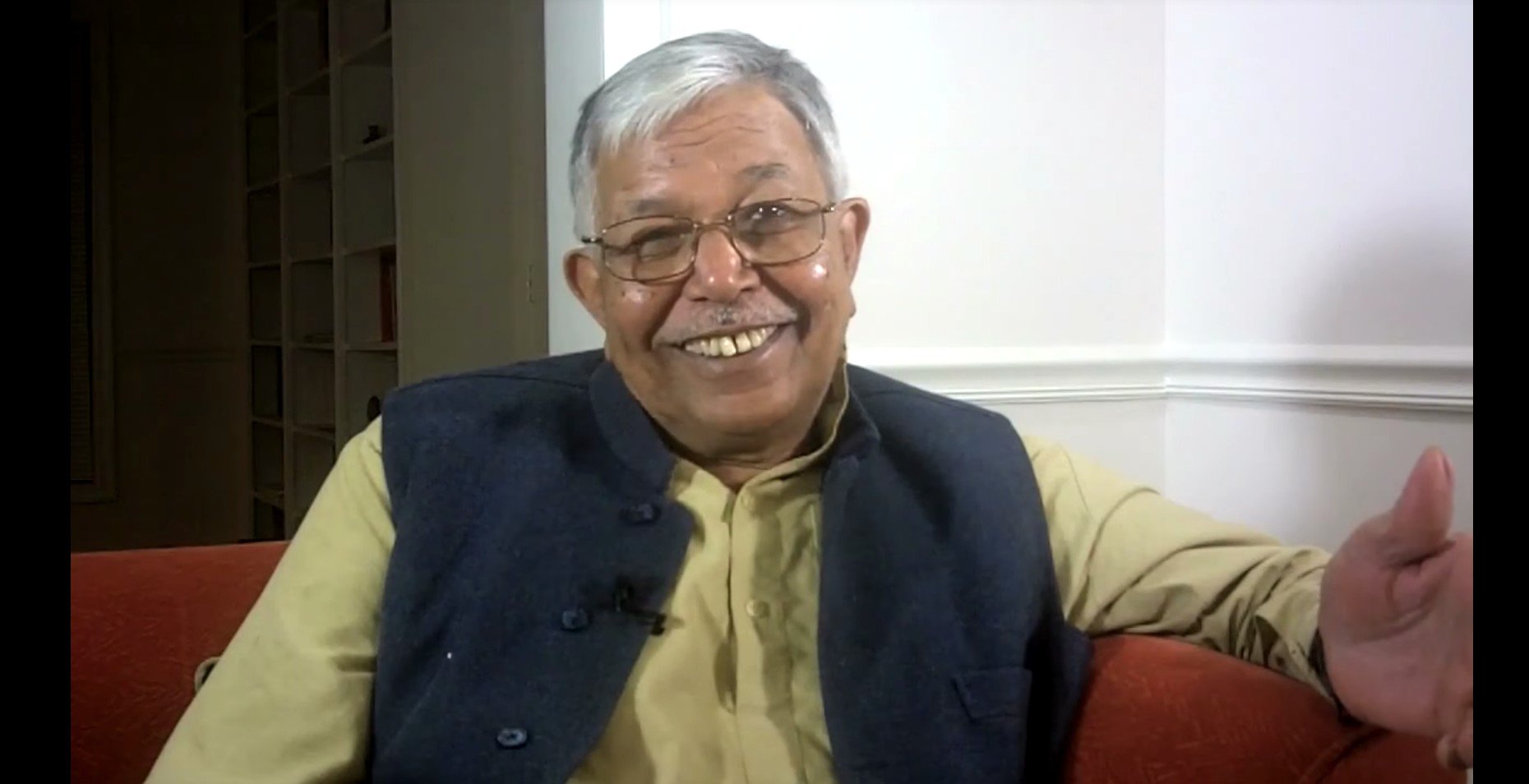 Poet, writer, columnist, playwright, philosopher, economist and crusader of Punjabi, Dr Manzur Ejaz believes the present affluence in Pakistan would bring a positive change and a liberal secular, progressive party is likely to emerge. He thinks religious extremism is a local phenomenon and an outcome of ‘Green Revolution’ both in East and West Punjab. "Instead of confronting religious movement, Bhutto gave in to religious extremism and it was further strengthened by Gen. Ziaul Haq and accelerated by the Afghan war."

Although critical of the role of politicians which paved way for martial laws in the country, he is optimistic that ultimately civilian supremacy will be established in Pakistan. According to him, all federating units have stakes in Pakistan except the Baloch who are not economically integrated in the federation.

My interpretation is that honour killing is on the rise because now people are challenging old values. People are now doing anti-traditional things.

Dr Manzur Ejaz studied till class 8 in a village and then moved to Montgomery (Sahiwal) where he became editor of the college magazine. After doing his graduation, he landed at the Punjab University’s Philosophy Department. A Maoist and one of the founders of National Students Organisation (NSO), he also taught at the Punjab University. Later, he decided to open the first progressive bookstore, Punjabi Adabi Markaz, at Mozang, Lahore which became a hub of intellectuals of the left.

Dr Manzur published about 38 books in one year which included Quqnus (Phoenix), a play written by Major Ishaq, President of Mazdoor Kissan Party, and Eqbal Ahmad’s younger brother Saghir Ahmed’s book. While at the Punjab University, he started publishing a Punjabi magazine Rut Lekha and established a progressive literary group ‘Nai Log’. Shahid Mehmood Nadeem and Fahim Jozi were part of the group. Dr Aziz ul Haq and Professor Azizuddin Ahmad used to attend its meetings off and on. In his own words, it was the first Punjabi journal to publish serious socio-economic issues besides poetry and fiction.

He was also instrumental in establishing an intellectual forum called ‘History Group’ at the Punjab University which was later on shifted to the house of the icon of Punjabi, Najm Hosain Syed.

Then he went to the United States where he did first a masters in Economics and then a PhD. He has to his writing credit Epistemic of Development Economics, his PhD thesis; My People, My Thoughts; Ranjhan Yar (a play); Nazmaan, and Waris Shah Nama (4 volumes). He claims his major work is the interpretation of Waris Shah in five volumes.

Dr Manzur Ejaz was in Lahore to attend an International Punjabi Conference at LUMS where he spoke with The News on Sunday for this interview. Excerpts follow.

The News on Sunday: Let’s begin with the magazine Rut Lekha?

Dr Manzur Ejaz: It was in 1974 that we started this magazine called Rut Lekha. It was a new experiment in which, for the first time, socio-economic topics were discussed in Punjabi. It continued for some time but could not sustain due to financial constraints.

TNS: What were the reasons for you moving to the United States?

ME: The reasons were economic. In the United States, we formed the Academy of the Punjab in North America (APNA) and started a new tradition of producing literature both in Gurmukhi and Shahmukhi. Then, we also published Kalam Nanak which was a thick classic of almost two thousand pages. Most of the copies were distributed for free because the cost was so high that our comrades were not able to pay the price.

TNS: How do you look at the study circle at Najm Hosain Syed’s place, retrospectively?

ME: It was very productive and useful. In hindsight, I would say it was a unique experience. It is still going on as they still meet every Friday

TNS: How do you look at the future of Punjabi?

ME: I am very optimistic about Punjabi because I know that at the Punjabi Adabi Markaz we used to publish five hundred copies of a book in Punjabi and they would last for years. In the early 1970s, there were only three books available at the People’s Publishing House (PPH): Trinjan by Ahmad Rahi, Nawi Rut by Amrita Pritam and Saway Pattar by Professor Mohan Singh. Now if you go to bookstores, you will find a whole section of Punjabi books.

In the early 1970s, there were only five or six Punjabi writers who would get together at the Punjabi Adabi Sangat. Now I see in every city, even in your city Faisalabad there is a ‘Punjabi Sulekh Mela’. It is indicative of the resurgence of Punjabi language and literature, although I would still think it needs a mammoth political movement -- just raising the Punjabi slogan is not enough.

When we talk of a political movement, the initial work in that direction was done by Mazdoor Kissan Party (MKP). MKP was the first party which took up Punjabi very seriously at the political level and even published its circular and proceedings in Punjabi. I think the traditions set by MKP are going to be revived in some other form by some other party.

TNS: Are you optimistic that such a party could emerge?

ME: I am very optimistic. I think circumstances are such that the emergence of a new political force is inevitable. The economic revolution during the last forty years, particularly in Punjab and generally in Pakistan, and the changing mode of production has created a crisis of identity. Now, for the time being, the identity crisis is being filled by religious groups because the state is promoting them.

My own study and analysis is that ultimately a progressive identity or a more secular liberal identity will prevail.

TNS: There is no doubt that modern gadgetry and mechanisation prevail everywhere, but one does not see the political consciousness which was there in the 1960s of last century?

ME: If you go to a village, you will see cars and motorcycles etc. Everybody has a cellular phone. My personal perception is that this creation of wealth and affluence has made people comfortable, and that is why for the time being they are not looking for alternate ideas. But as this process matures, in my judgement, the demands of individuals and society are going to change in which new thinking will emerge. For example, arranged marriages are becoming a rare phenomenon now.

TNS: But, at the same time, ‘honour’ killing is on the rise, even in cities like Lahore?

ME: My interpretation is that honour killing is on the rise because now people are challenging old values. Previously, there were no honour killings because nobody was challenging these values. People are now doing anti-traditional things. So what I am trying to say is that the system is in a melting pot. Overall, the system of values is being challenged from within; although it has no ideological expression as yet in mainstream politics. I think conventionalism, traditionalism and religious ideology is a temporary phenomenon. Ultimately, given the new factors -- new mode of production and new interaction of ideas --
the way of life is going to change.

TNS: Let’s come back to the Punjabi question. Without making it a medium of instruction and without economic incentives, why would people adopt Punjabi? Even Urdu is receding in cities?

ME: I agree. Unless Punjabi is adopted as a medium of education and taught as a serious subject, there will be no jobs and students will have no interest in it. A part of Punjabi elite is now conscious of the issue, and that is why Punjabi is now being taught in private institutions like LUMS. They have also held a Punjabi conference.

TNS: Tell us about that Punjabi conference.

ME: It was a good experience; as the organisers indicated in their speeches it was for the first time that a Punjabi conference was being held in LUMS. The panel was very good. I spoke on the "socio economic transformation of Punjab".

TNS: What do you think are the reasons behind the decline of Pakistan People’s Party, particularly in Punjab?

ME: I think there were no fresh ideas in the first and second tenures of Benazir Bhutto. It was basically carrying on Zulfikar Ali Bhutto’s legacy and his base of support. I think the PPP started copying the politics of Nawaz Sharif -- that you have to amass a lot of wealth to remain [relevant] in politics. Do you see any legacy of the Benazir’s period, any development, any highway?

There was need of a new ideology, re-creation of ideology. They lacked that imagination. I think when the last PPP government started under Zardari in 2008, it was interested in everything but the welfare of people.

TNS: You were a student of philosophy. How did you become interested in economics?

ME: Since I was interested in philosophy, I was introduced to Marx and Engels. So I thought that without studying economics, I won’t be able to understand them. I found that most development theories have been derived from Marxist literature. If you look at the human development theory in economics, you will see that it is basically a Marxist proposition which they blew it into full fledged capitalist theory. Even the quantitative in economics were introduced by Marx. Marx was the first who used mathematic in economics in elaborating economic theories. The theory of business cycle is also directly derived from Marxist thinking. I think my philosophy background served me quite well to study economics.

TNS: Tell us about wichaar.com.

ME: The idea was to produce an online website where we can share ideas and discuss literature and politics as a regular newspaper. In America, the State Department and Defence Department use wichaar material for different purposes while in Canada, they are using the material on the website for students.

There is resurgence of Punjabi language and literature