Suraj pay Kamand is a book that covers history, idiosyncrasies, achievements as well as shortcomings of left leaning students of Karachi and Lahore 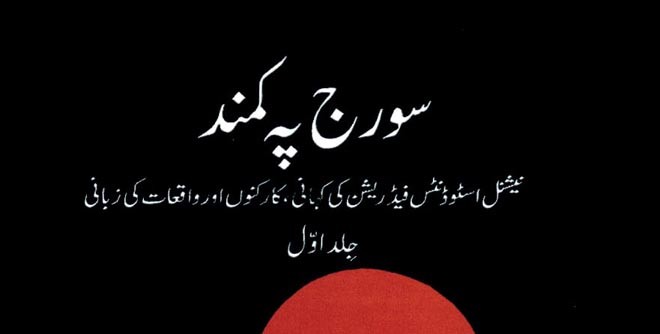 Revisiting our own past is painful but not a thankless job. In many ways, it shakes and breaks many ideals, yet in final analysis it helps new generation to find new lines in the light of old mistakes. Reluctance to revisit the past is common, especially among ideological groups yet it is a fact that apart from strong opposition no one can stop it ever.

Suraj pay Kamand by Hasan Javed & Mohsin Zulfiqar is a recent effort to revisit a section of Left history, precisely related to student activism, commonly known as student politics. Generally speaking, it covers history, idiosyncrasies, achievements as well as shortcomings of left leaning students of Karachi and Lahore. There is nothing of Left politics in the archives. Such publications will help future researchers and historians and other Left groups to add to this subject. They can also challenge and amend if the need arises. I remember, when as editor, a decade back I started publishing long autobiographical interviews in a Left journal, many elders and friends did not like the idea of talking about the Left politics yet workers and young researchers showed great interest in it. Interestingly, authors of this work used and acknowledged that resource.

The CPP went underground after mid 1954 when majority of the leadership and activists were either jailed or they remained underground.

In the last two decades we have witnessed many books, memoirs and compilations about student politics including Revisiting Student Politics in Pakistan by Iqbal Haider Butt published by Bargad, 2009, whose preface was written by Khurshid Husnain, an old leader of National Student Federation of Karachi University (1971-6). In his interview in this book, Khurshid, a professor of physics in QAU, says, "The leftists shared ideals of a revolution: justice, compassion and the desire to free the world. However, in retrospect I can say that their division was unrealistic and some of the divisive debates were unwarranted. For example the pro-China and pro-Russia debates, internal controversies on the legitimacy of Naxalite movement in India. All such debates had no practical consequences for the progressive movement in Pakistan. We did not do our homework and had myopic views of life."

Authors Mohsin and Hasan Javed have done their best to acknowledge the struggle. At the same time they have registered myopic, narrow-minded and prejudiced approach. Unlike many books published in the past, it is not just praise of the golden days. Hasan Javed told me that in the next volume they will share in-depth analysis of student movement in general and rise and fall of Left leaning student politics, including NSF, in particular. Current volume consists of 110 short sketches based on memoirs and interviews of students associated with Democratic Student Federation (DSF) and NSF.

While analysing the past it is important to separate facts from analysis -- that always helps readers and researchers to understand reference to the context largely. Those who have read pre-partition documents related to underground communist struggle in the subcontinent like 280 pages Nehru Report of 1928, India & Communism, a secret report about Indian communists published from Punjab in 1933, knew it well that there were more than one centre of struggle in South Asia including one in Lahore representing areas later called West Pakistan with relatively lose central command of Mumbai.

There were numerous communist groups in struggle other than CPI like Congress Socialists, Kirti Kisan Sabha, Lal Party etc and after partition like many parties, CPI too had to divide itself into two parts for India and Pakistan in February 1948. CPI Punjab headquarter, 114 McLeod Road, became new central office of the Communist Party of Pakistan. Central command remained lose in the party yet Pindi, Karachi and Dhaka merged as new centres of struggle as recorded by senior comrade Eric Rahim in his interview. As it was formative times there were communist groups out of CPP too.

The party remained intact despite many odds. A malicious campaign in media against Progressive Writers Association (PWA) was launched by Liaquat Ali Khan’s government when it organised its first open session in Lahore in November 1949. From Pindi Conspiracy Case in March 1951 till 1954, until the party was banned by the state with two separate orders in East and West Pakistan, comrades were pushed to the wall. During that time, the party had formed numerous groups in students, labourers, peasants and writers and Democratic Students Federation (DSF) was one of them. DSF was merged in All Pakistan Student Organisation (APSO) in December 1953 as mentioned by Hasan Javed on page 86.

There are tiny details about APSO which was the first effort to unite progressive students in Pakistan. Comrade Kamal Lohani, in an interview, mentioned a meeting between East and West Pakistan communists in 1953 in East Pakistan and like student movement in Karachi, East Pakistan Student Union had launched a movement against CM East Bengal Norul Amin the same month (January 1953) and young Lohani went to jail for the first time. But literature about APSO is still missing, and authors claimed that Dr Sarwar was its president. Did any other group, other than DSF, join APSO?

The CPP was banned along with its sister organisations, including APSO, but it was wrongly mentioned as DSF many times in the book. Interestingly, founding session of APSO was presided by infamous A K Brohi, the then law minister.

The CPP went underground after mid 1954 when majority of the leadership and activists were either jailed or they remained underground. That situation compelled progressive students to join a newly-formed pro-establishment student organisation NSF and silently and dramatically they turned it into a radical one.

Whether it was planned or situational is not known and needs some attention. Eric Rahim who left Pakistan in November 1958 and was very close to Hassan Nasir, did not mention that development. He said that when he left Pakistan Tufail Abbas, Jamal Naqvi and Nazish Amrohi were not in district committee Karachi. Underground party was running separately in Karachi, Pindi and Lahore but Major Ishaq was trying to reunite it. The book has claimed that Sher Afzal Malik and Ziauddin Khan became president and general secretary of NSF in 1957 and turned it into a radical organisation.

The NSF participated in many movements during the Ayub, Yahya and Bhutto periods against rulers. In 1966, it was divided in pro-Moscow and pro-China groups that damaged it and later on it further divided in many more groups. In late 1960s, the Baloch, Pakhtuns and Sindhis had their separate student wings while National Student Organisation emerged in the Punjab. Although none of them succeeded, there has been little effort to analyse the whole phenomenon.

In this regard books like Suraj pay Kamand may help in many ways. Some important names like Raja Anwer, Pervaiz Rasheed, Ameer Hamza Virk, Ahmad Ali Butt are missing from it but with this resource of 110 sketches one can easily move forward. Hopefully, the second volume will address the riddles and we will have straight facts.

Saving for the future