Mehmood Booti, the city’s only official waste dumping site, is being turned into a public park, after it reached its capacity 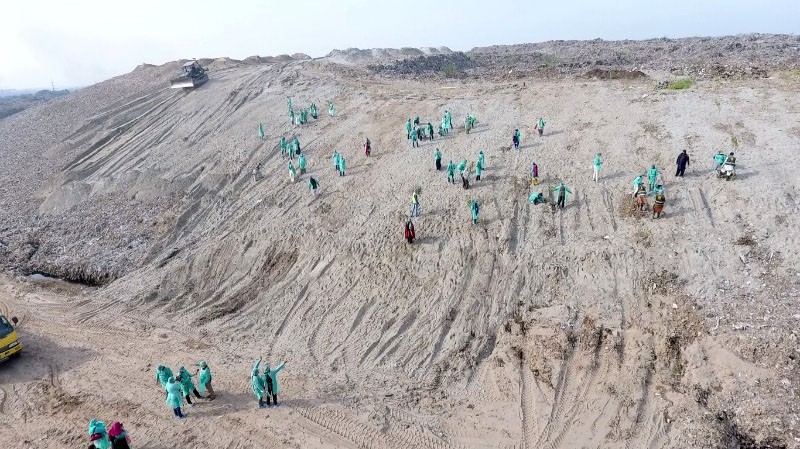 Work has begun to convert Mehmood Booti, the city’s only official dumping site, into a public park. The reason cited by the Lahore Waste Management Company (LWMC) is that the site reached its capacity -- 25,00,000 tonnes of garbage heap.

The labourers can be seen at work, covering the huge mass of garbage with soil and silt. Their next step is plantation of about 10,000 trees.

Booti, which stretches over 320 kanals of land, was set up as a landfill site in 1997. Two years ago, it was replaced with a new landfill at Lakhodair, about two kilometres away.

Talking to TNS about the technicalities involved in converting the site into a park, the LWMC Manager Operations Adeel Pervez reveals that Mehmood Booti dumping site is filled to capacity, and there is methane gas, leachate, and other organic components in the garbage.

Lahore produces 6,500 tonnes of garbage daily, and the population of the city has exceeded one crore. On the other hand, the LWMC has employed only 15,000 sanitary workers.

"The immediate and most daunting challenge for us is to capture methane gas," he declares. "For the purpose, gas vents have been installed at the site.

According to Pervez, Pakistan does not have experts who can help in dealing with the environment at the landfill. Help from foreign experts is needed in this regard.

The first step in the conversion of the landfill site into a park is terracing, levelling, and cutting of the huge heap of garbage in order to stop it from collapsing and turning into a slide. Over four feet of soil is being layered on the heap, and excessive water used to make the land favourable for plantation.

The Parks and Horticulture Authority (PHA) Director Headquarters Shahzad Tariq says the authority planted 300 trees at the site "on experimental bases." He admits that the project needs a huge budget. The moment government releases funds, the PHA will get working.

The LWMC has sought assistance from the PHA in planting the said trees. "Frankly speaking, a lot of technicalities are involved in this project -- for instance, civil work, feasibility reports, engineering, and techniques of capturing the gases emitting from the heap of garbage," he adds. "It’s a first-of-its-kind project, and needs commitment and funds for its completion."

The LWMC Senior Manager Communication Ali Mazhar believes that the success of the project depends on the government’s priority and interest levels. "If the government releases funds early, the project will be completed in time."

Mazhar contends that conversion of a landfill site may be a new idea in Pakistan, but in other countries it’s a common practice. He gives the example of South Korea which recently converted such a site into a football stadium. However, he insists on the importance of a collaborative effort to keep the environment and city clean.

"Lahore produces 6,500 tonnes of garbage daily, and the population of the city has exceeded one crore. On the other hand, the LWMC has employed only 15,000 sanitary workers. So, it is upon the citizens to understand their responsibility. They should not throw litre. Besides, they should use biodegradable plastic bags."

In this connection, the Environment and Horticulture Society of University of Engineering and Technology (UET) recently took part in plantation of trees at the site. Dozens of varsity students volunteered.

Ali Mazhar insists that the Punjab government should involve multinational companies as well as the Cooperate Social Responsibility (CSR) in the project. "It will help to improve cleanliness in the city in general and the surrounding areas in particular.

"There is no recreational park for the public near Mehmood Booti, along the Ring Road. I hope this park, once it is completed, shall be a good public resort," he says.

The news augurs well for the owners of cold storages on the Ring Road, in front of the Mehmood Booti landfill. They say the site had been shut for two years after it reached its capacity.

"I hope that this park shall contribute to raising the value of our properties," says one cold storage owner. "It’s a good way to utilise a wasteland. Besides, the area will now be free of foul smells that filled the air."