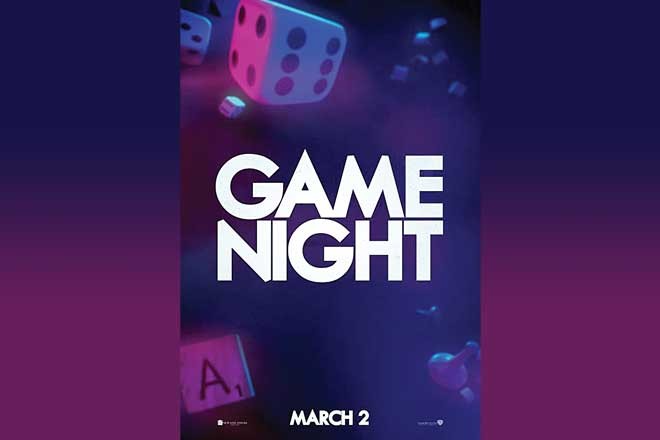 Farce is a beast to get right in movies. The fact that Game Night hits the mark more often than it hits a wall is cause for cheering. Hell, if you have Jason Bateman and Rachel McAdams to play the game-loving marrieds heading a cast of merry pranksters, you’re already ahead of the game. I wasn’t thrilled that the rowdy Mark Perez script fell into the hands of directors John Francis Daley and Jonathan Goldstein since they perpetrated the 2015 remake of Vacation on an unsuspecting public. But high spirits carry the day as Max (Bateman) and Annie (McAdams) organize another night of charades, Pictionary, Trivial Pursuit, Scrabble, Monopoly or any other game that allows them to show off their hyper-competitive, pop-culture smarts, mostly to duck the subject of child-bearing that Max fears. They sound obnoxious, but Bateman’s dazzling deadpan can raise tired zingers to raucous life with only a throwaway eyebrow lift. And McAdams takes to comedy with a natural actor’s grace and precision. Talk about fun company. They’re it.

And they’ve lucked out with their comic cohorts. As Ryan, Billy Magnussen is cluelessly hilarious trading quips with his current date, Sarah (Sharon Horgan). As Kevin and Michelle, the other married couple, Lamorne Morris and Kylie Bunburry use jokes to ease Kevin’s pain about Michelle’s alleged fling with a celebrity during a brief separation. Was it Denzel Washington? Morris’ impersonation is killer. And so are the games, especially when the gamers struggle to identify Ed Norton while mentioning every other actor from infinity to beyond who once played the Hulk. And did I mention Gary (Jesse Plemons), Max and Annie’s neighbor, a divorced cop so devoid of personality that the gamers invent any pretext not to invite him? Plemons damn near steals the movie with his sad-puppy eyes turning creepy as he suspiciously spots three bags of Tostitos in Max and Annie’s shopping bags. They lamely insist it was a 3-for-1 sale, to which Gary counters with statistics: "How would that be good for the Frito-Lay company?" If this kind of nonsense tickles your funny bone like it did mine, you’re in the right place.

It’s when the script tries to over complicate things that the movie hits a rough patch. The trouble starts when Kyle Chandler shows up as Brooks, the better-looking, more successful brother Max has resented for years. It’s Brooks who invites the gang to his posh house to play a mystery game in which one of the group will be snatched by paid actors and the others will have to follow clues and figure out how to save the poor sucker. But as everyone struggles to figure out what’s real and what’s bogus, the movie loses traction. The elaborate plot slows down the movie with car chases, bar fights and guns with real bullets just when you want to hang with the characters and get to know them better. Don’t worry, almost no one gets killed - except for the bad guys. Danny Huston and Michael C. Hall have a blast playing two of the baddest. No worries. Even as Game Night spins out of control, you stick around for the inspired lunacy. It’s party time.

On August 21, 2015, three American buddies from Sacramento - Spencer Stone, Anthony Sadler and Alek Skarlatos - were vacationing in Europe. The Air Force medic, Oregon National Guardsman and college student at Sacramento State, respectively, left Amsterdam together and boarded the high-speed 15:17 Thalys train to Paris. Ayoub El Khazzani, a Moroccan-born terrorist, was also on board; he was armed with a AK-47 assault rifle, a 9mm Luger pistol, a box cutter, a hammer, gasoline and a backpack with enough ammunition to inflict mass casualties on more than 500 passengers. Soon after leaving the first class rest room, Khazzani emerged shirtless, shot a passenger and barreled deeper into the train, where Stone charged at him. Luckily, his assailant’s AK-47 jammed - but the gunman still sliced the back of his neck with the box cutter. With the help of Sadler and Skarlatos, who used the man’s weapon to knock him unconscious, a bloodbath was narrowly averted. French President Hollande awarded them the Legion of Honor. President Obama called with congrats and cheers for their bravery. On their return to the United States, they were given a heroes welcome.

It’s a hell of a true story - and director Clint Eastwood resolved to tell it without the bullshit Hollywood trimmings. Stars? Who needs them?!? The veteran filmmaker went far - some would say too far - by casting Stone, Sadler and Skarlatos to play themselves. These three men knew their own lives intimately. But could they act them? It’s a ballsy, Dirty Harry-worthy move - the kind of thing we love Eastwood for. It would make our day to report that the filmmaking legend, who’ll turn 88 in May, pulled it off with flying colors.

That didn’t happen. The incident on the train lasted about two minutes, and Eastwood directs the event for every ounce of nerve-frying tension. The only problem? There’s another 92 minutes to fill. Cue the flashbacks to the lives of these heroes as they grow from boys to men, two of them raised by single mothers and all of them attending a Christian middle school. Acting pros Jenna Fischer and Judy Greer play the moms; Veep’s Tony Hale shows up as their gym teacher. But the fact remains: the three men had never acted before. And as far as we’re concerned their record is clean. (In interviews, the men spoke of who they’d have liked to play them: Sadler thought of Zac Efron; Skarlatos wanted Michael B. Jordan; and Stone, thinking outside the box, hoped for Denzel Washington. If wishing could only make it so.)

Through no fault of their own - hey, you try acting without training- these non-pros simply can’t bring the film to vivid life. They get scant help from first-time screenwriter Dorothy Blyskal, who adapts the mens’ published account of their experience in The 15:17 to Paris: The True Story of a Terrorist, a Train and Three American Heroes with a dispiriting flatness. That the point, to show how good, old-fashioned American heroism can rise out ordinary behavior, and the idea sounds fine in theory. But onscreen, the film just lays there, bidding its time with travelogue shots of the boys at bars, dance clubs and European tourist attractions until their big, all-too-brief encounter with fate. Eastwood inserts quick glimpses of the train action ahead, but not even he can’t stop the film from making "idling" its default position.

It didn’t have to be that way. Chances are missed to detail the lives of other people on the train - like Mark Moogalian, who sustained a gunshot wound to the neck. Or English businessman Chris Norman, who thanks to improvising with some cable and a necktie, managed to subdue Khazzani. And what about investigating the post-trauma readjustment period, which Eastwood managed so effectively in American Sniper and Flags of Our Fathers?

More frustratingly, the script presents Khazzani as a cardboard villain, the alien other so much easier to dismiss for being rendered in simplistic terms. The book, written with journalist Jeffrey E. Stern, creates compelling drama by tracking the young man and the events that led to his radicalization. There’s none of that here. What’s left is a rousing tribute to three Americans whose courage under fire is indisputable, who managed to take action in the face of paralyzing fear and turn a would-be disaster into a rescue mission with no fatalities. But the complex movie that might have been is still on the drawing board, teasing us with a deeper story that’s disappointingly out of reach.