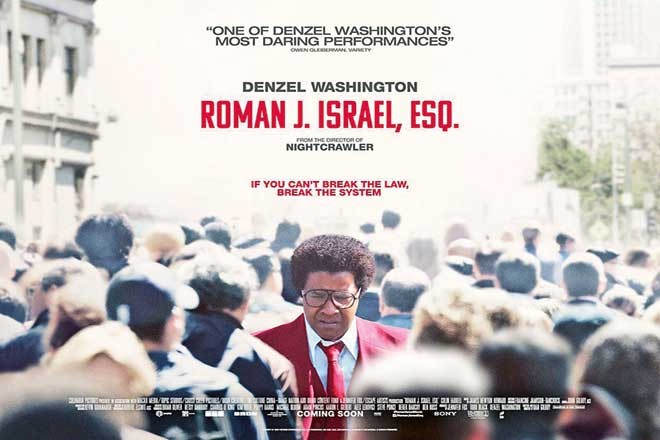 Denzel Washington turns in his most un-Denzel-like performance as the titular Roman J. Israel, Esq. a socially inept (to put it mildly) but idealistic and highly intelligent (he’s got the California legal memorised) lawyer whose carefully ordered life is suddenly thrown off-kilter when his partner suffers a heart attack. Faced with the prospect of unemployment, Roman first tries his luck with a non-profit legal aid firm run by Maya (Carmen Ejogo, very good) and then finds himself working for the impeccably groomed, smooth-talking George Pierce (Colin Farrell), a former student of his former partner’s. We’re never quite sure (to writer/director Dan Gilroy’s credit) of where Pierce’s moral compass lies but it is Roman who finds himself in a possibly unethical bind where some of his decisions may have disastrous consequences.

Washington is absolutely terrific as Roman but the movie itself doesn’t quite work up its way to a resounding ethically-legally challenging climax that the character and the performance deserved. The plot doesn’t quite work. Still it is an interesting film elevated by a terrific performance.

Washington has been nominated for an Oscar for Best Actor at this year’s Academy Awards. He was also nominated in the same category at the Golden Globes and SAG awards.

Cut to chase: Denzel elevates an interesting film with a fascinating central character but which needed a tighter plot.

Phantom Thread is the second teaming of writer/director Paul Thomas Anderson and leading man (and triple Best Actor Oscar winner) Daniel Day-Lewis after the powerful, majestic There Will Be Blood.  It is also purportedly Day-Lewis’ final film as he contemplates retirement (he’s been semi-retired before - Thread comes five years after his last film, Lincoln). So the movie comes saddled with high degree of expectations. And while it doesn’t quite live up to those lofty expectations, it is still an intriguing, absorbing, observant, sumptuously detailed and photographed (Anderson also serving as cinematographer) film that is deflated by an unexpected climax that doesn’t quite convince.

Day-Lewis is (as you would expect) very, very good as renowned dressmaker Reynolds Woodcock in post-war, 1950s London. But even better, I dare say, are the arch Lesley Manville as Reynolds’ sister, Cyril and European actress Vicky Krieps (she comes from Luxembourg) as the inscrutable Alma, the designer’s latest muse/mistress. Reynold and Cyril run the fashion house, The House of Woodcock, and they are dressmakers to royalty, film stars, heiresses and socialites. Reynolds is fastidious, self-absorbed and completely devoted to his craft. Young women regularly come into his life on a temporary basis to serve simultaneously as muse, mannequin and mistress while his unsmiling, mostly disapproving sister looks on. Then Alma, a young waitress, enters their lives and she doesn’t quite prove to be a product off the assembly line that Reynolds has been used to. A quiet power struggle ensues which heads down unexpected pathways that are fascinating and riveting (and sometimes blackly funny). If only Anderson had been able to persuade us with his ending.

Cut to chase: An absorbing, macabre romance let down somewhat by an unconvincing climax.