A legacy to fight for 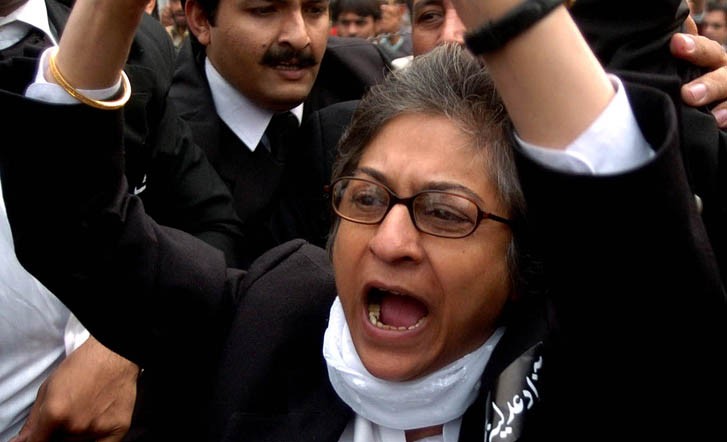 Asma Jahangir died an ordinary death. After being beaten multiple times, given numerous death threats and becoming the target of the ire of millions of people, she was brought down by a mere heart attack. Not only is it ironic, it is also unusual for a Pakistani woman who has fearlessly taken on the establishment.

And it shows. There are no fantastic promises of eradicating injustice, no incredible vows to carry on her work, no uproar, no seething outrage that such a beautiful person was taken from the world. No, there is none of that, and the reason is simple. Asma Jahangir was not murdered. She was not killed in a terrorist attack, or by the vengeful family of some poor woman she helped or in some other horrific manner that we’re perfectly used to. She died a mundane death.

To be sure, there are people expressing regret, and deeply felt pain. But if my Facebook feed is any indicator, those people are disproportionately women. But that isn’t surprising; resenting and denigrating powerful, self-assured, successful women who have the audacity to stand up for themselves and for others is a well-known phenomenon. It is unsurprising that such women are rarely supported vociferously by anyone other than others like them. It is similarly unsurprising then, that the response to Asma Jahangir’s death has been so…civilised.

That she died, however that may have been, was inevitable. But the way she lived, that was not. That was a choice she made; that was what made her Asma Jahangir.

Asma Jahangir died a mundane death. So there is nothing to protest about; no reason to hold a rally. She wasn’t disappeared, so there is no need to take to the streets to demand her return. Asma Jahangir isn’t a martyr, so she is not a cause to pretend to rally around. And that too may be a good thing -- at least we didn’t use her corpse to demand that more "terrorists" be executed and that the war against whatever it is against in Waziristan be escalated. At least her death has not been appropriated to become a symbol of the worst of who we are. No, her death has just been treated as an end.

And that may be fine. After all, death is an end for those who die. But death can also be powerful, if we remember that there are those who live, and they are still alive. Asma Jahangir certainly never forgot them. She fought for them, and fought for them more, and when she couldn’t do any more, she kept fighting. Asma Jahangir fought for a better world till her heart literally gave out. That she died, however that may have been, was inevitable. But the way she lived, that was not. That was a choice she made; that was what made her Asma Jahangir. That Asma Jahangir should be remembered.

For that Asma Jahangir, there is something worth protesting about; this country has no shortage of causes. For her, we should hold rallies to support the causes she fought for. For her we should take to the streets with our moral outrage. She did not die violently, and we rightly should not be morally outraged at her death. No, we should be morally outraged for her, just as she was when she lived. And just as she built from her anger little havens of peace, so, too, should we.

Five years ago today, my father and brother were killed brutally. Asma Jahangir did not fight for them. Unlike everyone else, she had a good reason -- she was busy fighting for someone else.

Now Asma Jahangir is dead, leaving behind a legacy to fight for. What’s our excuse going to be?

A legacy to fight for