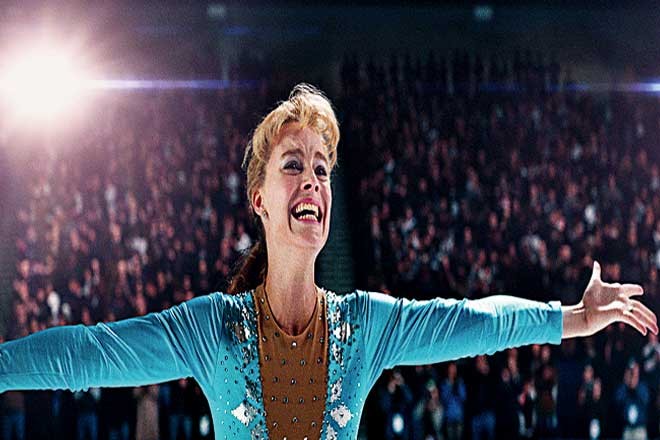 In 1994, American Olympian ice skater Tonya Harding became embroiled in a scheme to injure fellow American and rival Nancy Kerrigan and stop her from competing in the Olympic trials. The result was a sensational scandal, non-stop media coverage and, ultimately, an American tragedy. What else would you call a tale of a stupendous talent (Harding was the first American woman to complete a triple axel in competition) who (almost) rises to the top but is brought down by not only her own weaknesses but also a system to which she refuses to conform?

I, Tonya is a darkly comic retelling of this tale powered by some terrific performances. Margot Robbie captures both Harding’s physicality (her powerful skating routines never sat quite right with the US figure skating association which preferred their female competitors to be more lady-like and demure; she was heavy metal to Kerrigan’s unthreatening pop) and pugnacity as well as her inability to break away from the negative influences around her. Robbie is more than ably backed up by Allison Janney, as LaVona Harding, Tonya’s abusive, withholding mother, who believes the ideal way to get her daughter to perform at her best is to rile her to anger. An almost unrecognisable Sebastian Stan (Marvel’s Winter Soldier) plays her inept and equally abusive husband, Jeff Gillooly who believes he is only helping Tonya. The final villain of the piece (though this point isn’t as quite convincingly made) is the media as well as us, the voracious consumers of the 24-hour news cycle and pop culture and scandal.

I had rather liked 2012’s Ek Tha Tiger which introduced us to Salman Khan’s Indian RAW agent avatar, Avinash Singh Rathore aka Tiger. Salman’s larger-than-life persona had been toned down to good effect by writer/director Kabir Khan and in service of a decent script and the action sequences were quite well done. Similarly, Salman Khan actually portrayed a reasonably fleshed out character in writer/director Ali Abbas Zafar’s quite watchable Sultan (2016).  So I had hopes for the Tiger sequel.

However, while Tiger Zinda Hai has smashed box-office records (it’s Salman’s biggest money-spinner yet), it’s a comedown from the first movie in the franchise. Inspired by certain true-life events (which weren’t quite as dramatic as presented here), the movie has Tiger coming out of retirement to save kidnapped Indian (and Pakistani) nurses in ISC (read ISIS) held Ikrit (read Tikrit), Syria/Iraq before the USA bombs the city. The plot is full of conveniences and has huge holes and characterisation is at a minimum, playing largely to stereotypes and clichés. Even the action sequences range from the very good (two of the best revolve around Katrina Kaif’s ISI agent / Tiger’s wife Zoya) to cheesy (the scene where Tiger takes on a pack of wolves near the beginning of the movie comes to mind) to awkwardly amateurish.  Salman is Salman in his best Rambo/Sultan Rahi mode complete with going shirtless as he flexes his pecs and mows down all the bad guys. However, the above being said, I see no reason why our local censors refused to allow the movie to be screened in the country. The movie is neither anti-Pakistan nor anti-Islam.