Sheikh Mujib and the birth of Bangladesh-II 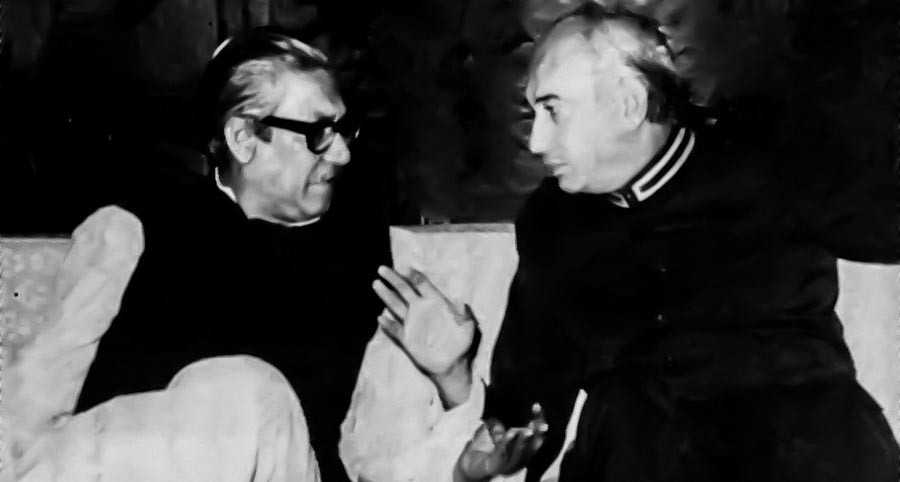 In a previous article, we highlighted the critical role of Sheikh Mujibur Rehman -- the much-extolled and the much-maligned charismatic leader of the Awami League who was the main protagonist of the idea of Bangladesh as embedded in the 6-point programme. Mujib, who inherited the mantle of the head of Awami League from Hussein Shaheed Suharwardy -- the only leader of an all-Pakistan stature from East Pakistan -- was unable to face up to the challenge of filling the political vacuum of his leader, whom he fawningly called "the Boss".

To overcome this lacuna, he sought the help of the East Pakistani intellectuals, especially the economists, in preparing a strong case for East Pakistan’s autonomy and in providing his 6-point plan a firm intellectual basis. While he was confident about the political side of the equation and of achieving a sweeping victory in the forthcoming election, Mujib tasked his economic team to ensure that his 6-point agenda would be credible enough to pass the scrutiny of the West Pakistani technocrats as well as the world at large, especially the donors. Mujib wanted the 6-point programme to be taken beyond the level of election rhetoric and be presented at the negotiating table and to the CA as a serious Constitutional proposal.

The Bengali economists, with few exceptions, saw Mahbubul Haq to be the architect of the inequitable policies of the Ayub era.

Both the military and the West Pakistani politicians assumed that the 6 points were designed as a basis for negotiations. The Pakistani political establishment, led by the military junta, believed, or at least tried to project that the 6-point plan was a code word for secession. No major political player in West Pakistan was willing to recognise the 6 points as a legitimate, politically-mandated basis for framing the new constitution. Instead of engaging Mujib and Co. in a serious debate to bring out the complexities and non-viablity of their proposal, the West Pakistanis resorted to innuendos and non sequitur assertions to discredit and defame their opponents.

The quintessential task Mujib assigned to his economic team was to build the 6-point agenda into the Constitutional framework to be approved by the National Assembly after the election that would ensure a mutually credible basis for the two regions for living together as one nation. Mujib was fortunate in having access to a galaxy of East Pakistani economists, many of whom had frequently articulated East Pakistani economic grievances and were sympathetic to his political agenda. Most of them were teachers at Dacca University, which had inherited a veritable reputation for its Economics Department before Independence. Many of them voluntarily chose to enlist themselves as Mujib’s soldiers to fight in the trenches of Islamabad’s power structure and argue the Bengali case in the media and other fora available to them.

Mujib entrusted Professor Nurul Islam, the eminent Professor of Economics of Dacca University who was on leave of absence to serve as the first Pakistani Director of Institute of Development Economics in Karachi, to collect a group of dedicated East Pakistani economists to serve as an informal "think tank" and prepare an "economic manifesto" for East Pakistan (and eventually for Bangladesh).

Read also: Sheikh Mujib and the birth of Bangladesh

Although the Harvard Advisory Group (HAG) in the Pakistan Planning Commission is often perceived by many as the ideological incubator of Bangladesh, the majority of East Pakistani economists, viewed it with considerable suspicion and mistrust. Instead, they viewed it as "an ideological inspiration of the state-sponsored capitalism and West Pakistan-centric policy priorities of the Ayub regime". Gustav Papanek, who was once a deputy head of the HAG mission, eulogised the development ethos of the Ayub regime and argued in favour of the ‘social utility of greed’. Dr. Mahbubul Haq in his earlier incarnation under HAG’s aegis also incorporated the ideas of top down growth that underpinned Pakistan’s Second Five Year Plan and his influential book The Strategy of Economic Planning.

These ideas ran diametrically against those of equitable growth - both inter-personal and inter-regional that were espoused by the East Pakistani economists and were later embraced and enthusiastically championed in the global context by Dr. Haq in the latter part of his professional career. With the unraveling of Ayub’s Decade of Development strategy, the successor Yahya and Bhutto regimes sent the HAG packing, partly in an effort to put the onus of the dismemberment of Pakistan on the US (Bhutto went even so far as to say goodbye to growth and to declare a plan holiday for the Fourth Five Year Plan period).

The Deputy Chairman of the Commission, usually a very senior bureaucrat (which effectively excluded any East Pakistani from occupying the post), was seen as much more powerful than the finance minister. Other senior positions, including the Chief Economist, Members and Chiefs of Technical Sections, in the Commission were also generally filled by West Pakistanis, with a few exceptions. Prof. A.F.A. Hossain, who was appointed a member in the final years of a united Pakistan, was among the senior Bengali economists, along with Dr Habibur Rahman and Dr R.H. Khandker, as well as bureaucrats such as A.M.A. Muhith and Dr M.A. Sattar, who were inducted to reduce the conspicuous imbalance. The professional head of the Commission was Dr M.L. Qureshi, a political appointee until Dr. Mahbubul Haq, who began his career there as an Assistant Chief Economist soon after obtaining a Ph.D. from Yale and was finally elevated to the position of Chief Economist around 1968.

The continued marginalisation of the Bengali intellectual elite not only alienated them from the ruling power structure, but also brought a sense of cohesion among them, which was conspicuously lacking among their West Pakistani counterparts, who were receiving a windfall of privilege and power, based mainly because of their ethnic and linguistic credentials.

The East Pakistani economists compensated their lack of heft in the Planning Commission by using other fora for their tenacious critique of Pakistan’s development strategy. The main forum they used for this purpose was the Panel of Economists for Pakistan’s Second, Third and Fourth Five year Plans. The Bengali economists, with few exceptions, saw Mahbubul Haq to be the architect of the inequitable policies of the Ayub era.

In response to this criticism and with the rising crescendo of criticism against Ayub, the Planning Commission decided to take the exercise of Panel of Economists, consisting of experts from both East and West Pakistan, more seriously for the Fourth Five Year Plan, which was in early stages of preparation.

The issues of social inequality, which probably affected West Pakistan more than East Pakistan, turned out to be even more problematic. Even in this case, the East Pakistani economists, less constrained by political pressure, took the initiative in raising issues of challenging the economic power of the elite. This was illustrated by an anecdote described in Rehman Sobhan’s memoirs relating to land reforms, a topic which was on the agenda of the Panel for the Third FFYP. But the Nawab of Kalabagh, one of the biggest landowners in the Punjab and a symbol of feudalism in the country, was so incensed to hear about it that he called the Deputy Chairman of the Planning Commission, Saeed Hasan, to ensure that the Panel refrained from discussing such a sensitive issue. The PC obsequiously deferred to his wishes and M.L. Qureshi unceremoniously wound up its proceedings. Later, in private, Mahbub apologised for not supporting the Bengalis, saying that he was "but a humble minion of the government of Pakistan and (that) his interventions were overridden by more powerful forces".

The Panel on the Fourth Five-Year Plan was much better organised and taken more seriously because of its relevance to the coming general election and Mujib’s looming victory. It became the final battleground between the two sides at a professional level. The East Pakistani members included Nurul Islam, Akhlaqur Rahman, Anisur Rahman, Rehman Sobhan and Dr Mazharul Huq (who in his capacity as president of the Pakistan Economic Association, was elected to Chair, in preference to Dr. Mahbubul Haq, who was not considered to be neutral). The West Pakistan contingent included Professor Matin of Peshawar University; Professor Rafiq Ahmad of Punjab University, Professor I. A. Mukhtar (IBA) Karachi University; Dr Parvez Hasan, the Chief Economist of the West Pakistan Planning Department; Dr Moeen Baqai of the State Bank of Pakistan and Dr Mahbubul Haq, who had been elevated to the position of Chief Economist in 1968.

During the discussions on the Draft Fourth Plan, the members of the Panel of Economists from East Pakistan, in which both Anis and Rehman Sobhan played a key role, vigorously argued for tipping the transfer of resources in favour of East Pakistan in a significant way. The East Pakistanis focused on two key targets: first, a significant deceleration of West Pakistan’s growth rate to 5.4 per cent from the 6.8 per cent achieved by it in the 1960s, along with a much sharper reduction in West Pakistan share of net foreign inflows to 8.7 per cent from the 91.3 per cent it had been receiving during the Third Five Year Plan period -- or almost a total reversal of fortunes of the two regions. The acceptance of such a dramatic reversal in the overall development strategy - at least in spirit - as impossible as it seemed, was the only way to prevent the oncoming national disaster. The West Pakistani economists, however, were more concerned that such a drastic change in strategy would spell a disaster for the West Pakistan economy.

In view of the very serious differences that had emerged between the members belonging to the two "wings" in the Panel of Economists, it could not agree on a consensus report and the two groups decided to submit two separate reports. Anis, while saying goodbye to his West Pakistani colleagues in the Panel, said: "It is unfortunate that you did not yield. We shall need a visa to see you next time." Unfortunately, his prophesy turned out to be true.

Rehman Sobhan also relates a similar anecdote about an exchange with a West Pakistani member of the Panel, Dr. Parvez Hasan. At one of the highly-charged sessions of the Panel in Karachi, Rehman Sobhan, admittedly in a fit of rather high emotion, exchanged some hot words with Dr. Parvez Hasan, who blurted out to him - prophetically, as it transpired - "if you go on ranting (about West Pakistani atrocities) like this, we will do such things to you that it will make you shiver."

Both sides tried to present their case regarding disparity between East and West Pakistan and what might be done to reverse this process. While the East Pakistanis made a most impassioned plea and were seen to be on a higher moral ground, the West Pakistanis were on the defensive and relied on hope and good intentions to convince that the West Pakistani predator leopard will soon change its spots. When the West Pakistani economists tried to assure that they were willing to concede a much larger share of net foreign aid to East Pakistan, Anisur Rehman reportedly expressed not only disbelief, but also to have reparteed that "West Pakistanis would rather hand over real political power to the Chinese than give it to the Bengalis".

It is most unfortunate that a promising relationship between the two sides had to end so acrimoniously and the two separate reports could only serve as an intellectual requiem on two decades of conflict between the academics as well as policymakers of East and West Pakistan.

Sheikh Mujib and the birth of Bangladesh-II