The pre-Partition Anarkali bazaar was traditionally a place for socialising and intellectual discussions, over food or cups of tea, and hence, full of interesting stories 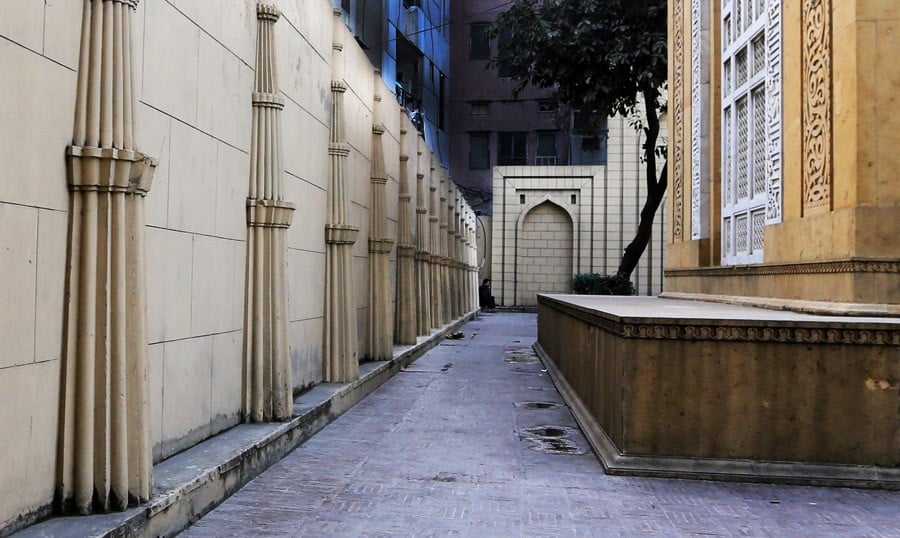 Walking down the Katchehry Road, the busy intersection leads to the historic Anarkali bazaar.

Lined up with innumerable shops, the bazaar is swarmed by people roving about. Passing through the maze, the deafening noise of bikes and cars honking, the jangling bells of the bicycles and the blaring screams of the auto drivers seem inescapable. An old pushcart vendor selling roasted corn on the cob attracts a crowd with its refreshing aroma that is too enticing to ignore in the cold of the winter.

A few miles ahead, there is the famous Bano Bazaar that was once the breeding ground (so to say) for several love-at-first-sight stories. As author Pran Nevile narrated to me in person, young boys and girls from the nearby Oriental College, Punjab University, and Government College (now University) would stroll around in the Anarkali bazaar. The well-lit, albeit narrow, street of Bano Bazaar allowed the lovebirds the proximity they desired.

If you move straight through Anarkali towards Circular Road, you meet Paan Gali, another narrow alley sometimes referred to as the "Little India." Well, the market was set up in 1947 for the sale of paan (beetle) leaves in the newly established Pakistan.

Both Manto and Chughtai are said to often visit the Anarkali bazaar. Manto once bought a chappal for himself, while Ismat chose an embroidered khussa.

Interestingly, most shopkeepers in the Paan Gali migrated from India. Currently, the place boasts 40-odd shops that have a huge collection of Indian manufactured goods ranging from ayurvedic products, organic soaps, coconut oil and shampoos, bindis and banarsi saris. The writing on most of these Indian packages is in the Devnagari script.

While these shops in Anarkali bazaar remain crammed with people and activity, the ghastly state of the houses in the area tell tales of desolation. Broken windows, crumbled pillars, collapsing roofs, and the decaying walls -- all murmur a wistful elegy on Anarkali’s glorious past. It’s a past that enshrines memories from the days when the bazaar was a favourite haunt for the subcontinent’s intelligentsia. The writers and intellectuals would spend days and nights here, alternating between writing and literary discussions, over hot cups of tea.

It was in 1944 that Saadat Hassan Manto was tried for obscenity for his short story, ‘Kaali Shalwar,’ and Ismat Chuhtai’s most celebrated short story ‘Lihaaf’ was written off as being provocative. Eventually, the Lahore court summoned them. Both Manto and Chughtai are said to often visit the Anarkali bazaar. Manto once bought a chappal for himself, while Ismat chose an embroidered khussa.

In an essay on Chughtai, Manto mentioned that in Bombay (now Mumbai), he received a postcard from a gentleman in Hyderabad asking why he and the lady didn’t marry. Around the same time, a conference of progressive writers was held in the city where many girls approached Chughtai to ask here why she didn’t marry Manto. Although the two literary greats had met in Lahore, Manto wondered why only the people of Hyderabad were interested in his marriage to Chughtai.

As Anarkali was traditionally a place for socialising, sharing ideas, building stories, and of course, eating and drinking for illustrious authors, professors, and intellectuals of the sub-continent, there are several interesting anecdotes that are known to have taken place at the bazaar.

Dr Nazir Ahmed, the former principal of GCU, and professor of zoology, was a close friend of Rajinder Singh Bedi. In a book, he mentions Bedi’s fondness for chappals at the Anarkali bazaar. According to him, he sent Bedi a pair through a friend who was travelling to Bombay. When Bedi received it, he wrote a letter to Dr Ahmed, saying, "Aap key jutey miley, sar tasleem e kham!" (I’ve received the pair of shoes, and I bow before you).

A short story tells us how journalist, poet and playwright Safdar Mir rented out a house in a three-storey building in Anarkali. Once, Muzaffar Ali Syed visited him, and they both were enjoying a conversation over a cup of tea, when the postman delivered a letter. Mir opened it, and found that it was written in Gurmukhi. He quickly stepped out of the house, into the bazaar, and returned accompanied by a Sikh. Mir requested him to read out the letter. It was from noted Bollywood actor Balraj Sahini. The Sikh read the first line, and cracked up, "Dear Safdar, I have just finished writing a play in Gurmukhi and was thinking of you. I didn’t feel like writing in English. I know you live in Anarkali, and there are many Sikhs in your neighbourhood. You will definitely be able to find a Sardarji to help you read the letter for you."

Mir and Syed both had a hearty laugh. The Sikh stopped reading the letter. When asked why, he said, "Balraj Sahini just used swear words; I can’t read them out loud." Mir asked him who did he swear at? Sardarji replied: "I don’t know, but it’s someone named Radcliffe!"

Seven decades after the partition, there are several eerie impressions of the Delhi city that still echo in the heart of the Anarkali bazaar. Hidden from the main buildings, there is a rather murky pathway along the road. Here, the first thing that you notice is a plaque that reads in Urdu: "Delhi Muslim Hotel." The place was once an inn, known as Serai Mohammad Shafi. It wasn’t until 1929 that it was turned into a hotel.

Before the partition, the hotel served as the space for political meetings mainly organised by the Muslim League. Post partition, the area became a posh locality and, hence, the hotel gained popularity among the aristocrats. Later, in the mid-‘60s, the hotel turned into an art centre when the remarkable Maharaj Khathak operated a dance academy behind the hotel and also had his permanent residence there. Music and dance stalwarts such as Nusrat Fateh Ali Khan, Naheed Siddiqi, and Sabri brothers often visited the hotel.

Unfortunately, the hotel is now in shambles. Its rooms have been destroyed and it is nothing more than a single-bloc villa. The Maharaj Kathak’s academy has vanished. The locals are using the barren area for garbage disposal.

It was during the mid-1940s that Saadat Hassan Manto, Rajindra Singh Bedi and Krishan Chander were drinking at the residence of Bari Alig. Having finished their dinner, the three drunken friends took to the streets in Anarkali bazaar. They walked with tablespoons kept on their shoulders, and chanting the famous slogan from Khaksar Movement: "Chap rast, chap rast!" They made their way into the Qutbuddin Aibak’s Mausoleum behind the Anarkali bazaar. Reaching close to the outdated yellow structure, Bedi shouted in a loud voice: "Dilli ka Quttub Minar dekho!" Manto answered back: "Aur Lahore mai Qutbuddin Aibak ka mazaar dekho!"

History tells us that Aibak died in Lahore in 1210 A.D., in the middle of a game of polo. In the early 1970s, his mausoleum was renovated on the orders of the then prime minister of Pakistan, Zulfikar Ali Bhutto.

Right across the road, there is the dilapidated Bansi Mandir, lying in a state of disarray. Half of the neglected building was destroyed by angry mobs in the aftermath of the Babri Mosque attack in India.

A minute’s walk away, there is the Nagina Bakery. This used to be the prime meeting place for the literati. In the ‘40s, as some new cafes and restaurants came up on the Mall Road, the literati shifted their meeting spot from the Arab Hotel, Railway Road, to Nagina Bakery. The group included big names such as Chiragh Hassan Hasrat, Sahir Ludhianvi, Faiz Ahmed Faiz, Bari Alig, Saadat Hassan Manto, Maulana Salahuddin, among many others.

Unfortunately, the bakery was shut down, some years ago. A stationery shop now stands in lieu of it.

Muzaffar Ali Syed narrates an incident in a column, about his frequent visits to Nagina Bakery while he was studying at Government College, Lahore. On one such visit, as he was gorging on "aalu tikki" and sipping "chai," he overheard somebody next-table saying in a loud voice: "Prem Chand aik banya tha." He heard the same voice again. Curious, he approached the table, only to find Maulana Salahuddin of Adabi Dunya, Hasrat, and Manto sitting together. Salahuddin banged the table yet again, with his fist, and shouted: "Prem Chand aik banya tha!"

After Manto introduced them to him, Syed asked Salahuddin why he was calling Prem Chand a "banya." Salahuddin replied: "Prem Chand sent me his short story to publish in Adabi Dunya, demanding Rs10 as remuneration. When I told him that I could pay Rs8 only, he asked me to send the story back. I sent him a letter, trying to convince him to accept Rs9 but he refused."

After hearing the story, Syed asked Maulana whether PremChand was a "banya" or he was one? This amused both Manto and Hasrat no end.

Lahore’s vibrant cultural life might have declined over the decades, but still in the evenings when the chaos of the Anarkali bazaar that deals mostly in Chinese-made commodities dies out, one finds elderly men sitting at small dhabas, discussing the demise of the Soviet Union or Halqa e Arbab e Zauq and the Progressive Writers’ Association. They are, perhaps, the last torchbearers of the past. These are the people Faiz referred to as ‘lovers’ in ‘Aur niklain ge ushaaq kay qafilay’ (Processions of the lovers will move out).