A narrative of decline?

At a two day conference at the Habib University Karachi, speakers discussed the fluid nature of South Asia, as demonstrated by it overlapping literary, religious and cultural traditions 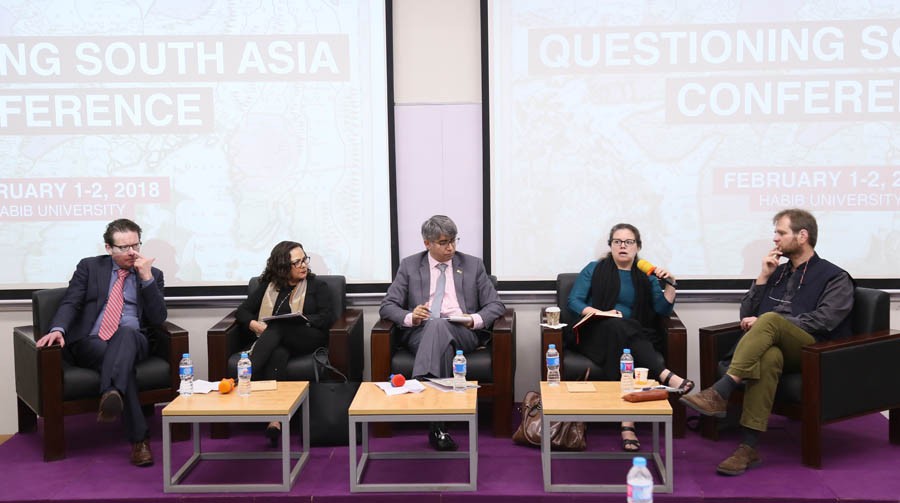 Is it not a paradox that study centres on South Asia are only to be found outside South Asia? Seldom do we see research coming out of Pakistan that factually explores themes around the region other than from a security lens. And what a woefully myopic worldview our centres for knowledge production are imparting when the state hardly allows for critical discourse on Pakistan itself.

It is this gap in the academic discourse that Habib University sought to fill by hosting a two-day conference, titled ‘Questioning South Asia’, which saw the participation of scholars from as far as the US, UK and Canada, along with local academics.

"Pakistan Studies was conceived in the aftermath of the secession of East Pakistan," Aasim Sajjad Akhtar, who heads the National Institute of Pakistan Studies at Quaid-e-Azam University, told the audience at the conference. "It was a barely disguised attempt to propagate the state’s historic narrative of choice. At the cost of the academic disciplines of History and Geography, all public-sector universities were required to have one after General Zia."

In another session, Saba Pirzadeh from LUMS asserted that it is through literature that we can have a discourse over how war affects environment, and how aggressors see the ecosystem as hostile or utilitarian spaces.

While Pakistani universities do not offer a comprehensive understanding of the region in general, and Pakistan in particular, several speakers echoed the view that there was also an asymmetrical dominance of India over South Asia Studies abroad, primarily due to strong Indian lobbying and generous donations.

Yet, with the dawn of CPEC, things have turned around for Pakistan, and the country has once again gained prominence as a subject of study from a politico-economic perspective. But CPEC is not a singular project. What Edward Simpson, director of the South Asia Institute at the School of Oriental and African Studies, calls "carbon-intensive diplomacy" is very much at the heart of this "road building frenzy that we see across South Asia," be it the CPEC or India’s Look East Act East Road (a vision to connect Delhi with Bangkok and establish India’s sphere of influence in South East Asia). This frenzy arises from regional and international competition for political hegemony, he said, facilitated by donor agencies such as the Asian Development Bank and the World Bank in their willingness to fund such projects. There is great "enthusiasm about CPEC worldwide. Most universities in the UK have held events about it, some sponsored by the Chinese embassy, but not all".

Locally, more than 10 CPEC public and private research centres have sprung up, which are still guided by the state, Aasim S. Akhtar said. He gave a rather dim view of China’s increasing imprint on South Asia, terming it a "new hegemony". Barren lands such as Thar, Reko Diq and Saindak is where the competition is, he asserted. Enabled by technology, Pakistan’s strategic border zones have been dug up for coal, marble and granite by the Chinese, he asserted. "The most alarming aspect of it is that they are reinforcing the authoritarianism of the Pakistani state."

Over the course of two days, various speakers reiterated the fluid nature of South Asia, as demonstrated by the overlapping literary, religious and cultural traditions. "My idea of South Asia would be driving from Karachi, without getting into the sea, as far as you can go by driving left-hand," remarked Dr Edward Simpson.

Dr Markus Daechsel also from the University of London, who was the keynote speaker, said that South Asia cannot be taken as a self-contained region because "the Himalayas are not a barrier…they have been a place of exchange…If you stick too close to the national boundaries, you always end up telling the story of nation-states, where the shape of the nation state is already a problem".

In his presentation, Daechsel claimed that "the political utility or impact of history has become very limited." Whereas it was the ruling discourse during the colonial era, which prompted leading South Asian nationalists, such as Jawaharlal Nehru, Sir Syed Ahmed Khan and Ishtiaq Hussain Qureshi to counter the British narrative by writing "rival visions of their own", there has been little or no sense of history since the time of Zia-ul Haq. It is what he called "a narrative of decline that gets absurd because it just keeps repeating itself.

"In the West, we are also running out of stories to tell because we are used to the sense that we are at the helm of history and history is taking us forward. And I think by now…we find ourselves in a position that nobody is able to believe in any sort of utopia anymore. We are completely cynical that the future could be better than the past."

Having understood this, it is not hard to imagine why concepts like secularism and feminism have always been problematic in South Asia. Dr Amina Jamal from Ryerson University explained how, following the renaissance and the emergence of reason as the dominant narrative, secularism emerged in the West and was translocated to many parts of the world through colonialism, whereby it was appropriated by nationalist movements to unify communities within the nation-state. The lack of secularism’s indigenous history has meant that we cannot even come to an agreement if its Urdu translation is "ladeeniyat" or "roshan-khayali".

Additionally, Dr Karen Ruffle from the University of Toronto deplored the use of the "civilizational framework" to study South Asia -- a narrative that, for instance, stokes Hindu nationalism and ignores the humanistic portrayal of its people. "Islam is very much an Indian religion and a Muslim can also be a member of the Indus Civilization," she said, reiterating this while presenting her paper on Shiism and the 17th century Shahi Qutb Sultans of Deccan. "By using object and material practice as a device [instead] …it reveals so much more about South Asia."

Commenting on a session of the conference, writer and director of the Arzu Centre for Regional Languages and Humanities at Habib University Asif Farrukhi applauded that English professors are revisiting Urdu literature. Sarah Abdullah and Amina Wasif of Lahore College for Women University presented papers on the differing gender depictions of characters in the oral storytelling tradition of dastangoi and early Urdu fiction, and revisiting the Ayyaar-figure as the archetypal detective of classic fiction.

Jack Clift from the University of London presented his research on the subcontinent’s two imminent writers Krishna Sobti and Qurratulain Hyder and how similarly their works extended beyond the religious and linguistic barriers upheld in South Asia. Shirin Zubair from Kinnaird College studied how the media representation of South Asian women is affecting the feminist discourse. In another talk, Alexander Sean Pue from Michigan State University computationally analysed the Sonics of Urdu and Hindi poetry recitation.

In another session, Saba Pirzadeh from LUMS asserted that it is through literature that we can have a discourse over how war affects environment, and how aggressors see the ecosystem as hostile or utilitarian spaces.

Nauman Naqvi gave a talk on historical narcissism and anthropology in modern South Asia. The past two centuries, he said, have established "modern humans as geological agents," with the post-world war II era being the "age of great acceleration". This historical narcissism that we are fundamentally right has had terrible impact on religious traditions, ecology and led to the "othering" of others and sometimes of self.

A narrative of decline?