Sheikh Mujib and the birth of Bangladesh 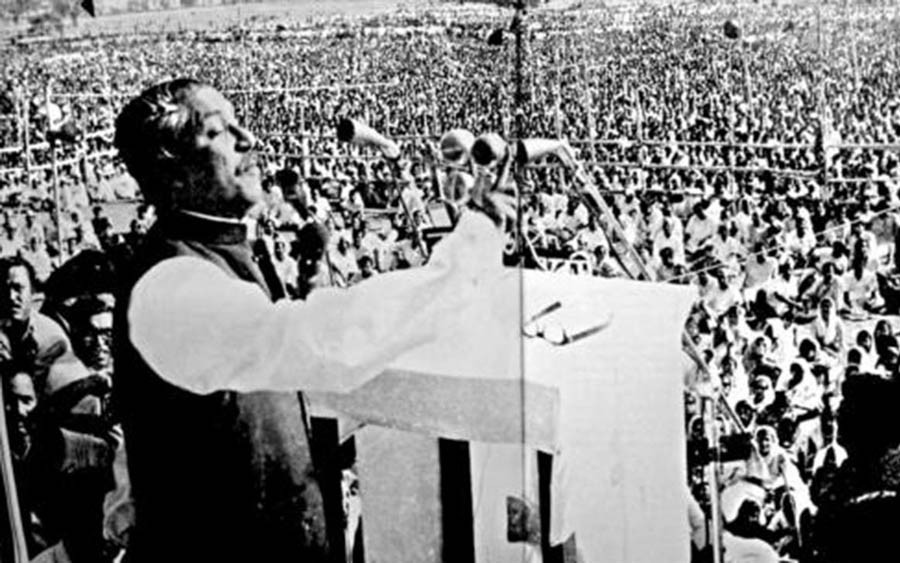 The recent provocative invocation of Sheikh Mujib’s rebellion in 1971 by Nawaz Sharif is a rather simplistic, self-serving and cavalier take on a political upheaval of the South Asian subcontinent, which had no less a tectonic impact than the mega cataclysm of partition, a quarter century earlier. The historical jury is likely to remain out for a long time on whether either of the two partitions were in the best long-term interests of the people of the sub-continent.

This article attempts to put in perspective a landmark event in undivided Pakistan’s history -- the brutal suppression, through a massive military crackdown in March 1971 of Bengali nationalists, led by academics and intellectuals, for their espousal of an autonomous and independent state. Unfortunately, Pakistani state and intelligentsia have never made amends for these abhorrent acts committed by the Pakistani Army, or seek ablution from them through a cathartic appraisal of what went wrong with our relationship.

In the end, however, nothing can take away from "Bangabandhu’s" personality and leadership style in making the final victory and the birth of Bangladesh possible.

Faiz’s poetic lament about the broken and unrepaired relationship (Hum ke thaire ajnabi or Strangers We Remain) is not enough to assuage that pain. Although these events are four decades old, it is impossible to banish them from our collective consciousness and conscience, without further damage to our increasingly narcissistic psyche. It is still not too late to raise the curtain of mystery, lift the shroud of secrecy and misinformation and take off the cloak of faux patriotism that have prevented an honest debate on the subject in Pakistan. Nawaz Sharif’s outburst provides an excellent opportunity to revisit the subject to understand seriously what went wrong.

Pakistan’s break-up just 25 years after its birth was more fortuitous than fated. It could well have been deferred, if not totally avoided, had the political leadership of both parts of the country paid greater attention to the justness, equity and viability of the terms of their union. A distance of 1,000 miles between them by itself was not an insurmountable barrier, but the step-motherly treatment meted out by the Pakistani state, particularly the bureaucratic and military elite that called the shots, towards the Bengali people did.

As the Hindu hegemony started being replaced by West Pakistani hubris in various arenas, East Pakistan developed valid reasons for complaining against the continued lack of a level playing field. The seeds of plants that later sprouted into the killing fields of 1971, had already been sown. Discontent over the centralised approach of Pakistani government began early in East Pakistan, with widespread protests as early as 1948, although the obsession with the declaration of Urdu as a national language and the 1,000-mile barrier as the only causal factors is largely misplaced.

With the locus of political power, including military and economic power, concentrated in West Pakistan, these disparities started to grow, in the absence of pro-active policies to correct them. According to the estimates then available, during 1959-60 per capita income in West Pakistan was 32 per cent higher than it was in East Pakistan. By 1969-70 this disparity -- one of the core parameters East Pakistani economists supporting Mujib’s 6-point programme emphasised -- rose to 61 per cent despite (or because of) Gen. Ayub Khan’s much-trumpeted Decade of Development.

The political grievances were no less serious. Notwithstanding his pivotal role in achieving Pakistan’s independence, Mr Jinnah was demonstrably biased in favour of non-Bengalis in his choice for key positions both at the Centre and in East Pakistan. The pedigree of political cadres he drew upon was brought and bred in stables of the affluent political elites of feudal or aristocratic origins, rather than of struggling middle class or peasant and working class descent. The East Pakistan Muslim League rapidly lost touch with the people and metastasized into a toady party. In particular, ostracising two of East Pakistan’s most popular leaders, Suharwardy and Bhashani, political ill-feelings among the province’s political class became inevitable.

Suhrawardy, who had served as the Chief Minister of Bengal before partition, was conspicuously ignored until Jinnah’s death. After its success in the 1954 elections, the Awami League formed an alliance with the West Pakistan’s Republican Party, led by Dr Khan Sahib, to lead a coalition government in Pakistan. In September 1956, the Awami League came into power both at the centre and East Pakistan -- the only time in the history of Pakistan, if only for a year. If that situation had lasted longer, the break-up of Pakistan could possibly have been averted.

With the marked absence of chemistry between the political classes of the two regions, the military -- a much more homogeneous institution, albeit with West Pakistani pre-dominance -- started making preparations for playing the coveted role of the final arbiter, which it continues to perform until today. Suhrawardy was forced to resign on October 10, 1957 and was banned from public life by Gen. Iskandar Mirza. Suhrawardy died in 1963 of a heart attack in Beirut.

Suhrawardy’s thirteen months in office did not beckon the future prospect of a Pakistani state being led by an independent prime minister from East Pakistan. His experience, along with that of  his two Bengali predecessors, Khwaja Nazimuddin and Mohammad Ali Bogra, who could hardly match his streak of independence and shrewdness, clearly demonstrated that an East Pakistani prime minister could only hold office at the pleasure of the West Pakistani-dominated establishment of bureaucrats and generals. It is not difficult to surmise that these bitter experiences of his "Boss", must have crossed Mujib’s mind when contemplating the tantalizing prospect of becoming the prime minister of a united Pakistan after attaining more than a comfortable majority of National Assembly seats in the 1970 general elections.

Bhashani was the other prominent East Pakistani politician who was as much an anathema to the West Pakistani establishment, as he was popular among the peasant masses of East Pakistan. In 1948, Bhashani, along with his followers dissociated himself from the Muslim League and formed the "Awami Muslim League" -- the ML of the people -- and later shed the word Muslim to emphasise its secular and populist orientation. The AL was further boosted when Hussain Shaheed Suhrawardy, the last chief minister of undivided Bengal, and Sheikh Mujibur Rahman, a prominent leader of the language movement who was later to become the charismatic leader of Bangladesh called "Bangabandhu", joined the Awami Muslim League in 1949.

By the end of 1968, the battle lines had already been drawn and Mujib had emerged as a major player in the game. The Army, which had become the final arbiter of the country, with the help of US Mutual Security Pact in 1954 that had armed it to the teeth to deal with any internal (mainly Communist insurgency for US, but Bengali and Baloch nationalism in case of Pakistan) or external challenges (which the US perceived as coming from Russia or China and Pakistan perceiving it as emanating from India). With the crumbling of the Ayub regime, the junta decided to take the gamble and hold elections at the end of 1970, hoping for the best.

In the wake of Mujib’s historic landslide electoral victory, Yahya rushed to Dhaka in a desperate damage control attempt on January 12, 1971. Although he gave the impression that he had come to Dhaka to meet Mujib as the future prime minister of Pakistan and negotiate on the constitutional arrangements, for a civilian takeover, his intentions were far from benign. The meeting proved abortive from the outset, as Mujib refused to show his cards until the National Assembly was scheduled to be held in March. Yahya left Dhaka in a huff and flew straight to Larkana.

The press was to be told that Yahya was taking time off for a hunting vacation at Bhutto’s feudal estate. This level of apparent intimacy between Bhutto and Yahya was the outcome of the junta’s post-election strategy. The junta, who had heavily invested in defeating Bhutto in the elections, to thwart his possible alliance with Mujib -- Hum Idhar, Tum Udhar, now sought to use him as an ally to frustrate Mujib’s emerging ascendancy. In the first exchanges with Bhutto, Yahya is reported to have burst out, "We must fix Mujib."

During the next two days momentous decisions were taken about the fate of the country. At the Larkana meeting, a strategy was laid out as to how Bhutto would set up the political preconditions for a postponement of the NA session, scheduled to be convened in Dhaka on March 3. Bhutto was accompanied by a large PPP entourage. Bhutto was more interested in negotiating a share of power with Mujib rather than discussing the mechanisms for implementing a constitution based on 6 points.

The specifics of the PPP-AL talks are still an enigma shrouded in mystery. But it is fair to assume that what was offered to Mujib by Yahya was, most likely, too little and too late. It was impossible for Mujib to retract from his 6-point agenda -- the people’s expectations had been raised well beyond that. Moreover, there was a complete lack of confidence between the two.

On March 25, 1971, the Pakistan Army made its pre-emptive strike in Dhaka hoping that the rebellion will be crushed and the Mukti Bahini will surrender. Instead, the operation backfired, helping the rebellion to galvanize into a full-scale freedom struggle, later capitalised by the Indian Army - which was avidly waiting to pluck this low-hanging fruit and accept the humiliating surrender of Pakistani armed forces on December 16, 1971.

In the end, however, nothing can take away from "Bangabandhu’s" personality and leadership style in making the final victory and the birth of Bangladesh possible. While he has been berated and demonised by many, especially in Pakistan, for his coarse and uncouth brand of politics, he outclassed any populist leader of his times, including Bhutto, in achieving his political goals and in keeping his party together by locking horns with a military behemoth, whom the mightiest opponents feared to tweak.

Mujib "eschewed the elitist style of South Asian politics conducted behind closed doors that could be easily pressurised and lent itself to compromise". He firmly believed that the Bengali masses needed to be mobilised in any struggle that fundamentally challenged the hegemonic rule of the Pakistan state over the Bengali "natives". He sought to reach out to mobilise this mass base in the campaign for contesting the 1970 elections. The depth and breadth of his political appeal made a massive victory in the December 1970 elections a certainty. As a political leader with sensitivity to the pulse of the masses, Mujib had no equal. Can that be said for Nawaz Sharif or, for that matter, for any other Pakistani leader?

That he was later undone by his own success, is an irony he tragically shared with two of his more celebrated South Asian contemporaries, Bhutto and Indira Gandhi.

Note: The article liberally draws on the following books written by two eminent Bangladeshi economists, Rehman Sobhan and Md. Anisur Rehman, who played a leading role in the liberation of Bangladesh:

Sheikh Mujib and the birth of Bangladesh