At the edge of Manora

In a world so choked with extremism, an almost-forgotten temple stands triumphant 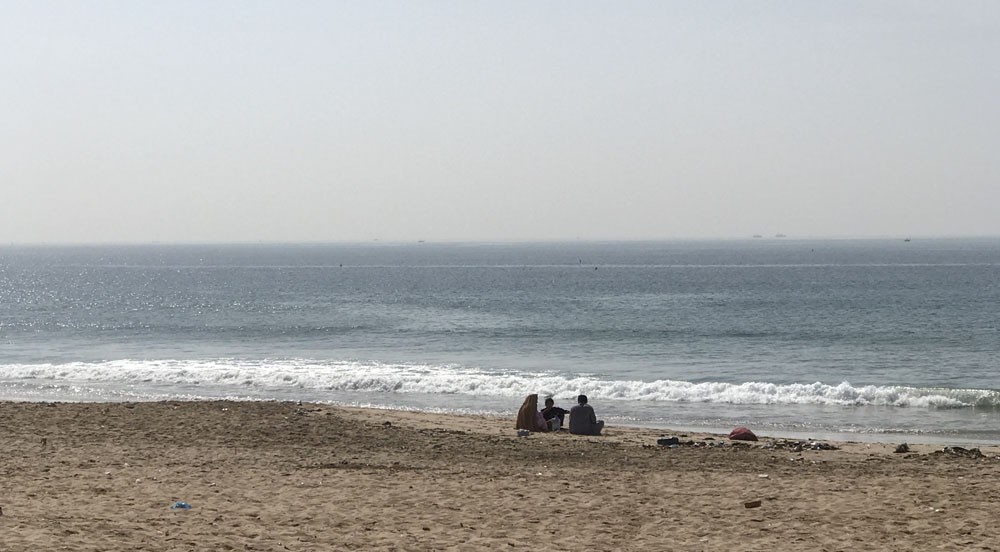 When you pull into Manora early on a Monday -- after 20 minutes of motoring through Karachi harbour’s brown, brackish water, the surface of which is dotted generously with discarded polythene bags that puff up like jellyfish -- you are struck by its quiet. The jetty is bare, littered with tangled fishnets and jagged chunks of ice that must have slipped off blocks intended to keep fish fresh, and there seems to be nobody stirring, except a man crouched on his haunches, halving guavas for sale.

The star attraction on Manora these days is no longer its lighthouse, the tallest in the country, which I remember visiting on school field trips as a little girl. Instead, it’s the Varun Dev Mandir, believed to be around 200 years old. Over the past two years, the Sindh Exploration and Adventure Society (SEAS) has undertaken the restoration of the long-neglected monument with the help of a $250,000 grant from the US Ambassadors Fund for Cultural Preservation.

The water crashing onto the sandy beaches extending across the peninsula’s southern shore is turquoise. Open-air restaurants with bright plastic chairs beneath thatched awnings dot the beach.

The best way to get from the jetty to the mandir is to walk. The long peninsula, hinged to the mainland by a 12km-wide causeway, is pedestrian-friendly in a way that virtually no area of the nearby metropolis is. There are frequent stalls selling souvenirs glued all over with shells: bracelets, picture frames, tiny hair clips. The water crashing onto the sandy beaches extending across the peninsula’s southern shore is turquoise. Open-air restaurants with bright plastic chairs beneath thatched awnings dot the beach. They serve hot pakoras, fresh fish, and trayfuls of sweet chai. It’s quieter and quainter than Karachi’s Sea View, livelier and more accessible than the sequestered huts that dot Hawke’s Bay. On a weekday, when there are virtually no tourists, all I can see on the sand is a group of fishermen napping within the folds of a beached boat, moored awkwardly in the sand.

The temple itself stands at a vantage point, overlooking the waves crashing into the seawall in front of it. Its shikhara -- a Sanskrit word that translates to "mountain peak" and that refers to the tower extending over the temple’s sanctuary -- is vaguely reminiscent of the spires of Gaudí’s Sagrada Família in Barcelona. It reaches towards the clouds as indistinguishable from the landscape as if it was a sandcastle, and yet with a confidence that commands even the ocean.

When Dr Kaleemullah Lashari and Dr Asma Ibrahim, SEAS’ founders, started documenting the temple some years ago, they were alarmed by just how precarious its state was. "By studying the geometry of the structure, we could see that it was tilted," says Dr Lashari. "We knew that it would fall if we didn’t get involved right away."

They immediately started seeking funding to restore and conserve the structure. Their immediate priority was to save the shikhara, a particular challenge because of its narrowness -- the team had to create a special scaffolding, that only one person could climb at a time, to apply the necessary binding material to the sandstone.

"It’s hard to point fingers -- the process was multifaceted and gradual," adds Dr Lashari, when asked about the factors that led to the temple’s deterioration. The environmental elements -- the salty sea breeze and the gritty particles it carries -- part of the area’s inherent charm, certainly played a role in aiding the temple’s journey towards its near-death. But the greatest period of its neglect began in 1992, after the demolition of Babri Masjid, a 16th-century mosque in India’s Uttar Pradesh state, and the months of rioting that followed between India’s Hindu and Muslim communities. At the time, the Cantonment Board shut down the temple, blocking both its entrances to protect it from vandalism and leaving it closed to worshippers for over two decades.

Further still, early efforts to restore the temple, where new tiles were applied to the existing façade with cement, decayed the sandstone beneath even more.

The temple was crucial to restore not only because of the urgent state of its decline, but because of the massive role it plays in Manora’s heritage. The tiny peninsula is rife with faith monuments -- in addition to the temple, it has a protestant church, a Sikh gurdwara, a shrine and several mosques. You experience these buildings one after another as you walk, and together they build in your mind a rich picture of how diverse the area once was. Today, the Hindu population on the peninsula numbers barely a few hundred large.

But the temple was restored for everyone -- not only for the Hindus, but for the Christians, Sikhs, and Muslims as well. During the restoration process, the team invited and involved the local community to take part, regardless of either their faith or of whether they were skilled or unskilled labourers. If they didn’t know the techniques needed, they were trained to acquire them, spending long days beneath the harsh sun, carving and documenting side-by-side. They truly came together, handing each other materials, talking while completing tasks, taking short breaks. The vision of a restored temple -- its tiles gleaming, its stairs swept clean, its doors open -- became a common goal: a product, a space, and an achievement, shared equally between everyone.

"Our vision was to create a living monument for the local community," says Dr Ibrahim, describing the courtyard the team built beside the temple, which has already served as a celebration venue for Diwali, Eid, and Independence Day.

While standing alone on the freshly laid tiles, sweating beneath the afternoon sun, I can close my eyes and picture the pebbled walkway surrounding me filled with people, laughing and talking and looking up gratefully at the star-studded sky. In a world so choked with extremism, an almost-forgotten temple stands triumphant -- the story of its survival the ultimate symbol that an interfaith, multicultural society is still possible, entirely worth dreaming of and desperately worth working for.

At the edge of Manora