Blood banks require state-of-the-art Elisa System to detect virus. In a strip test, there is a chance that the virus may go undetected 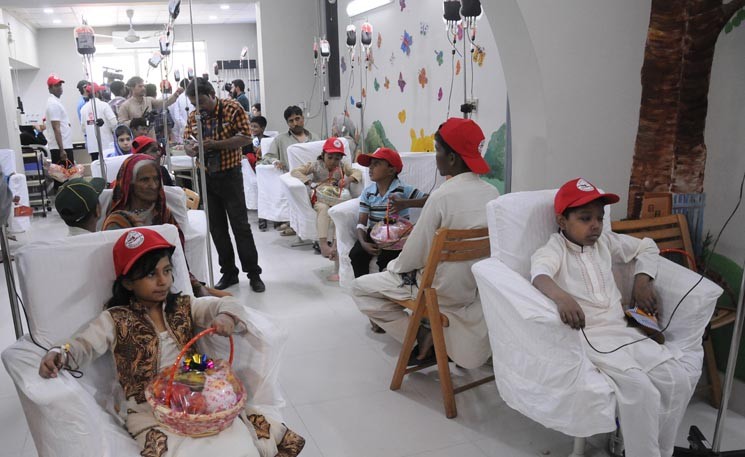 In a country like Pakistan where the rate of hepatitis prevalence is between 10 to 16 per cent, blood collectors face two obvious challenges -- how to get safe blood, and how to meet the ever increasing demand of blood.

For getting safe blood, a blood service provider follows the WHO standard of mandatory screening of H-B, H-C, HIV, syphilis, and malaria before transfusing blood to a patient. If a donor is the carrier of any of these diseases, his blood is not taken.

Testing lab and equipment should be state-of-the-art, and staff should be qualified, otherwise any error could put patients at risk of life-threatening diseases.

To a question how the requirement of safe blood could be fulfilled where the rate of HIV, Hepatitis B and Hepatitis C is high, Director Punjab Institute of Blood Transfusion Service Dr Zafar Iqbal told TNS: "Before transfusing blood to a patient blood components which are red blood cells, platelets, fresh frozen plasma (FFP) and cryoprecipitate, are separated from whole blood with the help of a refrigerated centrifuge machine or a platelet separator (aphaeresis machine). This practice does not cause blood shortage or its wastage because whole blood is not transfused to a patient, but one of its components according to the patient’s requirement.

"Attendants of patients don’t wait. They want blood test results in a few minutes’ time, and also want the same blood to be supplied to their patients. They don’t believe in blood exchange, on which the success of Elisa System depends," says an official at Ganga Ram Hospital’s blood bank.

The director said a refrigerated centrifuge machine costs Rs3.5m and a platelet separator costs Rs2.5m, and most of the blood banks of the government have these machines. During the 2013 dengue endemic, a patient had to pay Rs 3,000 to get platelets from a private lab.

Speaking on blood screening quality, Sundas Foundation Lab In-charge Dr Imran said: "Hepatitis’s prevalence rate compared to other diseases is high among blood donors, which makes it difficult to find safe blood, and requires efficient, flawless blood test method and qualified pathologists and lab staff." Unfortunately, in government labs, a device method is used for blood screening which means using a strip to test blood of a donor which costs only Rs20. This method lacks the ability to detect low infections. In many cases, where donors were tested negative by this method, they were found to carry infection when re-screened under the state-of-the-art Elisa System which is more sensitive and specific. So, we can say device method is not reliable."

According to Dr Imran, "In 2013, some thalassemia patients in a government hospital were transfused with infected blood as a result of poor quality of screening device."

The Elisa System detects even inactive virus in its carrier, which is not detected by device method. "For example, a virus gets active after three months. Before three months, if a donor undergoes blood screening his virus will not be detected by an ordinary device, which normally is used in most of the labs," he added.

"Students are a well aware community. They take care of their health and follow instructions on how to avoid viral infections. So, I suggest those who supply blood to patients have students as their donors," Dr Imran suggested.

Talking to TNS, Punjab Blood Transfusion Authority Secretary Dr Ather said, "WHO discourages blood screening from device method (ICT) and recommends Elisa System for mandatory blood screening of a donor. The authority has written to the Punjab Government for Elisa System at blood banks in the public sector," he added.

"Ideally, ICT should not be used for blood screening because it lacks sensitivity and there always remains chances of not detecting inactive virus of its carrier. In three blood banks of Punjab LCT (Lymphocytotoxicity test) is being used to test blood of a donor, which is a bit better device than ICT, but it could not be an alternative to Elisa System.

In many cities of Punjab hepatitis rate is about 16pc, which means in these cities finding safe blood and transfusion of same blood becomes very difficult. "In this situation the trend of blood exchange should be encouraged to meet the blood demand. Blood exchange means screened blood of every donor should be stored and when a patient needs blood he or she should be transfused with that stored blood, and the blood of the donor meant for the particular patient should be restored in case it does match with the group of that particular patient. Like this we can overcome shortage of blood. Luckily, three blood banks of the province have started blood exchange service and the doctors too are comfortable with this practice."

An official at Ganga Ram Hospital’s blood bank said on condition of anonymity that device method blood screening is not 100 per cent reliable.

"In this method there remains a chance that a virus in blood may go undetected. But we can reduce flaws in device method by using quality strip. Elisa System is a very advanced technology, but under this system screening takes time. Attendants of patients don’t wait. They want blood test result in a few minutes and want the same blood should be supplied to their patients. They don’t believe in blood exchange, on which the success of Elisa System depends. In all developed countries blood is restored after screening and supplied as per requirement, but in our country attendants don’t trust stored blood, and doctors discourage stored blood," the official said.

Punjab Thalassemia Prevention Programme Project Coordinator Dr Yasmeen Ehsan told TNS, "There are 60,000 thalassemia patients in Pakistan. Out of these 30,000 patients are in Punjab, which means more than one lakh bottles of blood are needed in one month for these 30,000 patients, and minimum cost for a thalassemia child is Rs300,000 per year. To cut this cost and quantity of blood, Punjab Thalassemia Prevention Programme has started extended carrier and premarital screening to locate thalassemia carriers in a family," she added.

Thalassemia is a genetic disorder, and there are more than 12 million thalassemia carriers in Pakistan. There is a dire need to educate people about the disease. Similarly, cases of hepatitis are increasing in Pakistan. Lack of awareness is the main reason for spread of hepatitis and other viral infections. Those who go to quacks for treatment of toothache are most vulnerable to infections because the instruments used for the purpose are used on many patients without sterlisation. Similarly, those who go to barbers without taking their own blades or razors run the risk of contracting infection," she added.