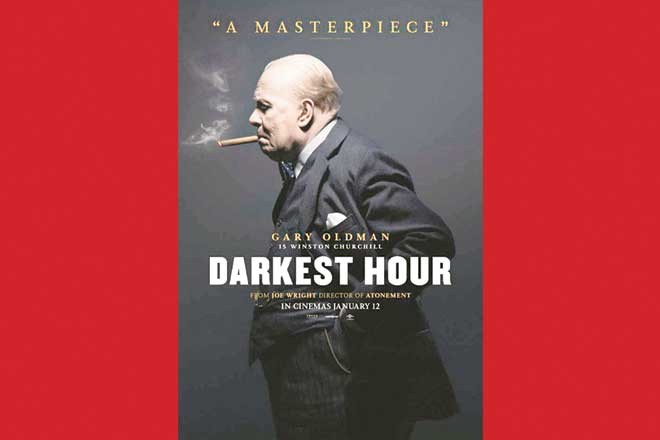 The Darkest Hour details those turbulent and critical few weeks in May and June1940 when the British Empire nearly bent the knee to Nazi Germany. With almost 400,000 British soldiers (plus the French and other Allied forces) driven to the coast of France and stranded at Dunkirk facing either certain death or imprisonment and with Prime Minister Neville Chamberlain (Ronald Pickup) and the Foreign Secretary Lord Halifax (Stephen Dillane) ready to sue for a humiliating peace all seems lost. That is until parliament forces Chamberlain to resign and Winston Churchill (Gary Oldman) is installed in his stead. The new Prime Minister now not only has to overcome his own doubts but also has to convince his nation, his king (Ben Mendelsohn), his parliament and his cabinet that there should be no appeasement of the Nazis and that they must fight on and they must never surrender, no matter what the cost.

The Darkest Hour is a serviceable war film-cum-biopic aimed squarely at winning Oscar glory and will probably pick up a host of Academy nominations. But it is only Gary Oldman who will actually earn the honour perfectly catching the performance within the performance (Churchill, from all accounts, was always playing to the gallery) while covered under tons of makeup, prosthetics and padding. He’s almost a lock to win (having already picked up the Golden Globe and a host of awards for Best Actor for his performance) and since the Academy loves makeup enhanced historical portrayals which also come with a distinctive accent or elocutionary style. Still, it is an excellent performance. Director Joe Wright, on the other hand, overplays his hand with overtly (and unnecessarily) dramatic lighting. Similarly, Anthony McCarten’s script while wisely leaving the evacuation at Dunkirk off-screen (particularly since Christopher Nolan’s terrific Dunkirk had already covered that territory earlier in the year) but also throws in an unrealistic and manipulative scene set in a British Underground train. Also, while I know that Lily James as Churchill’s secretary Elizabeth Layton is supposed to be the common person’s surrogate during these momentous historical events she seems to be superfluous to proceedings. (Of course, we also get no mention of Churchill’s known racism and bigotry which would muddy the waters too much and confuse the Academy voters). Kristin Scott Thomas, however, is quite good as Clementine, Churchill’s long-suffering but supportive wife.

Dunkirk puts on screen the miraculous evacuation of hundreds of thousands British and Allied troops from the French coast against the threat of advancing German troops in June of 1940. In under two hours, Christopher Nolan depicts in an understated but in an increasingly tense atmosphere (aided by a terrific Hans Zimmer score that ratchets up the tension) the events that unfold on land, sea and air.

The screenplay covers the three different scenarios in three different - but overlapping - time periods (land: one week; sea: one day; air: one hour) and sometimes the same scene from different perspectives. But the storytelling is so clear and so precise that there is no confusion and which leaves plenty of time to cover the vagaries of humanity - courage, fear, empathy, cowardice, leadership, kindness, forgiveness, and so on. Also, Nolan does not give in to any easy exploitation tactics - there is no glorification of war here.  It is a simple tale of survival and resilience.