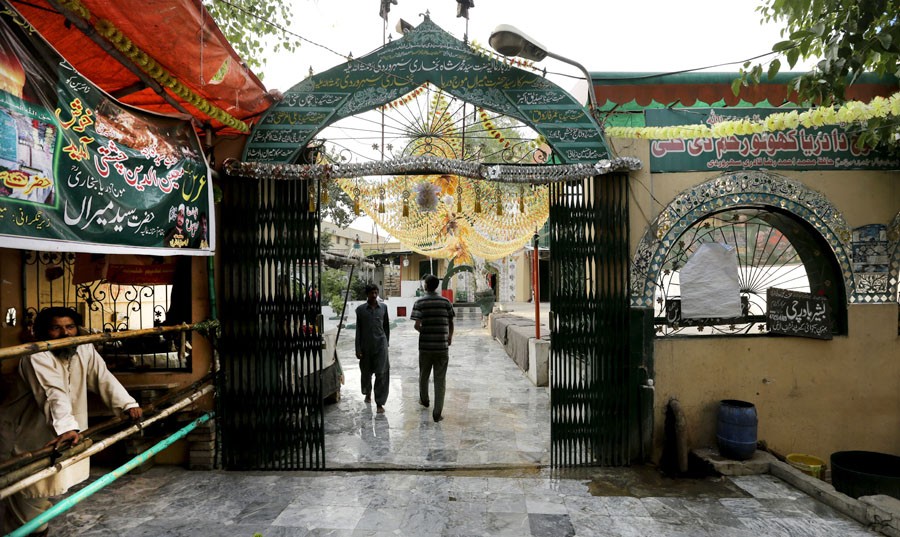 With its green dome visible above adjacent buildings around the crowded and busy roads interlacing the city in Purani Anarkali, the 16th century mazar of Meeran Shah Bukhari Mauj Darya is an integral part of Lahore’s urban and cultural landscape.

Having survived the vicissitudes of history, it stands there as a point of anchorage of the city’s variegated past and a site of Lahore’s rich and living Sufi culture. A gift from the Mughal emperor Akbar, the original estate comprised a substantial tract of land. This provided space for the celebratory rituals of the saint’s urs and for the stream of devotees seeking his intercession with the Divine; coming there simply for a meal at his langar; to pray or take a moment’s reprieve from the stress and struggle of life in its protective enclosure - for the saint’s largesse is inclusive and unconditional and all are welcome

During the British Raj, some of the open land surrounding Sufi shrines was taken over by the government for public buildings. Other sites were destroyed or damaged causing irreparable loss to the city’s heritage and cultural ethos. Today, the buildings of Lahore High Court, Supreme Court Lahore Bench, Aiwan-e-Auqaf, Auditor General’s Office and Income Tax Complex and related buildings stand on land that originally belonged to Shah Chiragh and Mauj Darya shrines. The rest has been swallowed by local shops, office buildings and densely packed low-income residential quarters that are traditionally part of the mazar landscape.

Nobody denies that changing times create new needs or that Lahore does not require an efficient and public transport system. But these needs can be met without costing the city its soul.

Lahore’s fortunes have fluctuated with those of its rulers. In 1809, Charles T. Metcalfe, here on a diplomatic mission, spoke about the city’s ‘fallen splendor’. Commenting on the 19th century creative collaboration between the British and Indian elites to modernise Lahore, W.J. Glover spoke about how it drew upon a  ‘reservoir of visual forms and modes of patronage imbued with the stabilising authority of antiquity’ to create a civic landscape that retained and nurtured the symbolically powerful presence of the shrines and older inscriptions, even as it reused them for utilitarian purposes in ways that integrated and gave new life to the spiritual, cultural and imaginative ethos of the city.

This is corroborated by Syed Mohammad Latif in 1892, who compares the earlier ‘desolation and ruin’ of the city to the luxuriant vegetation, interspersed with ‘noble edifices’, ‘gardens and plains’ intersected by ‘metalled roads lined with shady trees’, of Lahore in his time.

This raises a host of questions; chief among them being that if a colonial government, serving its own interests in an age when the debasement and denigration of indigenous cultures was part of the conquest and subjugation paradigm, could understand the importance of a historically integrated community life and be sensitive to the city’s ethos in ways that minimised damage to its social and cultural fabric, what is it that makes our elected representatives and state institutions so callously indifferent to it? What is it that makes our own national government so uncaring of it? Can immediate vested class interests and short-term political gains justify such blindness?

Lahore is a palimpsest city that bears traces of the tangible and intangible inscriptions of lives and habitations of countless generations - of monuments and enclosures used and reused by its inhabitants in accordance to their needs at different moments of historical time. Its identity - and that of the people who call it home - has been shaped by this long drawn out process of simultaneity and change.

Today, it is a city where a pre-colonial and colonial past live side-by-side with the present in an assemblage of streets and neighbourhoods that have melded the discontinuities of history to create a living culture and ethos that gives it a sense of home. As described by Sara Suleri, another Lahori, Lahore is where "streets… wind absentmindedly between centuries, forgetting and remembering beauty in pockets of respite".

More than a thousand years of history have gone into the making of this city - the presence of Loh’s stone in the 16th century Lahore Fort, itself a Unesco protected edifice, harks back to the Ramayan. Indeed, Lahore’s name which allegedly derives from Loh, son of Ram, bears witness to its age and historical richness.

All this cannot be lightly set aside in the name of modernity, development and the Orange Line Metro Train - a so-called project for the poor that has rendered large numbers of the poor homeless and taken so many of their lives.

Nobody denies that changing times create new needs or that Lahore does not require an efficient and public transport system. But these needs can be met without costing the city its soul. When the technology for long-term, cost-effective development can provide an underground network of trains, without disturbing the city’s fabric and displacing and destroying community life and livelihoods of the poorest of its residents, where is the logic for a project that threatens both?

The Lahore High Court Bench understood this, and granted a stay to all Orange Metro related construction within 200ft of concerned heritage sites till the project could be reviewed. This judgment was conditionally struck down by the Supreme Court Bench on December 8, 2017 under the proviso that protective mechanisms are set in place prior to any construction within the 200ft boundary stipulated under the National Antiquities Act 1975 and the Punjab Special Premises (Preservation) Ordinance 1985.

Following its monarchical bent and impatience for the due process of law, the Punjab government violated the Supreme Court order and started work within the prescribed limits without protective mechanisms. The mazar of Mauj Darya and the people living within its 200ft boundary are its first casualty to be followed by St. Andrew’s Church that stands almost directly across it on Nabha Road. Maharaja building, which stood adjacent to the mazar has been pulled down and its 800 residents comprising the elderly, disabled, single-women and children have lost their homes without commensurate compensation and have joined the ranks of the thousands already displaced by the project.

Their passing goes unnoticed by the city’s elite - policymakers, technocrats, politicians, hangers-on and land grabbers alike. In Pakistan’s resource rich land, the poor live close to the dust. Who is there to care when they become part of it?

In the first week of January, Lahore hosted what may well be the last urs of Meeran Mauj Darya Bukhari, thus marking the end of a centuries’ old tradition and its message of compassion:

Coming from across the land to take part in the urs, devotees were met with the news of six people injured while at prayer in the Mauj Darya mosque by a falling rafter - the result of vibrations caused by the demolition of an adjacent building - and witnessed the farce of an LDA delegation adding insult to injury by offering apologies to the saint for the havoc they had wrought. Already the mazar had taken on an unfamiliar air. The drummers were there as were the qawwals and the flower sellers, but deprived of its protective wall, overlooked by cranes and heavy machinery amidst a devastated landscape, it was no longer inviolate.

The government has promised to rebuild the mosque and top up its generosity by adding a madrassa to it. This is dangerous and unacceptable as the singularity of a sectarian vision - regardless of what school it prescribes to - will destroy the inherent eclecticism of the Sufi ethic. Even if the tomb survives, the construction and passage of the Orange train running at a distance of a few feet from its edifice, it will lose its virtue and become part of the detritus of history - like Jain Mandir that lies at only some distance from it.

These buildings will be mute witnesses to acts of deliberate vandalism; one for religion’s sake, the other in the name of development; unless Mauj Darya himself intervenes to save his mazar as he saved his city when he turned back the flood waters of the Ravi 400 years ago.

The writer is a petitioner in the Orange Line case