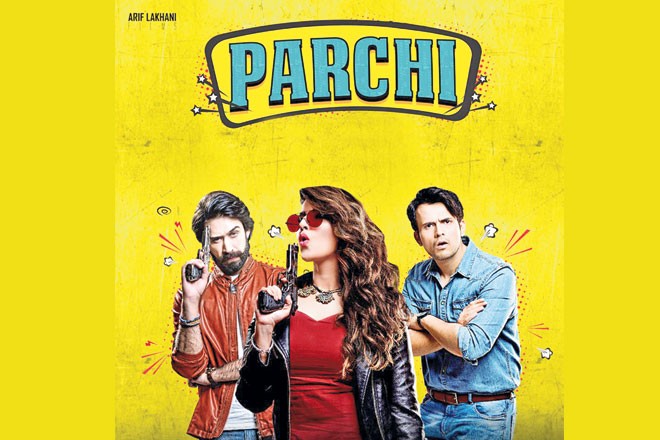 Crime comedy capers appear to have become the go-to choice for Pakistani Nu Wave cinema with every second release (or so it feels) plunging into that pool. Yet, apart from the first Na Maloom Afraad none have really hit the mark, not even the NMA sequel. The same holds true for Parchi, director Azfar Jafri’s latest film. Jafri’s two prior efforts (Janaan, Siyaah) were both watchable affairs and he has at his disposal a talented cast, including Hareem Farooq and Ali Rehman Khan, both of whom have undeniable screen presence. Given that, Parchi turns out to be a major disappointment.

The plot - which is kind of all over the place - is the typical young guys and gals getting mixed up with dangerous gangsters and shady characters while scheming to get rich quick. Zaniness and hilarity ensues (not!) This kind of thing can work but only if the script is tight and the dialogue genuinely witty. Neither is the case here with writer Shafqat Khan (also pulling double duty as Bhola, one of the hapless foursome on the run from the bad guys) and director Jafri resorting to senseless slapstick in the absence of authentic humour. Neither are any of the characters really fleshed out to the point where we may care even a little about them even though the lady gangster with a heart of gold, Eman (Hareem Farooq) had the potential to engage us.

On the plus side, it’s a good looking film and a good looking, likable cast. And there are even a couple of catchy numbers (one of which is absolutely shoe-horned in when it makes no sense plot-wise). But none of that really matters without a proper script.

Cut to chase: Another crime comedy caper that fails to deliver the goods.

Just outside the small town of Ebbings, Missouri, USA an angry mother (Frances McDormand) mourning the rape and murder of her daughter, resorts to putting up three gigantic billboards hoping to jolt the local police into action to solve the case. From that intriguing beginning, writer/director Martin McDonagh weaves a tale of loss, grief, anger, retribution, bigotry, empathy, sympathy, unexpected humour, compassion and even redemption (of sorts).  And, as in life, the plot takes you to unexpected places and you find that there are no simple answers.

Amongst the rich cast of characters we meet apart from Mildred (McDormand) are William Willoughby (Woody Harrelson), the town’s admired police chief and Dixon (Sam Rockwell), an immature police officer with anger issues. There is also Anne (Abby Cornish), Willoughby’s wife, Charlie (John Hawkes), ex-cop and Mildred’s ex-husband, and James (Peter Dinklage), the town little person who has a thing for Mildred. The whole cast is uniformly excellent.

Cut to chase: A wise, nuanced, engaging drama. Watch it.