Looking out for a subsection of Pakistan’s most vulnerable populations that doesn’t usually get much attention: animals 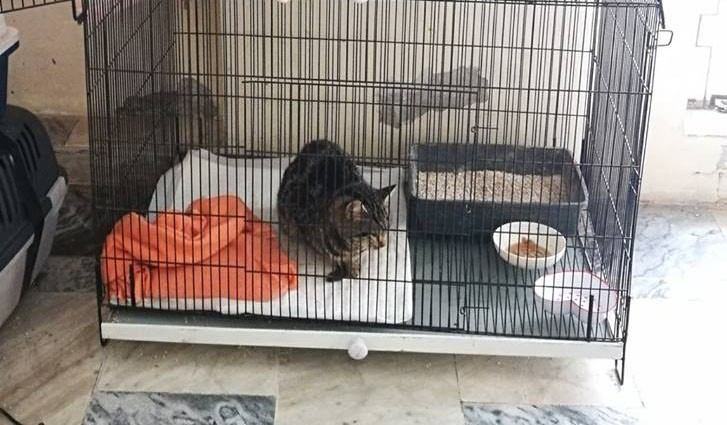 It’s a chilly January evening, and we’ve followed a pin location to a perfectly regular street in Cavalry Ground. The cab has left us before we’ve had a chance to identify which of these houses is our destination, so we loiter awkwardly outside, looking for a signboard or any indication that one of these buildings is an animal shelter -- no luck.

Tentatively approaching a couple of construction workers outside of the house opposite us, we ask about Todd’s Welfare Society (TWS). It takes a bit of explaining before one of the men finally catches on, "Woh kutton wala ghar?" (That house with the dogs?). I suspect that the statement is fairly representative of the general attitude in the community -- dismissive?

In all fairness, when we follow his direction to the house, we’re greeted by a volley of barks before we’re even near the gate. It’s just a regular house, and I’m a little surprised because their Facebook page suggests that they handle animals in not-so-regular quantities. Todd’s is one of a handful of NGOs across the country that are looking out for a subsection of Pakistan’s most vulnerable populations that doesn’t usually get much attention: animals. Founder Kiran Maheen started the organisation nearly two years ago, after an incident happened in Model Town where a dog was irresponsibly shot and had to be put down despite being rushed to the vet by friends of hers. Maheen, who had been running a Facebook page called ‘Free Earth’ dedicated to raising awareness on animal rights and environmental issues, founded Todd’s the very next day.

Many of the animals that come to them are cases of deliberate or callous cruelty: abandoned and abused. It makes their job so much harder because, it involves the added burden of expensive and delicate medical care.

"What happened in Model Town made me realise that we can talk and talk but it won’t make a difference until we step up and do something," she says. "The point of Todd’s is to have a platform where people can take action."

Rahma, who shows us around the shelter, is responsible for the society’s outreach efforts. She joined Todd’s a year ago, as a volunteer. "I used to do what little I could on my own before I came across Todd’s on Facebook," she says. "It was like a total surprise to me that there are people who actually spend time and energy looking after animals. The main problem is public attitude."

As she takes us through the premises (not a permanent animal home, just temporary headquarters while they build a suitable shelter) we come across several cats that are missing an eye or badly lamed. She also introduces us to one of the longest residing dogs at Todd’s, completely paralysed in the hind legs but frantically happy to have company and intelligent enough to block the doorway between pats and cuddles whenever he feels that he is in danger of being left alone. Rahma explains that many of the animals that come to them are cases of deliberate or callous cruelty: abandoned and abused, hit-and-runs. It makes their job so much harder because, not only does it involve the added burden of expensive and delicate medical care, but many of the animals don’t survive.

Maheen says that a lot of people ask her why she spends so much time and effort working for animals when it could go into helping the humans. Her response is: "The plight of animals and their widespread abuse in our society is something that affects all of us. Being kind to animals, or at least humane, is a basic marker of human empathy and consideration. Why should we assume that children and adults who willfully hurt and torture vulnerable and defenseless animals will be any kinder or more considerate of weaker human beings?"

She implies that there isn’t a ceiling on collective empathy, and that if four out of hundreds of NGOs in Pakistan are working for animal rights it doesn’t mean that human beings are being neglected. "The idea that all human suffering must end before we can begin to help animals is a flawed one, because it assumes that we cannot work towards both goals simultaneously."

The people at Todd’s have worked with enough abused and mistreated animals to have realised that most aggressive animals lash out because of fear, and because all they have known in the streets is violence. Through patient understanding, and careful efforts to love and care for them, even some of their most reactive rescues have become entirely benign, and love human attention.

Todd’s has many future plans, and they’re implementing them now. A great proportion of their efforts goes towards raising awareness, visiting schools, and running volunteer programmes. They believe that the greatest hope for a change in communal attitudes lies in the next generation, and the response that they have achieved from school children through their volunteer programme has been heartening.

According to Maheen, while the government has not proven cooperative yet, they hope to eventually achieve policy change and lead by demonstrating the effectiveness of their TNR (Trap-Neuter-Return programme) initiative. The programme involves capturing stray animals, vaccinating and neutering them so that they cannot reproduce, and marking them so they can be recognised as rehabilitated when they are returned to their environments.

TNR is viewed as a more humane, and more effective alternative to traditional methods of culling stray animal populations through mass shooting and poisoning.

The house in Cavalry -- the secondary shelter of Todd’s -- is well overrun with animals right now. They don’t just deal with cats and dogs but any animals that need help. They have taken on cases of mistreated donkeys and even fostered injured birds.

Todd’s is always looking for people willing to foster and adopt rescues, but they know that this is something that will only happen when there is a wider shift in attitudes towards treating animals as sentient, feeling beings. While cruelty is a problem, Maheen says, so is commodification: "People want pets that are of status conferring breeds, and they think one animal is as good as another. What Todd’s is trying to do is help create awareness that an animal is not a branded bag or a shoe, fashionably purchased and discarded at will. We lose nothing by treating them with kindness, even if we do not take them into our homes. We may gain friendlier streets and a more responsible, caring population.