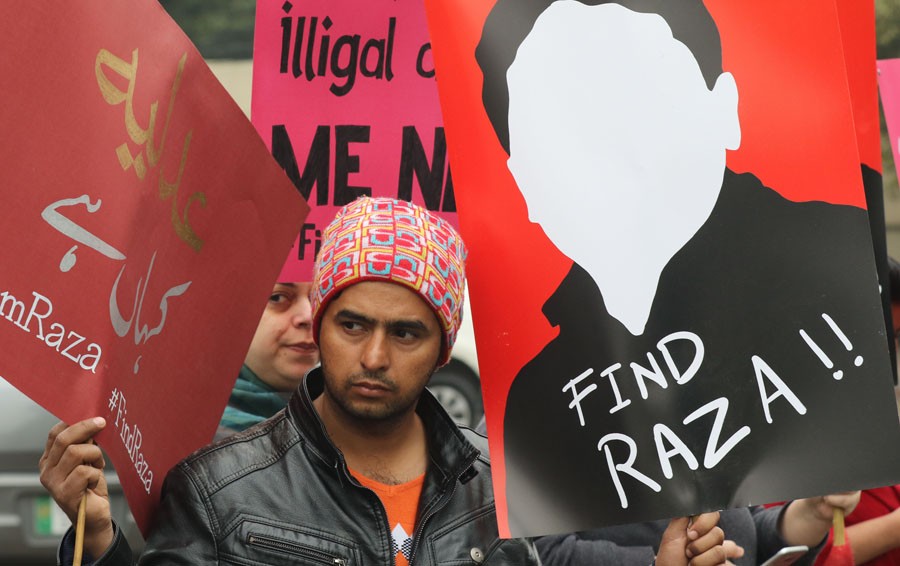 How can one comprehend the 1,532 pending cases of involuntary enforced disappearances; that too in a ‘democratic dispensation’? Even after a three-member judicial commission had given its report asking to resolve this illegal practice back in 2010? Since then, neither the Supreme Court nor the Senate Committee on Human Rights has been able to convince the state to end this policy.

The institutionalisation of enforced disappearances as a policy happened through the post 9/11 Extraordinary Rendition programme in which the publicly projected champion of human rights -- the United States -- involved other states in abductions, illegal detentions, and torture of suspects around the world. The ‘do more’ pressure on Pakistan at the time was to hunt al-Qaeda members and deliver them to the Americans.

The Pakistani state did this quite well and, by 2002, about 500 suspected al-Qaeda operatives were in Pakistani jails while others had been shipped to Guantanamo or to Bagram where, for instance, Aafia Siddiqi was solitary confined as ghost prisoner #650.

The institutionalisation of enforced disappearances as a policy happened through the post 9/11 Extraordinary Rendition programme in which the publicly projected champion of human rights -- the United States -- involved other states in abductions, illegal detentions, and torture of suspects around the world.

However, by 2005, the Human Rights Commission of Pakistan highlighted a pattern of disappearances in Balochistan and Sindh. It seems the Pakistani state, bereft of international human rights pressures, was now using enforced disappearances as a policy instrument to quell the Baloch insurgency. This impacted the larger Baloch society including students, intellectuals and writers perceived as sympathisers and thus the practice spiked in Balochistan. The same policy also made its way to Sindh but here the target seemed to be a particular strand of Sindhi nationalists and dissidents.

By 2006, the Supreme Court had taken up the case of missing persons and court proceedings led to 20 missing persons being traced. Such hope to the anguished families led cases to swell to 400. But this process was stalled during the upheaval of the Lawyer’s Movement, and was only picked up again when a judicial commission was formed in 2010. Still, the commission’s report was not made public and thus its recommendations were never implemented. Instead, it led to the formation of a Commission of Inquiry on Enforced Disappearances.

Rather than a serious re-evaluation of the policy after the formation of this commission, a more sinister approach was followed as the bodies of missing people began to appear in remote areas, particularly in Balochistan but not limited to it. Simply, little change took place even after the democratic government took charge in Islamabad.

Further, as military operations started in Khyber Pakhtunkhwa and Fata, there was also a spike in enforced disappearances there. Now these areas constitute 58 per cent of missing persons with Punjab and Sindh at 18 per cent and 16 per cent respectively.

Barring the peripheral areas, Punjab had been quiet in terms of mobilisation against enforced disappearances as the Voice for Baloch Missing Person’s 2,800 kilometre march from Quetta to Islamabad in 2014 had a depressing participation in Lahore, primarily due to tight controls on electronic and Urdu print media regarding this issue. Plus, the disappeared persons who had come back were clearly told the ‘red line’ of talking to the media or human rights organisations, the breaking of which led some to become missing persons again.

This partly changed in 2017 as the disappeared Salman Haider was well-known among activist and cultural circles of Punjab and thus much more associable. But more importantly, the case of bloggers clearly showed that the state was now ready to restrict organised alternative discourse even on social media by extra-legal means.

We now see a further restriction in critical space as activists mobilising on the missing person’s issue (Punhal Sario), peace educators (Raza Khan) and even Islamabad based journalists (Taha Siddiqui) are being targeted, while students (Sagheer Baloch) are being picked up from within the university premises in broad daylight.

This suggests that the state has hardened as it finds itself surrounded by a hostile India, Afghanistan and the US, while perceiving itself as the new frontline state in securing CPEC and thus Pakistan’s future. When it comes to its own defence, any alternative narrative and domestic criticism that challenges its policy will not be tolerated.

Haven’t we heard this before when state building was preferred over nation building -- where security of the state was upheld at the expense of the rights, security and autonomy (within laws) of its own citizens, and all in the name of defence against external enemies. While the state adopts the Machiavellian posture -- of better be feared than loved -- the autonomous civil society only sees further loss of state legitimacy.

However, the hardening of state’s objective this time around is aimed at having a subservient civil society like that of its imagined new patron, and it is in no mood to listen to its own citizens. With its security blinkers on, it never has in the past.

But can the state comprehend its own perpetuity through its constant negation of the political development of the country?