Khusro Mumtaz
In the picture
January 7, 2018 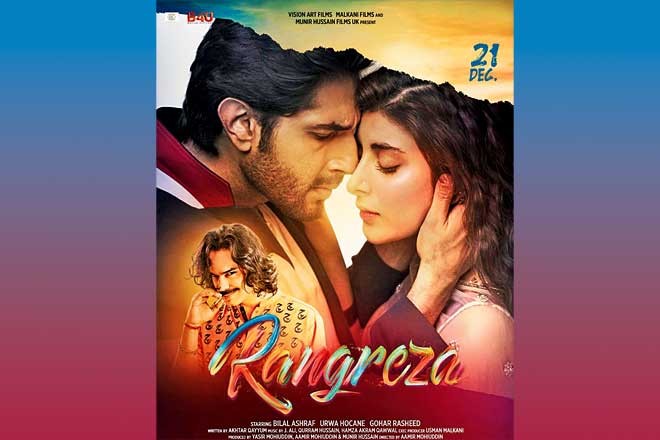 A rock star, Ali (Bilal Ashraf) falls in love with the daughter, Reshmi (Urwa Hocane) of a qawwal (Tanveer Jamal) who is betrothed to her cousin, Waseem (Gohar Rasheed). The expected complications ensue until the movie reaches its expected denouement. The prosaicness of the plot - exacerbated by sloppy editing and scripting and uneven acting (ranging from the good to the bad to the ugly) – is a pity because writer Akhtar Qayyum and director Amir Mohiuddin had a potentially absorbing drama on their hands and that potential ends up being wasted. Achi Manzil, where the qawwal family reside, has a fascinating backdrop with the two sons of the dying patriarch (Akbar Subhani, whose emaciated appearance, contrasted cleverly with fading pictures from his television hero days, strikes an appropriately melancholic – and meta - chord) and their respective families. Qayyum and Mohiuddin could have used this milieu to explore not only familial grievances and ancestral secrets but also to comment on the state of qawwali and our musical (and otherwise) heritage in present day Pakistan. Instead, by concentrating on a truly unremarkable and unoriginal romance across class divides, the movie wastes a golden opportunity to give us something truly original and

However, on the plus side, the music is very good though we really should have been given at least one good qawwali. Also, in the boorish, uneducated but talented tabla nawaz Waseem, Gohar Rasheed, manages to create a memorable, larger-than-life character without (just) tipping over into caricature. The movie (rightly or wrongly) belongs to him. Tanveer Jamal is also very good. Bilal Ashraf, on the other hand is truly weak and Imran Peerzada, playing his politician father, is possibly even worse.

Cut to chase: A potentially absorbing movie is buried beneath an underwhelming romantic plotline.

A quartet of inexperienced kidnappers led by Babu (Ahsan Khan, quite good) get in over their heads when they get embroiled in a scheme to abduct a politician’s son. This comedy crime caper certainly has its moments which elicit a few chuckles, including a neat twist concerning Babu’s girlfriend, Pari (Neelam Muneer). But, really, director/co-writer Mohsin Ali can’t claim much credit because Chupan Chupai is a remake of Tamil hit Soodhu Kavvum and most of the movie’s "novelty" comes to us thanks to the original. That said, while the movie’s first half keeps chugging along well enough, Ali loses control in the second. The film turns repetitive – despite the addition of a new character, Khan/Doctor (Rehan Sheikh) a fixer with filmmaking aspirations – the editing becomes a bit messy and the plot unnecessarily complicated without ever becoming as clever as it thinks it is. The Khan/Doctor character adds nothing to the plot, for instance.

The mostly young cast do what they can with what they are given but I wish Mohsin Ali had tightened up the script, remained less faithful to the original and riffed mightily off the nifty idea of the truth behind Pari (he had a potential goldmine there). If Chupan Chupai had been a completely original film I might - repeat, might – have awarded it an extra half star but being a remake I really can’t bring myself to be that generous.

Cut to chase: This remake of a Tamil hit flounders in its second half.