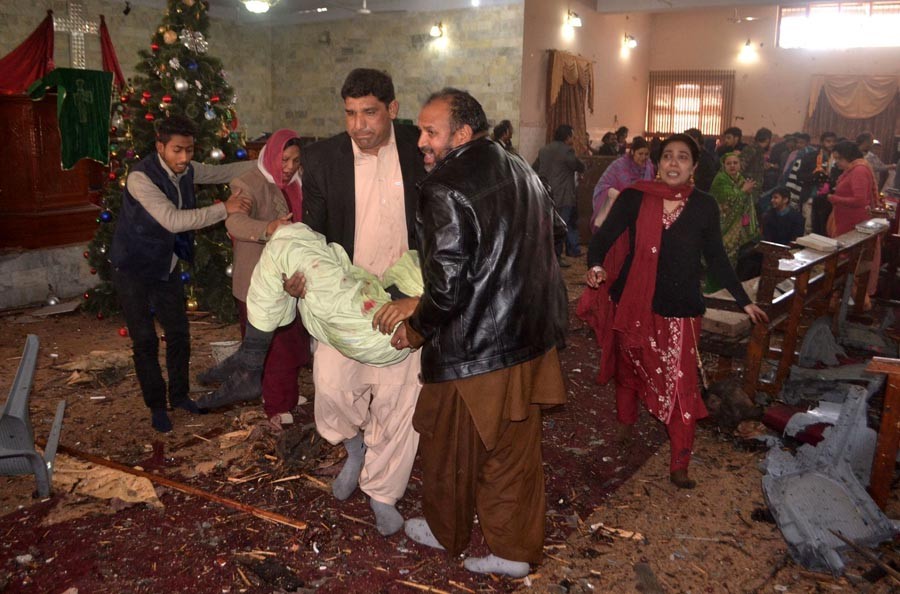 On Christmas day, the loosely-bolted, narrow gate of the Christian Colony, situated on Spini Road in Quetta, is opened only to allow an occasional car to enter or exit the colony. A white car enters the colony and stops outside the home of Nidab James. The three passengers that come out of the car look solemn -- as on this day of festivity, they are there not to celebrate Christmas but condole the death of James’s wife.

December 17 was fatal for the Christians of Quetta. Two assailants, wearing shalwar kameez and covering their faces with shawls, attacked Bethel Memorial Methodist Church, where the regular Sunday service was taking place. Situated 400 metres inside the heavily guarded zone of Quetta, this is the largest protestant church in the city. The attack that killed 10 people and injured 57, was captured by the CCTV camera and was broadcast by all tv channels.

Balochistan has historically been a minority-friendly place. Francis agrees that in the past there has hardly been an instance of victimising minorities using the blasphemy allegations, unlike Punjab.

Nidab, in his early 40s, a government employee by profession, greets his guests briefly and joins me in an adjacent room to talk about the horrors of the attack. On the day, he was supposed to visit the church like every week but got late. His relatives inside the church called to remind him to come before the end of the service. He managed to get there 10 minutes before noon, along with his wife Sunila, whom he called Sona, and two children aged five and nine.

Two of Nidab’s children were among the 44 others who were participating in a children’s programme organised by the church. Both were dressed in white. "At around 12.05pm I heard the first shot. I thought of my children and tried to get out of the church building but the door was closed," he tells The News on Sunday.

Suddenly the lights went off. "It was loadshedding, and the small generator could barely light up the dark room. My wife and I sat on other side of alter of the church, thinking that was the only place where we could be safe in case of a bomb blast," he adds.

Then came the blast. "I saw my wife flying three metres away from me."

Sunila died while she was being carried to the hospital in an ambulance. "Doctors told me she died of lung collapse caused by shrapnel," he says in an emotionally charged voice.

Two fragments of a bomb hit Nidab, one in his chest and the other in his leg.

After three days of hospitalisation, he requested to be discharged so he could attend his wife’s funeral. "I have bought new clothes and toys for my children but there is nothing to celebrate this Christmas. I have lost everything," he adds.

Arif Bhatti, Nidab’s father-in-law, says the lady in charge of the children’s programme had wisely instructed the children to hide below the chairs in a separate room. "A terrorist looked into the room but could not find the children. If they had found the 44 children present there then God forbid it would have been another APS."

A little away from Nidab’s house, in another narrow street of the Christian Colony, lives 23-year-old Faraz Fazal. He is a teacher in a private school and lives in a two-room house. Faraz would attend the Sunday service regularly at the Bethel Memorial Methodist Church, along with his father Fazal Masih, a welder by profession.

On December 17, he went to the church with his father but came back alone. "When the firing started, I took refuge in one of the two small rooms inside the main church building. When the attack was over and people started to leave the building, I learnt my father had been shot by the attackers."

Besides his father, Faraz lost his friend Akash and six friends sustained injuries in the attack.

"It’s Christmas today. We are mourning deaths rather than celebrating," he laments.

Ambrose John Francis, who served as a member of the Balochistan Assembly between 2002 and 2007, lives in the same neighbourhood. "Around 50,000 Christians live in Balochistan, a majority of them in Quetta. We too are Pakistani, it’s the duty of the state to protect us."

Balochistan has historically been a minority-friendly place. Francis agrees that in the past there has hardly been an instance of victimising minorities using the blasphemy allegations, unlike Punjab. "This is the first time in the history of Balochistan that Christians have been attacked in this province and I hope that it’s the last time."