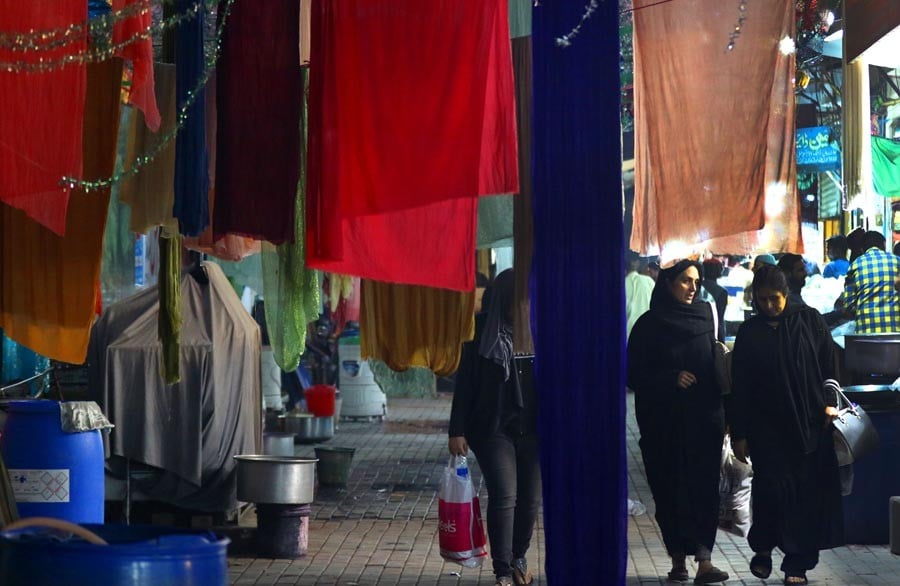 A rapidly growing city, as Lahore attains modern, ‘western’ amenities like malls, and mobile-app cab services, the new remains in contest with the old. This began as a project for class, where a friend and I set out to explore the bazaars of Lahore and see just how the old and new interact.

Most of our shopping happens in retail outlets and malls -- ‘ready to wear’ is just so much more convenient. But every now and then one needs loose fabric, and Liberty market has always been our standby for that. That’s where we decided to go, only this time with our eyes open.

Liberty has always seemed to me an all-access sort of place. The main road is invariably crowded with cars, taxis, rickshaws, motorbikes, and coaches. But the market itself is generally friendlier because it is entirely pedestrian.

I always feel a little more secure in a rickshaw -- something to do with the illusion of being able to jump out just-in-case -- but it’s the middle of the day, and there are two of us, so we opt for the more comfortable Careem. One of the best things about shopping at Liberty is that there aren’t any attendants to tell you that you can’t eat inside. So, just before we go in, I buy twenty rupees worth of corn: warm, salty, sand-baked kernels that I carry around in the brown paper bag to nibble on as the day progresses.

We pass the always-empty franchise shops in the beginning of the street (I mean, who comes to Liberty for Maria B?) and plunge into the flood of people swarming the main market. It’s mostly women: some seem to be there with husbands, some with children, some alone, and many in groups weaving in and out of the narrow lanes.

Liberty has always seemed to me an all-access sort of place. The main road is invariably crowded with cars, taxis, rickshaws, motorbikes, and coaches. But the market itself is generally friendlier because it is entirely pedestrian. The central street is wide and peppered with food vendors in between shops selling chaat, pakoras, chips -- street food of all descriptions.

My friend and I have decided that we want to explore the shops in the back where the ‘formal’ clothes are. Liberty is the one-stop destination for wedding shoppers who can’t afford to (or don’t want to) drop their life savings on designer joras (vernacular for ‘outfits’). The knockoffs available here have all the dazzling splendour of the originals, and besides being customisable, don’t cost an arm and a leg.

The inner shops are situated in an intricate labyrinth of alleyways, wound around each other in narrow square formations, selling loose fabric near the outside, and embroidered dresses inside.

All of the sellers are men, and as we pass by, they call our attention to their various products, quoting prices and bargains. But it is fairly obvious that my friend and I are out of place here -- too young, too inexperienced, too unlikely to make a substantial purchase for them to waste much time on us.

I notice a friendly camaraderie between the men behind the counter and the women buying fabric. They are both haggling for the best deal they can get, and I realise that the marketplace (bazaar) is one of the few places I’ve seen where women can get just as loud and assertive as their male counterparts. It’s a game of experience, though, and as the two of us slink by the shops hoping no one will insist on selling us something, it occurs to me that the crisply professional, non-negotiable transactions I am accustomed to making in stores like Khaadi and Sapphire have left me ill equipped to shop here. For Liberty, I need my mother.

I can tell by the inflection of their voices as they yell to each other across the stalls that most of these men are Pathan. That’s usually good for a discount in Lahore even now, although I have realised that the younger ones -- the ones who have grown up in the city -- are less likely to be amicable just because we speak the same language.

My friend is snapping pictures of the little glass encased shops with their diamonte studded stools, and jewel encrusted mannequins. The camera doesn’t seem to be making anyone uncomfortable, but I am still slightly taken aback when a man at a jewellery stall waves towards his friend and tells my friend, "Iss ki photo kheencho!" (Take his picture). The gentleman in question doesn’t seem in the least embarrassed. He looks up and grins quite happily at the camera, and the first man asks us when the picture will come on tv.

So this is the aftermath of the ‘chai-wala’ phenomenon. We all laugh as my friend shows them the picture, and tells them that we are not doing this for a tv show.

We have ducked in and out of a number of shops by now, and been snubbed any number of times when we’ve made it clear that we are ‘only looking.’ But the next shop is a treasure trove of embroidered fabric: thaans and thaans of it stacked up against the walls in every imaginable colour.

There is only one man in the shop -- the others this size had two or more, rolling fabric, unfurling it, cutting, folding, running a brisk trade. He is sitting on the floor in a biscuit coloured shalwar kameez, sipping tea. He gets up slowly as we walk in, and let’s us browse without saying anything after his initial greeting. I am almost certain he’s Pathan, but I ask anyway -- it’ll make it so much easier for me to have a conversation. He replies in the affirmative, seeming genuinely delighted that I am too.

We both naturally switch to Pashto and I tell him what we are doing here, and that we both study in Lahore. He tells me that he gets more than enough customers, but that the material he has is different from the shops around.

Rooting out a roll of fabric from the pile just by his feet, he unwinds a length of it to show me the pattern. "We have these specially made," he tells me, "from designs we find on the computer. We sell them much cheaper here. It’s illegal but what the designers don’t know won’t hurt them… or us." There is an undertone of satisfied amusement in his voice that is difficult to convey in translation.

He offers us tea, which we refuse because it’s getting late and we’d prefer not to take a Careem post-maghrib. But after we have discussed the merits of speaking our own language, and of the various fabric designs he’s "adapted," I promise to come back.

There is a part of me that feels I should be principally opposed to this form of intellectual property theft, but when I compare the friendly chat I’ve just had with the stilted, pretentious atmosphere of your standard boutique, I feel inclined to sympathise with this man who is just trying to maintain his trade. After all, when the new has the advantage of technology, doesn’t it make sense that the old grows innovative?