Much ado and a din about dinner

In an increasingly polarised political atmosphere, a dinner discussion about India-Pakistan relations becomes grounds for accusations of treason 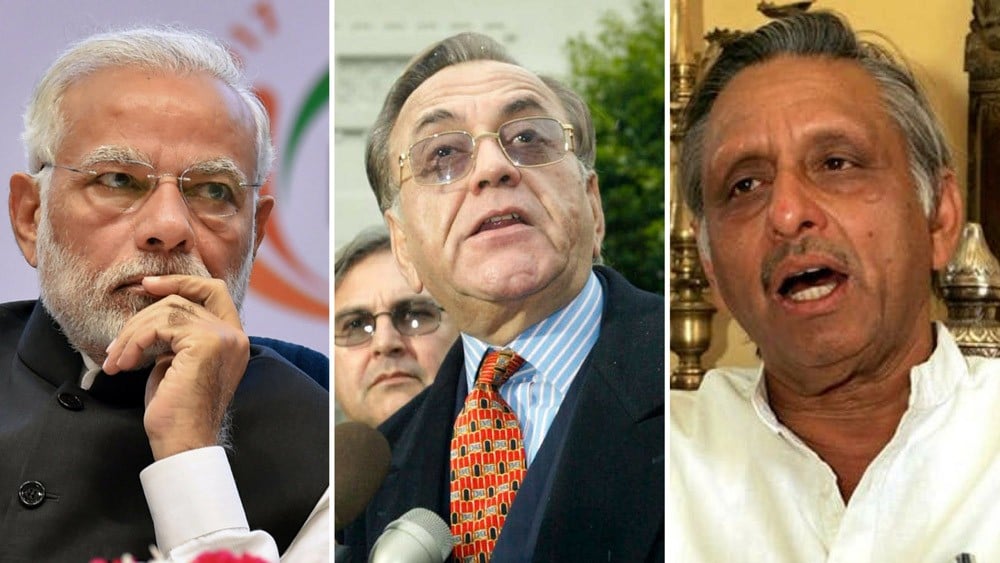 Accusations of treason, conspiracy and subversion against the host and guests of a private dinner party in Delhi speak volumes for the suspicions and tensions that mar India-Pakistan relations at the official level. They also speak for the deterioration in political maturity in India visible elsewhere too.

In Pakistan, peace activists get threatened or picked up by "unknown persons" for their beliefs (#FindRaza). In India, even retired prime ministers, ambassadors and army chiefs become targets of name-calling and accusations of treason and anti-nationalism.

All this is part of the new normal, standardised into the dominant discourse by ratings-hungry and sensationalism-seeking media. Armies of social media trolls keep the accusations in circulation and vitiate the atmosphere further.

The next day, Aiyar found himself in a soup for using strong language against Prime Minister Modi.

As a non-native Hindi speaker, Aiyar’s gaffe may well have been overlooked had it not been for the politics of the moment. His angry political opponents jumped at the chance to accuse Aiyar of "sleeping with the enemy".

Calling someone a ‘traitor’ is by no means a new tactic in the region as Pakistanis know all too well. Aiyar’s own party abandoned him, forcing him to issue an apology. Some opponents even said he should have sought government permission, leading Aiyar to ask: "Are we becoming a police state?"

In his lengthy, acerbic rejoinder to the accusations, Aiyar makes the categorical statement that he doesn’t consider Muslims or Pakistanis as his enemies. It is sad that the current climate compels such affirmations that shouldn’t be necessary.

The baseless accusations of treason and conspiracy against Aiyar are particularly disturbing given his distinguished guest list - a former Prime Minister of India, a former Vice President, a former Chief of Army Staff, a former Foreign Minister, a former Foreign Secretary, plus several of India’s top diplomats and political and national security commentators.

Many have publicly expressed outrage at the accusations. Former Prime Minister Manmohan Singh has issued a statement asking Modi to apologise for alleging that Singh was conspiring with Pakistan for the Bharatiya Janata Party’s (BJP) defeat in the then upcoming Gujarat polls.

The Gujarat polls were not even mentioned at the dinner. The focus, former Army chief Deepak Kapoor has asserted, was "nothing more than India-Pakistan relations".

"The bond that united everyone in the room," writes journalist Prem Shankar Jha, "was a firm belief that neither India nor Pakistan could ever achieve their full potential without burying the hatchet".

Jha was among two former editors at Aiyar’s dinner. The other was Rahul Singh. Aiyar has known both since their school days. Rahul Singh’s distinguished late father Khushwant Singh was an unabashed friend of Pakistan.

Known for his consistent call for an "uninterruptible and uninterrupted dialogue" between India and Pakistan, Aiyar’s acerbic rejoinder to the accusations against him makes for fascinating reading as he details his relationship with each of his guests.

His friendship with Kasuri goes back to their college days at Cambridge. They reconnected after Atal Behari Vajpayee, founder-President of the BJP and then Janata Party Foreign Minister of India, appointed Aiyar as India’s first-ever Consul-General in Karachi (1978-82).

M. Hamid Ansari, former Vice-President of India and Rajya Sabha Chairman, was Indian Ambassador in Abu Dhabi when Aiyar stayed with him before flying to Pakistan in December 1978. He was at Aiyar’s dinner too.

The morning after Aiyar landed in Islamabad, Indian Ambassador Katyayani Shankar Bajpai was speaking with Kasuri on the phone and passed it on to Aiyar. Kasuri insisted that Aiyar visit him in Lahore before going to Karachi. The Lahore-born Aiyar agreed - if Kasuri would drive him straight from the airport to his childhood home at 44 Lakshmi Mansions on the Mall.

Bajpai, nearly 90-years-old now, was also at the dinner. He "was no soft-heart like me", says Aiyar. "He has always had a hard, tough understanding of Pakistan, untouched by any of the starry-eyed romanticism that tinges my view of that country. He was at the time in almost daily touch with Barrister Khurshid Kasuri, monitoring developments in the then ongoing Lahore High Court trial of Zulfikar Ali Bhutto".

Kasuri drove Aiyar to Lakshmi Mansions as promised. A medical doctor was living in Aiyar’s old apartment. Dr Malik had been a student in London while Kasuri and Aiyar were at Cambridge. Aiyar has since been several times to Lakshmi Mansions with his wife and children.

When he visited Pakistan as India’s Petroleum Minister to initiate talks on the Iran-Pakistan-India gas pipeline, the Lakshmi Mansions’ Residents Welfare Association, including writer Saadat Hasan Manto’s family, organised a welcome reception. "Dr Malik asked me to send him a blow-up of my parents’ photograph so that he could, in respectful tribute to their memory, hang it on the walls of their first marital home. Is this the enemy?"

Also at the dinner was former Ambassador Satinder Lambah who negotiated for the Musharraf-Kasuri Kashmir deal with Pakistan’s representative, bureaucrat Tariq Aziz. The agreement entailed no exchange of territory or people but an attempt to "render the LoC irrelevant" to the lives of Kashmiris on either side of the Line. A most treasonous thought for the establishments on both sides.

Former Foreign Minister Yashwant Sinha couldn’t make it due to being detained by the Maharashtra police. Sinha had accompanied Vajpayee on their January 2004 visit to Islamabad to kick off the Musharraf-Manmohan dialogue.

Natwar Singh, Foreign Minister at the start of the back-channel talks and Aiyar’s boss in Islamabad for most of Aiyar’s term in Pakistan, was there. Aiyar quotes Singh’s "immortal comment" to the Pakistan media on the Moradabad riots outside the Eidgah on the holy day of Eid, 1981: "I feel humiliated as an Indian and diminished as a human being".

Former Foreign Minister, Salman Khurshid, got the dinner date mixed up and "turned up only the next day". Present was "the other Salman", former Foreign Secretary Salman Haider, architect of the 1997 "Composite Dialogue" between India and Pakistan. It has persisted over two decades, "its name but not its essence changed".

Former Indian High Commissioners to Pakistan Sharat Sabharwal and T.C.A. Raghavan, author of the recently published The People Next Door: The Curious History, were also present. So were Chinmaya Gharekhan who headed the Indian foreign ministry’s Pakistan division when Aiyar was in Karachi, and M.K. Bhadrakumar, former Deputy High Commissioner to Pakistan.

Gharekhan, a Gujrati like Prime Minister Modi, has served as principal foreign policy adviser to two Prime Ministers, Indira Gandhi and Rajiv Gandhi, and was India’s longest-ever serving Permanent Representative to the UN. He bluntly told Kasuri that "so long as Pakistan insisted on filching back Kashmir from us, there was nothing to talk about to Pakistan", writes Aiyar. Proof of patriotism.

From all accounts, this was a social gathering of an old boys’ network linked through the Musharraf-Kasuri-Vajpayee Kashmir deal. No mentions of any women except Aiyar’s wife who served up nihari and biryani that Aiyar claims was "quite as good as in Pakistan!"

That’s not a claim I’ll believe without proof, but what is clear is that there is nothing treasonous about Aiyar and his band of Indo-Pak "has-beens" (who are anything but).

Much ado and a din about dinner