A prisoner of conscience 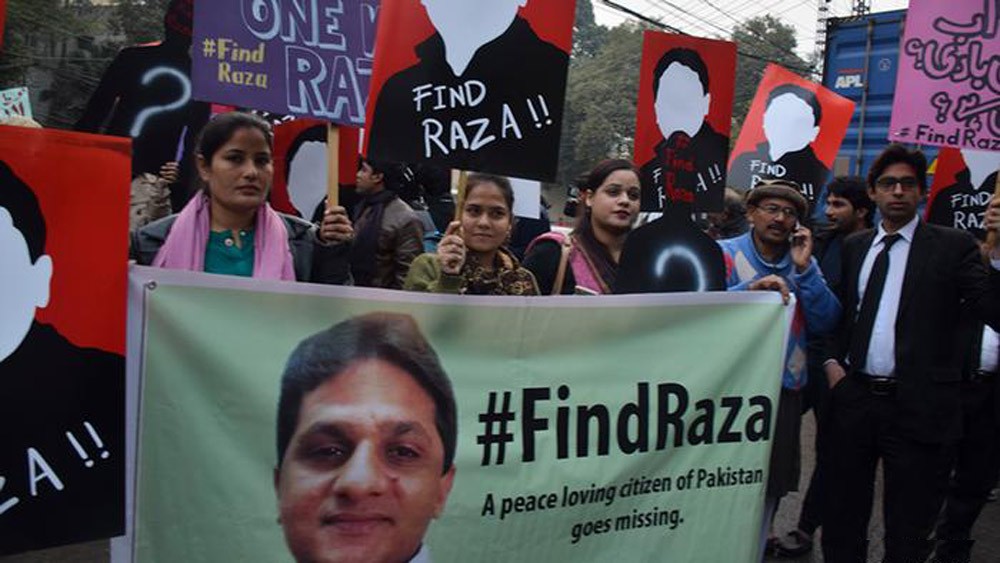 A number of articles have already been written profiling Raza Mehmood Khan but I still take this opportunity as a close friend and colleague to share how and why he represents the conscience of a nation mired in ignorance, materialism and martial hegemony.

I first met Raza during the lawyer’s movement almost 10 years ago when he was a youth leader with the Pakistan Tehreek-e-Insaf. During the PTI membership drive for which he took leave from his job at a pharmacy, he and his team of volunteers registered the highest number of members in Lahore, so high that he had to justify the veracity of his claim to the leadership. Soon after, he was approached by a PTI leader who counseled him on his insecure and low-income future with an offer of work. This, he politely declined as his work was ideological, and for the party rather than an individual, eventually leading to a parting of ways.

Raza’s visit to India for a youth peace festival, and subsequently his year-long work on the Pakistan India Relaxed Visa Campaign which gathered a 100,000 signature made him a believer that Pakistan’s destiny was linked to the sub-continent.

His next foray was with the Institute for Peace & Secular Studies (IPSS), initially a volunteer initiative where youth gathered around the issues of extremism and terrorism. Post Salmaan Taseer’s murder, this group protested every week at Liberty to break the silence against the shockingly terrifying response of the general public. Interestingly, Raza was also among those beaten up at the Taseer vigil in 2015 at the behest of Khadim Rizvi. The vigil attackers were jailed but Rizvi went scot free. It was thus understandable that he would react with accusations when the state gave in to Rizvi’s threats during the Faizabad dharna.

However, two other experiences had an enormous influence on Raza’s worldview. His visit to India for a youth peace festival, and subsequently his year-long work on the Pakistan India Relaxed Visa Campaign which gathered a 100,000 signature made him a believer that Pakistan’s destiny was linked to the sub-continent, and only a strategic shift to look eastward could resolve our identity crisis which lay at the root of Punjab’s extremism.

As the NGO project came to an end, Raza went back to the semi-skilled job market selling cloth for a while before getting an opportunity to do field surveys of informal workers including domestic workers, street vendors, daily wage workers, enterprise workers, and rickshaw drivers. Additionally, we worked together to counter extremist messaging by putting peace messages behind rickshaws, which later expanded into a failed initiative to form a rickshaw union based on the ground research in understanding issues of rickshaw drivers. Still, it helped raise awareness among rickshaw drivers and pushed existing unions towards an issue based approach.

The peace messaging took on a new shape post Peshawar massacre when for the first time we were allowed to set up a stall in Race Course Park, where we engaged children and elders to express themselves against terrorism, violence and hate. Out of this experience, evolved the Awami Art Collective as a number of artists, academics and activists came together to rethink their respective public engagement methodologies. Artists wanting to break out of the limiting gallery space while the activists were tired of the same old small protests.

The Collective initiated a new trend by generating public discourse through public art, and its two exhibitions, one on ideological violence in Bagh-e-Jinnah in collaboration with the City District Government Lahore and the other on banning of Basant in Taxali Gate showed the power of art for activism. Raza’s role was crucial because he led the community engagement effort, making the work a collaboration with the community. The relationships he built over the course of the exhibition were taken forward to try to bring together the decimated music community of Taxali which has at least 200 households of musicians and musical instrument makers.

With ebb and flow, this initiative is still ongoing as for him, a cultural renaissance is a necessity to take on the forces of hate and tyranny. His community work does not end here. It was none other than Raza who helped mobilize the RastaBadlo initiative against the Orange Metro. He shifted his existing commitments, and spent the next few days and nights putting up posters along with his rickshaw driver friends. He also collected data from businesses along the route to calculate the ongoing business loss, and brought together the Multan Road furniture market president with lowly hawkers on Nicolson Road for a press conference on the issue.

But, what lighted his eyes was Aghaz-e-Dosti (AeD), a volunteer-based peace initiative among Pakistani and Indian youth, which rethought people to people engagement, bypassing the strict visa regime by bringing together children through letter exchange, class room connect and a yearly peace calendar, which was launched in multiple cities in Pakistan and India. Raza had brought new energy since becoming the AeD convener in Pakistan, and was gradually increasing the number of schools participating on Pakistani side. He had also recently registered an organisation ‘Hum Sab Aik Hain’ to scale up these efforts. Inviting Indians to Pakistan required a legally registered body.

Lastly, friends had recently initiated a space named Low-key Lokai, meaning people and community in Punjabi. But, it was termed "low-key" primarily because we wanted to develop a progressive community in a medium to long term horizon. We had bypassed sustainability issues through a model of a shared space among multiple collectives, who could use it as an office as well as a public engagement space. Raza was the one person management of Low-key Lokai responsible for administrative, scheduling to collecting monthly membership dues to run it. At times, he would be short of personal expenses because a chunk would have gone towards Low-key Lokai expenses while he waited for membership dues. In a short period of six months, about 15 events had already taken place here ranging from a variety of issues from gender, class inequality, grassroots political participation, urban forests to the discussion on Faizabad dharna, the day he was illegally abducted by the state against its own laws.

Why would the state do this? Why would it target a progressive idealist who not just represents peace and justice, but also acts it? His brother stated recently that Raza never meant any harm, did no harm but yes, he spoke his conscience, and he spoke the truth. Targeting such a peace educator and a progressive activist suggests that the Pakistani state is quite clear about nipping citizen initiatives in the bud which could potentially challenge the constructed ideology of Pakistan and its ideological guardians.

A prisoner of conscience