The day I cried 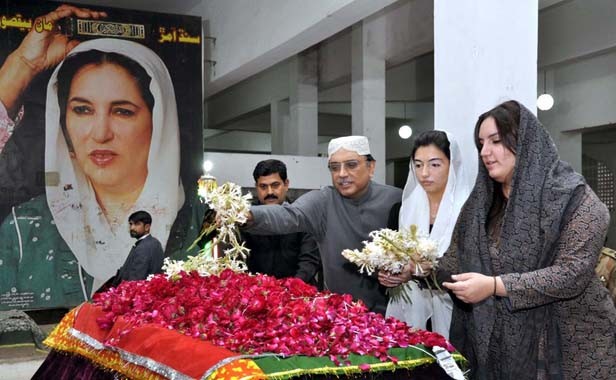 The history of subcontinent would have been different had Dara Shikoh ascended the throne of the Mughal Empire instead of his brother Aurangzeb; and Benazir Bhutto married a Sindhi bureaucrat instead of Asif Ali Zardari.

As the story goes, during the worst days of Zia’s dictatorship, all was set for Benazir’s engagement with a young handsome Civil Superior Service (CSS) officer in customs group.

The young but meek Sindhi bureaucrat sent a D.O. letter to the president, General Zia, to officially seek his permission to be engaged and married with Benazir Bhutto. Zia shared the letter in a cabinet meeting with his close aides, including Illahi Bux Soomro, a one time friend to Bhutto family.

She was a target of harassment in crowds by her own jiaylas. Her friend and private secretary, Naheed Khan, shielded her and withstood attacks directed against her.

Soomro somehow managed to get a copy of the letter and showed it to Begum Nusrat Bhutto. This made the Begum so upset that she withdrew from the negotiations for the engagement going on between the two families. Her view was that if the boy had shown such cowardice, did he deserve to be the husband of Benazir Bhutto in the face of the military dictatorship?

Benazir Bhutto -- whom I had called "another Aurangzeb" in one of my write-ups in the context of her quest for acquiring power in her party and the house of Bhuttos (throwing her mother out of the chairpersonship of the PPP and shunning her brother who was later killed ostensibly by the police not far from his home during her second term as prime minister) -- wore many hats. And yet she is now rightly recognised as the Queen Martyr (Shaheed Rani) by the masses, at least in Sindh.

But the Benazir I saw later constantly and fearlessly fought against a uniformed tyrant to liberate her people. She was herself a victim of misogyny, sexism, even sexual harassment and male chauvinism, her brother was preferred over her as "pugdaar puttra of Bhutto" (the son, heir to the turban of Bhutto) in politics by no one else but her own mother.

She was a target of harassment in crowds by her own jiaylas. Her friend and private secretary, Naheed Khan, shielded her and withstood attacks directed against her.

"We can not brave the state’s wrath as she can," one of her estranged uncles whom she had ousted from her party once said. This was the time when she would lead a procession of supporters in her jeep from 70 Clifton to Lyari, her party’s stronghold in Karachi in their pitched battle against the police and other security forces, amidst flying bullets and teargas shells.

Benazir succeeded in reaching Lyari on August 14, 1986, in the second round of MRD movement against Zia. Earlier, wearing a burqa she got on the Khyber Mail Express train but was arrested in Faisalabad on way to Lahore to lead an anti-Zia rally.

"Maidan mein Milayn gay" (we will meet in the field again) were her last words before she went into exile in London in 1981. She staged a comeback in Lahore on April 9, 1986.

Sworn in as the first woman prime minister of Pakistan and the Muslim world on December 2, 1988, she was booted out through a presidential decree on charges of corruption and mismanagement on August 6, 1990.

She blamed her overthrow as a result of the conspiracy by the Inter Services Intelligence (ISI) and Military Intelligence (MI). She once asked a senior journalist known for his ‘intelligence-inspired stories’ to leave the room before she began her press conference because she believed the journalist had been writing stories planted by the intelligence agencies against her government.

What we didn’t know was that from December 2, 1988 to August 1990, a gardener who worked on the lawns of the Bilawal House was in fact a colonel of a powerful spy agency.

Benazir is said to have helped in the creation of the Taliban which writer and scholar, Tariq Ali, terms as her unforgivable crime against humanity.

She is also said to have acquired the nuclear missile technology from North Korea for Pakistan but was still treated as a ‘security risk’, ‘a traitor’, and ‘lady prime minister’ whom the army chief of the time would come to see without wearing a cap, which meant he didn’t have to salute her, it is said.

Why was she going back while her life was clearly in danger was a question everyone asked in 2007. "People get killed by being overrun by yellow cabs in New York. I am going to my motherland. My country. My Sindh, to my people. My land where my grandfather, father, and brothers are buried. Death and life is at the hands of God" was her reply.

I owe her gratitude because she ordered the Sindh administration to provide me security after my story on death squads in Karachi was published in the Newsline and I was facing death threats.

However, later on the Karachi police raided the apartment of Razia Bhatti, editor Newsline, for publishing an article written by friend, Mohammed Hanif, about the ‘summersaults’ of her governor Kamal Azfar in Sindh.

I asked her during her last press conference in New York before she left for Dubai to return from her exile to Pakistan in August 2007 if she would apologise for the abuses committed during her last government, including the midnight police raid at Razia Bhatti’s home and extra-judicial killings of  members of her opposition party (MQM) in Karachi?. "No" was her loud and adamant answer.

I cried the day she was killed. The Benazir Bhutto of my imagination was different from the Benazir I loved to criticise. While discussing Sindh and Sindhis with the ambassador of a tiny country with a population of 200,000 last week, I was asked, "Is there any high profile leader of Sindhis?" I paused for a while and then replied, "I don’t find any high profile leader among the Sindhis after Benazir Bhutto". "Was Benazir a Sindhi?" was the ambassador’s counter question.

Not only among Sindhis but in the whole country, as far as the Indus goes, we have lost a towering leader.

The day I cried