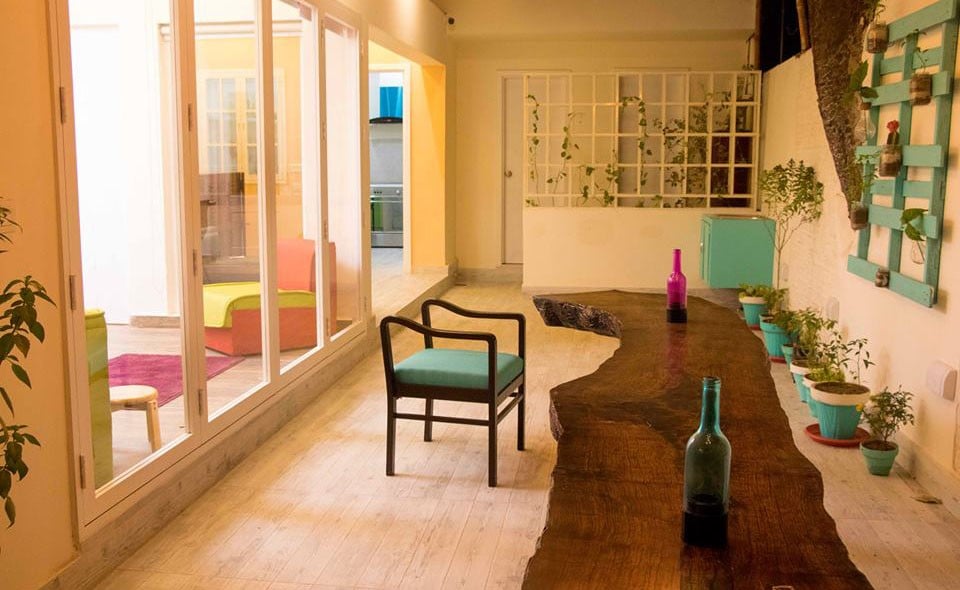 On Main Boulevard, Gulberg, somewhere between a row of bank buildings and Siddique Trade Centre, there is a bright white wooden sign in bold pink, stylised font that says ‘THP.’

It’s an unusual location for an establishment called ‘The Happieee Place.’ But perhaps, it is fitting after all that a self-described creative haven for busy city dwellers is right there in the middle of the city itself.

At three weeks old, THP is a newborn venture, the first initiative of the Saeed Research Studio founder Ayesha Saeed. A small team manages the place, and Saeed herself seems very hands-on. According ot Quratulain Shams, who was part of the launch team and hopes to join full-time, the design and layout are entirely Saeed’s handiwork.

Although the projects Saeed wishes to develop in the future are manifold, perhaps the most important function of THP is the one it started out with: to provide space for an unfolding community of artists and creative people.

The large garden comes as a welcome surprise among the multi-storey office blocs of the surrounding area. It’s a simple open space, lined with trees, with a rope swing in a corner, and a small canteen to one side. This is where all the outdoor events take place.

At the time I visited the place, it was occupied by a group of people running around between chalk circles yelling to each other. It turned out to be the ‘Mindfulness in Theatre’ workshop, led by Chota Mota Theatre.

Saeed emerged from the kitchen, and explained that THP "wants to be more than just a space provider, and actively involves itself in the events it hosts."

As she showed me around the place -- the book binding room, the gallery, the kitchen, her own office, all bravely painted white in defiance of Lahore’s inescapable dust -- she explained that THP was really a "selfish" venture. By creating an apolitical, creative, community space like this, she said she was only responding to her own need for such a place in Lahore.

When asked why all of the additional "eee’s", she laughed and said that she had a personal problem with the "y’s".

The bindery, where THP’s book binding workshops take place, and also where they host their movie nights, is a carefully worked out space with the right tools and equipment hung on the walls. There is a small corner for children also. Besides, there are two doors leading out of it -- one to Saeed’s office, and the second to the gallery which is currently hosting an exhibit of Saeed’s own photography.

The Happieee Place seems to operate on the principle of working with what they have, and welcome people who are trying to do the same, carving out some time between work and family obligations to indulge their creative sides.

It’s an environment designed to be especially friendly to women. Saeed said she encouraged people to bring their children with them, "It gives us a break from thinking about running the place, and their parents a chance to work on something of their own."

At the moment, THP is open on certain hours on weekdays, for people who just want a space to work. Weekends are generally devoted to events. There’s a movie screening every Friday. In these few short weeks, they have already hosted a theatre group, a bird training workshop, creative study classes, and book binding workshops. In the next few days, they are going to start a two-week cooking workshop also, with Chef Waqas (of Soul Kitchen).

Once Saeed’s own show comes down, she hopes to display the creative work of other local artists, or even launch a residency programme where artists can set up their studios temporarily at THP and showcase their projects as they develop.

The Happieee Place clearly has many developments in its future, and many areas intended to expand to. Although the projects Saeed wishes to develop in the future are manifold, perhaps the most important function of THP is the one it started out with: to provide space for an unfolding community of artists and creative people.

As Sara Zahid of Chota Mota Theatre said, at the close of the workshop, "One of the most challenging aspects of doing creative work in Lahore is to convince people that there’s a need for it. By providing an additional space for groups such as CMT, The Happieee Place is not only becoming a centre for a creative community but also helping to foster its growth."