The politics of blasphemy

Imran Khan should remember that financial corruption is not the only kind. There is also such a thing as moral corruption 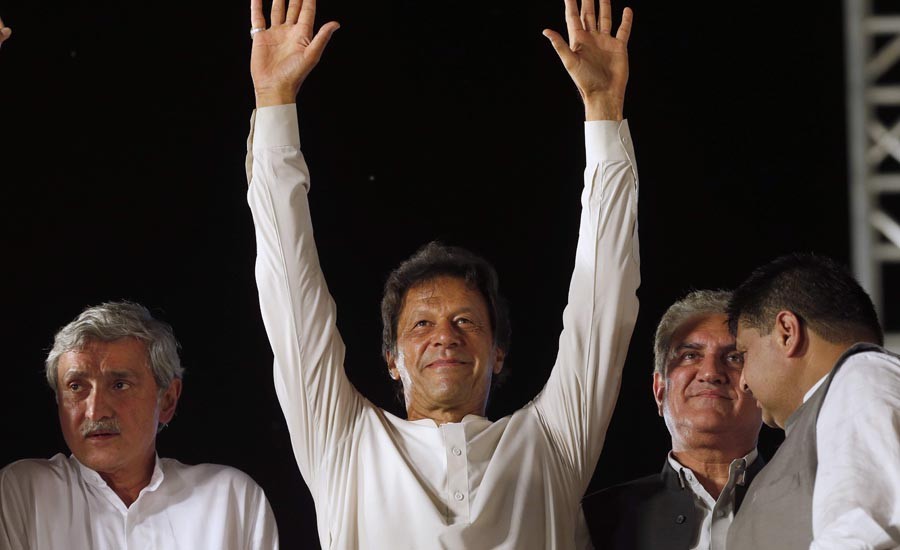 An interesting aspect of Imran Khan’s story is how he sometimes manages to arouse hope in the minds of even those who may not be consciously aware of it, much less inclined to acknowledge it. It is evidenced in the sharp cry of disappointment and frustration which follows some perceived blunder of his. And it is disappointment, let there be no mistake about it, even when the emotion seems to be overlaid with glee.

Perhaps Khan himself may not be aware of the number of people who wish him and his mission success among those he categorises, and castigates, with some justification, as being a class of Pakistanis determined to hate him because of a West-oxicated bias against him. Though they might once have been fond of applying the crude appellation ‘Taliban Khan’ to him, it is doubtful whether even they ever fully believed it. Certainly, whether they admit it or not, they are not without the intelligence to have differing expectations from people like him, the Taliban, and formally-registered political parties such as the JI or JUP.

Anyone with any knowledge of Pakistan’s society and history cannot fail to be aware of how dangerous even the accusation of blasphemy can be and what injustice and torment it can spawn.

I have been speaking of the self-professed liberals/progressives of Pakistan. Now let’s talk about the Muslims -- proudly conservative, cosmopolitan, openly practising Muslims who unsurprisingly follow Khan’s career with a degree of interest. Perhaps Khan finds it easy to dismiss the concerns of the ‘liberals’ about his actions during the Faizabad fiasco. But does he find it as easy to dismiss the concerns of these Muslims by using some choice epithet like ‘blood-thirsty’ for them?

Let’s talk a little more about this class of Muslims. We are those who are interested in seeing a continued place for religion in the politics of our country. We do not find the idea of a truly secular polity attractive or worth pursuing. We consider most modern states to be paternalistic to some degree, and we are comfortable with having the laws and traditions of Islam influence the form that state paternalism takes in our society.

We accept the role of Islamic law, as interpreted by traditional jurists, in shaping matters such as inheritance, marriage, and divorce for Muslim citizens of differing sects. We are not opposed to laws restricting the ready availability of alcohol for public consumption, and we support the wisdom of having the state maintain a degree of censorship on artistic content on a widely accessible medium such as television. We favour a curriculum which encourages citizens to gain some amount of knowledge about their respective religions, and whose cultural content is, to an inevitable but controlled degree, informed by the historical legacy of the majority faith of the country.

With such unashamed views and aspirations about the place of Islam in our society, one would have to go a long, long way into the European past to even try to reconcile the definition of liberal/progressive with us. Certainly, it comes as no surprise that people today might find it difficult to do so. However, we endeavour not to mind this and strive to remember both the positive linguistic connotations and the harmful potential of this terminology, as Khan himself likes to remind us.

While not wishing to misrepresent ourselves as out and out victims, many of us, locally and globally, do spend our days navigating an elite technocratic and intellectual environment where people are frequently uncomfortable with seeing Islam seated at the same table as themselves rather than being around merely in the guise of teaboys, typists, waiters, chauffeurs, and maidservants.

We have our own views and beliefs about what goes into building a decent and generous society. We try, though, not to stuff them down other people’s throats, and endeavour to promote an atmosphere of civility amidst diversity. Since this is supposed to be the age of postcolonial frankness rather than the reticence or discretion encouraged in an earlier colonial age, we exercise our right to voice and argue for our views when the occasion demands. This can occur at the cost of accepting a relative distance from the avenues of professional privilege and excellence, and sometimes this is the choice we make rather than go against our spiritual and moral convictions.

We share a number of views about state and society with self-declared liberals/progressives, and then there are numerous views we do not share with them and, often having less political and monetary power, we are sad but willing to deal with the personal and political repercussions of this on the global stage.

We try to live with the ravages of colonialism, and to carve out a dignified space for ourselves. It can be a struggle, despite the strength of our desire and commitment. And what makes the struggle especially painful to bear is when we witness the name of our religion and our Prophet being used and abused as a political weapon to cause upset and ugliness in society. Forces among us which do so hurt and humiliate us. They not only betray us and our struggles, but undoubtedly also the voice of their own conscience.

The Faizabad fiasco was not of the PTI’s making. Nor was it a problem that the PTI was directly compelled to handle. That difficult lot fell to the PML-N, and the PTI should have felt grateful to keep away and maintain a low profile as some other parties have done. Instead, Khan took the very deliberate decision to fan the flames in this thoroughly unimportant matter. Any fool knows that the change in the amendment (later corrected) was far too insignificant to satisfy the ostensible desires of any Western government, but the PTI’s top leadership repeatedly appeared on news channels to stir up hysterical visions of the government hatching secret (and blasphemous!) plans to conspire against the very ‘ethos’ of the country.

There can hardly be any doubt that unlike many of the illiterate and impoverished participants of the Faizabad protest, PTI leaders did not believe the words they were speaking as they huffed and puffed away on television, making a great show of their insincere and over-the-top indignation. Could any person of their profile and exposure believe that the ‘ethos’ of the nation could be so endangered by a slight change in the text of a document, later reversed?

It was simply a political gambit against a government which was already foundering due to far more major and real misdemeanours. The PTI leaders apparently strove to mimic the voice of the ‘common man’, raging against blasphemy. Now it is often admirable to try to understand and come close to the common man. But such cynical pretence? It was an act of profound lewdness.

Khan is wrong in acting as if only the ‘liberals’ are critical of his actions in this affair. So are many conservative Muslims in this country who feel stricken to see groups and individuals blithely use the grave charge of blasphemy to intimidate and terrorise their personal and political opponents in this society. It hurts us spiritually and wrecks our mental peace to see the name of our religion being defiled in this unethical manner.

Anyone with any knowledge of Pakistan’s society and history cannot fail to be aware of how dangerous even the accusation of blasphemy can be and what injustice and torment it can spawn in a society where it becomes a casual habit to toss around such accusations. Yet Khan’s party has promoted the use of this tactic at least twice now. In Faizabad this year, and earlier in 2014, when it threw its weight behind another politically-motivated blasphemy allegation against a television programme. This repeated outrage does not, unfortunately, surprise us. What it does is distress us. Deeply.

It is sad that after so much legitimate hard work, Khan still does not have sufficient trust in God to lead him to his desired destiny. Despite his every effort to bring it about, he should be grateful if the government does not, in fact, fall as a result of this particular fiasco. Khan seems like a man with an eye to his political legacy. Well, his legacy will not start to be written if and when he does become PM. It has started to be written already. All of this is being counted. All of it.

Blasphemy is a dirty business in this country, and Imran Khan is getting his hands very dirty indeed. He should perhaps remember that financial corruption is not the only kind of corruption that exists. There is also such a thing as moral corruption.

The politics of blasphemy