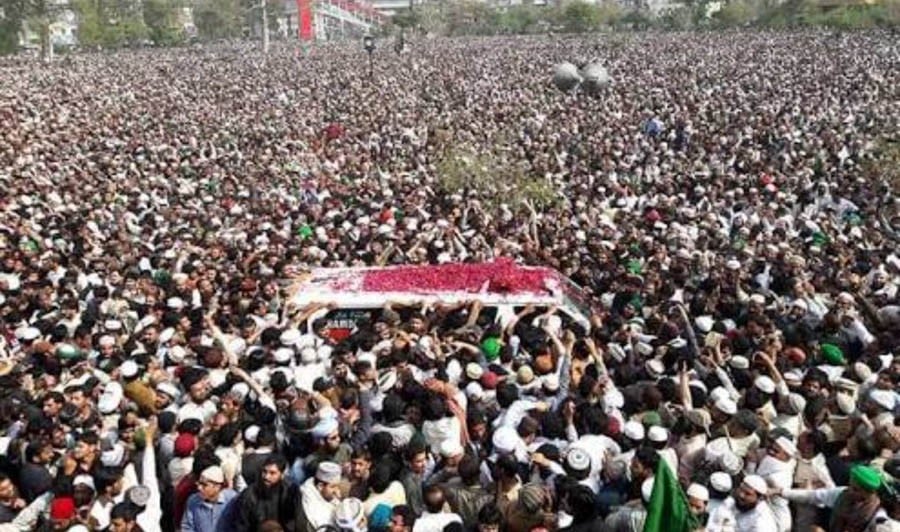 Let’s, for a moment or two, forget about contemporary Pakistan. It is 1924 and India is under the British Raj.

Mahashe Rajpal, an Aray Samaj activist, publishes a blasphemous pamphlet in Urdu, written by an anonymous author. Indian Muslims are offended by it. A long legal battle ensues and Justice Dalip Singh of the Lahore High Court acquits Rajpal because the law does not stipulate any punishment for blasphemy.

But Indian Muslims are not to be consoled for the honour of their Prophet (PBUH) has been defiled. A few weeks after Rajpal’s acquittal, a Muslim cleric lambasts the judge for acquitting Rajpal and declares that Rajpal will have to pay the price for blasphemy. He declares that if the British government is unable to take any action, the Indian Muslims will take the law in their own hands. Mullahs declare that Rajpal is to be killed for blasphemy.

On April 6, 1929, Ilm-ud-Din, an illiterate man of 20, stabs Rajpal to death. Ilm-ud-Din does not try to flee and quietly surrenders. Indian Muslims hail him as a hero.

One cannot create a country in the name of religion and then say that religion has nothing to do with the business of the state.

Ilm-ud-Din is tried in the court. A popular Muslim poet asks an influential Muslim barrister to represent Ilm-ud-Din. The court sentences Ilm-ud-Din to death. He is executed on October 31, 1929 and an influential Muslim writer arranges his funeral, which is attended by thousands of Indian Muslims. He is called an ashiq-e-rasool and hailed as a ghazi as well as a shaheed.

The massive agitation by Indian Muslims forces the British government to add a sub-clause to Section 295 of the Indian Penal Code according to which ‘deliberate and malicious acts intended to outrage religious feelings of any class by insulting its religion or religious beliefs’ become punishable offences.

Fast forward to 2010. The British Raj is no more. Pakistan has been an independent country for the last sixty odd years during which Pakistani governments have included two more sub-clauses to Section 295 of the (now) Pakistan Penal Code, according to which the ‘defiling of the Holy Quran’ is punishable with life imprisonment and the ‘use of derogatory remarks in respect of the Holy Prophet’ with death or life imprisonment.

A year earlier, a group of Muslim women has accused Asia Noreen, an illiterate Christian woman of insulting the Prophet of Islam. In November 2010, she is sentenced to death. A month later, Salmaan Taseer, the governor of Punjab visits her and remarks that Pakistan’s blasphemy law is ‘a black law’ and needs to be repealed. The mullahs declare that Salmaan Taseer has blasphemed by talking about repealing the blasphemy law and the governor must be punished with death.

On January 4, 2011, Mumtaz Qadri, a young man of twenty-six and a member of Salmaan Taseer’s security detail, shoots him dead in Islamabad. Mumtaz Qadri does not try to flee and quietly surrenders. Pakistani Muslims hail him as a hero.

Qadri is tried in the court. Hundreds of lawyers offer to represent Qadri pro bono. He is represented by a former chief justice of the Lahore High Court. Qadri is sentenced to death and he is executed on February 29, 2016. His funeral, held the next day, is attended by thousands of Pakistanis. He is called an ashiq-e-rasool and hailed as a ghazi as well as a shaheed.

Before one dismisses the relationship between these two events as correlational, a brief note on those who defended Ilm-ud-Din is in order. The defenders of Ilm-ud-Din were not a bunch of bearded, semi-literate, potbellied, halwa-eating mullahs. Instead, they had attended top British universities. They drank whiskey, wore expensive suits, and in a couple of cases even married non-Muslim women.

The cleric who castigated Rajpal and Judge Dalip Singh was Mohammad Ali Jauhar, an Oxford graduate and one of the founding members of the All India Muslim League. The poet who supported Ilm-ud-Din was none other than Allama Mohammad Iqbal, a graduate of Trinity College. The barrister who represented Ilm-ud-Din was none other than Mohammad Ali Jinnah. But perhaps the greatest irony lies in the fact that the poet who had arranged the funeral was Mohammad Din Taseer (Salman Taseer’s father) -- one of the first Indian Muslims to have earned a doctorate in English literature from Cambridge.

The point of this juxtaposition is to argue that the link between these two events is not correlational but causal. This juxtaposition offers a unique telescope to understand religious undercurrents in Pakistan.

Conversations and debates on the rise of religious fanaticism in Pakistan often tend to veer to General Zia-ul-Haq, who imposed martial law in 1977 and stayed as the president of the country till his assassination in 1988. A vast majority of Pakistani liberals considers Zia-ul-Haq’s Islamisation as the main reason for Pakistan’s current woes.

The founding fathers of Pakistan employed Islam to unify Indian Muslims against both Indian Hindus and the British government. But for all their fancy degrees and titles, they did not have the slightest understanding of what the employment of Islam as a unifying force would entail. They did not have the remotest clue about the immense diversity of Islam and considered it a monolith. They knew from European history that the marriage of church and state was a recipe for disaster but there was an absolute, unabashed refusal on their part to learn from history.