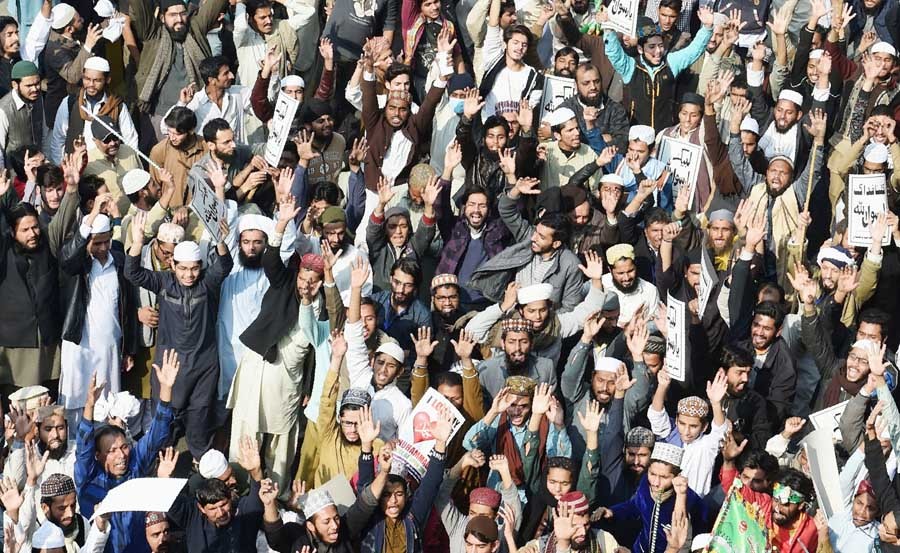 The recent sit-in of Tehreek-e-Labbaik Ya Rasool Allah (TLYR) in Islamabad was a matter of concern for many. The language and tone displayed in the protest was worrisome. During the countrywide protest and subsequent crackdown, at least six people were killed and scores sustained injuries.

The Barelvi school of thought has been considered as one of the most peaceful factions of Islam. The followers of Ahmed Raza Barelvi, along with some Deoband scholars like Shabbir Ahmed Usmani, defended the establishment of Pakistan at the time when the famous Ahrar movement was staunchly opposing the partition along with other religious parties.

The pirs and gaddi nasheens openly came out in support of independence. After the anti-Ahmadi riots in 1953, an inquiry commission under Justice Munir was constituted to investigate the riots.

Justice Munir Commission Report states, "In every important speech one leader of theirs or another criticised the Muslim League and its leadership, including the Quaid-e-Azam for whom they had little love and who in those days had come to be regarded as the sole and undisputed leader of the Muslim nation. They called him an infidel.

The latest wave of violence from Barelvi outfits resumed when the then Governor of Punjab Salmaan Taseer was killed by his own guard, Mumtaz Qadri, on January 4, 2011 in Islamabad.

According to historian Dr Tahir Kamran, "Majlis-e-Ahrar-e-Islam was founded in 1931 with inspiration from Deoband school of thought".

The famous Rabwah incident provided an opportunity to Deoband and Islami Jamiat Tulaba (IJT) to organise and mobilise themselves where Barelvis had a subsidiary role. On May 29, 1974, some members of the Ahmadi community tortured students of Nishtar Medical College, reportedly affiliated with IJT at Rabwah, the headquarter of the Ahmadi fraternity, provoking countrywide protest against the community.

Jamiat-e-Ulema Pakistan (JUP) head, Maulana Shah Ahmed Noorani, who was a Barelvi, tabled a bill in the National Assembly duly signed by 28 members. The bill was moved forward by the then opposition leader, Maulana Mufti Mehmood, a Deobandi head of Jamiat-e-Ulema-e-Islam (JUI), demanding that Ahmadis be declared non-Muslims.

After a comprehensive debate in the parliament for about two months, Ahmadis were declared non-Muslim on September 7, 1974. The Noorani-led JUP was an integral part of Pakistan National Alliance. The electoral alliance against Zulfikar Ali Bhutto-led PPP took out massive rallies and their leaders were jailed.

During the Afghan war, General Zia also aligned himself with Deoband organisations. Another reason was the Saudi petro dollars, which was only possible to funnel through Deobandis.

Dr Kamran believes, "The Barelvi activism revolves around Namoos-e-Risalat (Sanctity of Prophethood). In fact, it’s a reactive mode against the rapid growth of Deobandis’ ethos where the later considered itself as the vanguard of Islam and was first witnessed during the 1980s when Dawat-e-Islami was formed".

In the early days of 1991, Saleem Qadri, a resident of Baldia Town Karachi, founded the Sunni Tehreek (ST) to counter the growing influence of the Deoband outfit. Qadri also contested elections of the provincial assembly in 1988 from the platform of JUP but was defeated. His son, Bilal Saleem Qadri, told TNS, "The ST was established to defend our mosques and seminaries from the occupation of Sipah-e-Sahaba Pakistan (renamed as Ahl-e-Sunnat Wal Jamaat)."

On May 18, 2001, Saleem Qadri’s vehicle was ambushed in Baldia Town, killing him along with his five associates. Citywide violence erupted as several vehicles were torched and the metropolis was paralysed. Later, a close lieutenant of Saleem Qadri and a founding member of ST, Abbas Qadri, took over the command. Sunni Tehreek gained strength under his leadership.

In April 2006, on 12th Rabi-ul-Awwal, as the entire leadership of ST gathered at Nishtar Park Karachi, a massive bomb ripped through the congregation, killing more than 50 people, including the top command of ST. After consultations, Sarwat Ijaz Qadri, an old stalwart of the party, was appointed as the new head of the ST. Under his command, the outfit flexed its muscles and was involved in criminal activities.

According to WikiLeaks, on April 22, 2009, the United States’ consulate in Karachi sent a secret cable under the subject, "Sindh -- the Gangs of Karachi." Details of various political and other groups, including MQM, PPP, ANP, ST, Arshad Pappu, and Rehman Baloch were listed in the message.

According to the cable, "ST is a small religious/political group with a presence in small pockets of Karachi. The group has only managed to win a handful of council seats in local elections but militarily it is disproportionably powerful because of the influx of MQM-H (Afaq Ahmed-led MQM faction) gunmen after the government crackdown on MQM-H."

The cable further says, "ST has organised the party and its gunmen along the lines of MQM by dividing its areas of influence into sectors and units, with sector and unit commanders. ST and MQM have allegedly been killing each other’s leadership since the April 2006 Nishtar Park bombing. ST blames MQM for the attack."

In January 2007, Sunni Tehreek was placed on the watch list of the Ministry of Interior. During 2010, ST registered itself with the Election Commission of Pakistan as Pakistan Sunni Tehreek. Another faction of ST is headed by Bilal Saleem Qadri, the son of founder leader Saleem Qadri.

During a suo motu case of Karachi law and order situation in 2011, various reports were submitted by the police, Rangers and intelligence agencies. While giving a reference of the reports presented to the then Chief Justice of Pakistan, Justice Iftikhar Chaudhry, Islamabad-based Centre for Strategic and Contemporary Research (CSCR) stated in a research paper, "In a report sent to the police by intelligence agencies about extortionists, it was stated that out of the mentioned 48 extortionists, 19 belong to the ST. During the hearing of Karachi law and order implementation case by the Supreme Court of Pakistan, it was mentioned several times that ST was involved in targeting killings and extortion. In March 2013, a report submitted by Inspector General (IG) Sindh Police to the Supreme Court’s Karachi registry included a list of 224 target killers arrested since 2011, 38 of which were affiliated with the ST."

On June 17, 2015, Rangers conducted a raid at ST headquarters in Old City area of Karachi during a party meeting, apprehending party leaders and workers. The ST Chief, Sarwat Aijaz Qadri, along with others were summoned at the Rangers headquarters and were detained for eight hours. After six days, Sindh Rangers disclosed the arrests of 11 party workers and presented them in Anti Terrorism Court. The arrested men were accused of being involved in over 66 murders, target killings of MQM workers, political clashes, extortion, storing illegal arms, kidnapping for ransom and street crime.

According to sources, the Barelvis are in a majority in Punjab, Sindh and Azad Kashmir and there are around 3000 seminaries affiliated with the belief with about one hundred thousand students enrolled.

Barelvi activism was observed when blasphemous cartoons were published in a Danish newspaper in September 2005, causing a massive outburst of Muslim protests across the globe. A huge rally was taken out from Data Darbar Lahore on February 14, 2006 under the leadership of Mufti Sarfraz Naeemi of Jamia Naeemia. Several businesses, including KFC, McDonald’s, Pizza Hut, a hotel, two banks, the office of a mobile company, vehicles and two movie theaters were ransacked. At least two people were killed and dozens were injured during clashes with police.

The latest wave of violence from Barelvi outfits resumed when the then Governor of Punjab Salmaan Taseer was killed by his own guard, Mumtaz Qadri, on January 4, 2011 in Islamabad. Taseer was critical of the blasphemy laws of the country. Mumtaz Qadri, a follower of Barelvi School, was awarded death sentence. Right after the verdict, protests were staged in several cities demanding suspension of the punishment.

Leaders of the same fraternity started delivering speeches against the Nawaz Sharif government. Qadri was hanged on February 29, 2016. The next day, on March 1, his funeral was offered at the famous Liaquat Bagh, Rawalpindi.

According to media reports, Pakistan Sunni Tehreek volunteers were providing security to the procession. The Chehlum was observed on March 27 at the same place. As the event ended, thousands marched towards the capital and stormed the Red-Zone. They reached outside the Parliament and staged a sit-in. The protestors were demanding execution of the blasphemy-accused Aasia Bibi, the woman former Punjab Governor Salmaan Taseer was killed for defending. The number of law enforcement personnel and civilians were injured, vehicles and metro station were also set in fire.

What is the TLYR up to today? "Keeping a staggering approach, TLYR is redefining the Barelvi Islam while reclaiming their political space," says Abbas.

How TYLR has evolved in the short span of  two years

The three parties were functioning under Tehreek-i-Rehai Mumtaz Qadri (Movement for the Release of Mumtaz Qadri) since 2013.

At the burial of Mumtaz Qadri, Pir Afzal Qadri proposed the movement be renamed as Tehreek-e-Labbaik Ya Rasool Allah. The proposal was accepted immediately. Dr Muhammad Ashraf Asif Jalali was selected the chairman and Pir Afzal Qadri was made the founder and patron-in-chief. The main shura of TLYR has 70 members.

According to the organisation’s website, "it was founded on 1 August 2015, at Nishtar Park, Karachi. TLP began as an Islamist social and political movement. Seventy-five people attended the first meeting and became the first 75 members of the movement".

However, differences emerged within TLYR, and Dr Jalali parted ways to establish his own faction. Allama Khadim Hussain Rizvi was nominated as the organisation’s ameer.

The TLYR decided to step into electoral politics and registered itself with the Election Commission of Pakistan (ECP) on September 28, 2017.

Rizvi moved to Lahore in mid-1970s to acquire religious education. His brother Ameer Hussain is a retired Junior Commissioned Officer (JCO) of Pakistan Army. His brother-in-law is also a retired JCO.

Around the time Mumtaz Qadri was executed, Rizvi was the speaker of Jamia Masjid Makki situated near Data Darbar in Lahore. He was a government servant as the mosque was under the Auqaf Department Punjab. He was terminated from the office when he started delivering anti-government speeches.

This year on March 17 while addressing a Friday sermon, Jalali accused the then Prime Minister Mian Mohammad Nawaz Sharif of committing blasphemy. "At the Holi gathering, the Prime Minister (PM) of Pakistan delivered blasphemous words that pose a great danger. The PM of Pakistan violated his oath, ideology of Pakistan, Quran and the Sunnah. His (PM) speech was a dangerous assault on religion as he (PM) attributed his concocted statements as (word of) Quran and Sunnah. We openly demand him to render an apology," he said.