An icon of enlightened literature

With the death of Muhammad Ibrahim Joyo (1915-2017), progressive writers and thinkers have lost a leader and teacher 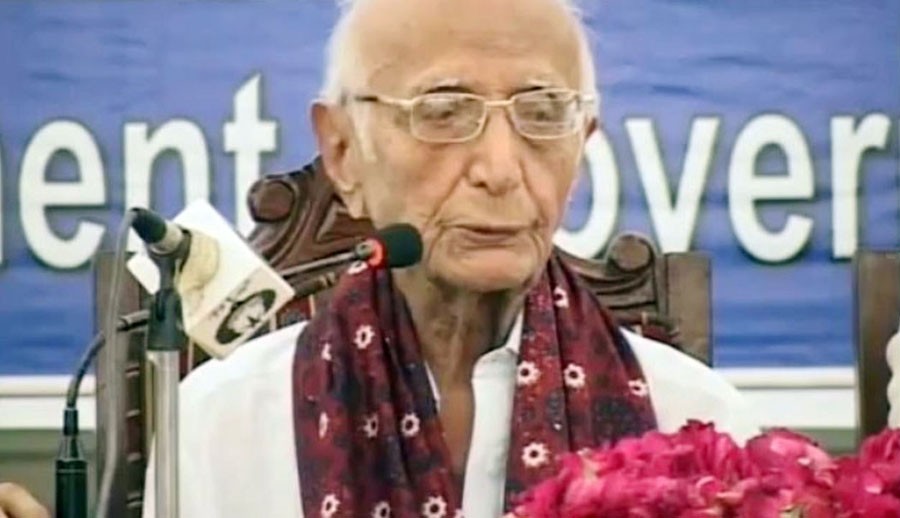 On November 9, 2017, when we were celebrating the 140th birthday of Allama Muhammad Iqbal, the news of the demise of Mohammad Ibrahim Joyo saddened us. No doubt, in the death of Joyo, Sindh particularly and progressive forces all over South Asia generally have been deprived of a veteran icon of enlightened literature and rationalism.

He was born on August 13, 1915 at village Abad near Teerath Lakki (now called Lakki Shah Saddar) in the present district of Jamshoro of rural Sindh. When he was only three years old, his father died. After iddat or mourning period, his mother was forced to remarry. As such, his grandparents brought him up. His grandparents, despite being poor peasants, wanted to give him good education.

In one essay, he recalled his first day in the school and his first teacher Teekan Mal. His grandmother took him to a government school where he studied Sindhi studies up to 4th grade. In the exam of fourth grade, he secured first position and was awarded two books titled Guldasto (a bouquet of flowers -- an anthology of essays) compiled by Ms Dewan Dayaram Wasanmal and Leelaram Premchand and another book Gulan dee Tokari (A basket of flower) by Mirza Kalich Beg. His teacher Teeken Mal advised Joyo to read the books and follow the instructions therein. Joyo admitted that he had followed that advice all his life.

Many books were assigned to various persons for translation. According to Siraj Memon, most of the translations were very poor, but Joyo improved them and in some cases retranslated whole books and never claimed any credit.

Joyo’s village, along with the school, got inundated in 1924 and for years, they could not find a permanent place to live in. After a few years of schooling in a nearby institute, he was admitted to Sindh Madrassatul Islam (SMI) School, Karachi, from where he passed the examination of matriculation in 1934. As he secured second position in district Dadu (which at that time included present Karachi and Thatta), he was awarded twenty rupees as scholarship, which enabled him to continue his education up to graduation.

In the preface of one of his books, he speaks fondly about his love of books especially published by renowned Thinker’s Library sponsored by Rationalist Press Association, UK, during his college years from 1934 to 1938. He writes that his friends’ circle used to compete with each other in reading and collecting more books of that library.

In 1938, he was appointed as assistant teacher in SMI, Karachi. In 1940, he went to Mumbai (Bombay) to do his Bachelors of Teaching on government scholarship. His stay at Bombay provided avenues for his political awakening.

He writes that in the hostel he used to read daily Times of India newspaper, where every week, articles of MN Roy were published. After reading his two or three write ups, he was so mesmerised by his writing that he eagerly waited for the day when his essay used to be published. It seems that he also briefly met him and came into contact with followers of MN Roy.

After coming back to Karachi, he rejoined his alma mater and also became member of Democratic Radical Party, founded by MN Roy. Along with some other members they started to publish Freedom Calling magazine. He also contributed articles in that weekly.

In 1945, he translated MN Roy’s book Historical Role of Islam in Sindhi, which was his first translation. He afterwards became a translator par excellence and took the standard and art of Sindhi translation to such heights that it will take decades to match it. In the next year, he also penned his first English book Save Sindh and Save Sub Continent, which cost him his job in SMI, Karachi.

In 1951, he passed Public Service Commission Examination and became Secretary of Executive Committee for Sindhi Literature, which was rechristened as Sindhi Adabi Board (SAB) in 1954. This committee, and later board, was run by board of governors, which included renowned persons of Sindh such as G.M Syed, Miran Mohammad Shah, Allama I.I. Qazi, Dr. U.M Daudpota, Pir Hissamuddin Rashidi, Dr. NA Baloch, Dr. Ghulam Ali Allana and other luminaries.

He worked there up to 1961. During that period, he also worked as Editor of quarterly Mehran published by Sindhi Adabi Board. After a gap of one year, he once again rejoined as secretary of the board on additional assignment and worked there up to 1967. Under his patronage, Sindhi Adabi Board conceived and designed various projects such as publications of old Persian books containing history of Sindh, writing of history of Sindh in eight volumes, collection and publication of Sindhi folk literature in thirty volumes and translation of world renowned books in Sindhi. The board has published hundreds of titles on History, folk literature, fiction and other topics of social sciences, which has enriched Sindhi language.

As editor of Mehran, he encouraged, guided, polished and mentored various writers who later became big names of Sindhi literature such as Shaikh Ayaz, Sirajul Haq Memon, Imdad Hussaini, Ustad Bokhari, Rasheed Bhati and so on. Ayaz has conceded that under the influence of Joyo, he gave up Persianised diction and developed his own diction.

Before partition, hundreds of books were translated in Sindhi, but partition disrupted this flow, which was very essential for not only enrichment of Sindhi language but also for intellectual development of Sindhi speakers. As stated above, the board had launched a project for translation of world renowned books in Sindhi. Many books were assigned to various persons for translation. According to Siraj Memon, most of the translations were very poor, but Joyo improved them and in some cases retranslated whole books and never claimed any credit.

He himself translated a good number of books including Emile or On Education of Emile written by Jean-Jacques Rousseau (1712-1778), On the Education of Children by Plutarch, Savage Survival by J. Howard Moore, The Right to Heresy by Stefan Zweig, Galileo by Bertolt Brecht, Children’s life of Christ by Enid Blyton, An Elementary Course in Philosophy by Georges Politzer, Pedagogy of the Oppressed by Paulo Freire, The Story of Peasant by Emile Erckmann and Alexandre Chatrian and a good number of essays of Dr GM Mehkari published as one book.

His first original book in Sindhi was Shah, Sachal and Sami, wherein he has not only discussed the art of these renowned poets but also delineated on socio-economic and political history of Sindh from seventeenth century to nineteenth century. This book has also been translated into Urdu and English.

His English writings have been published in a bulky volume titled The Betrayal - Sindh Bides the Day for Freedom. He has also translated Sindhi books of G.M. Syed in English. In total, his publications cross the number of fifty.

He also founded or participated in the establishment of some important organisations, including Sindhi Writers Cooperative Society, which published 40 books, Sindh Friends Circle, which published more than twenty books or booklets, Servants of Sindh Society and Sindh Education Trust. He donated the award money received from Pakistan Academy of Letters to SIUT.

Throughout his life, he remained undisputed leader and guide of progressive and secularist writers of Sindh. He also mentored few writers-cum-politicians such as Rasool Bukhsh Palijo, who himself has acknowledged the influence of Ibrahim Joyo. His love for Sindh knew no bounds, therefore, behind the scene, he has also played a key role in formulating and devising various strategies for ameliorating the plight of Sindhi people. Sindhi literature will remain indebted to him for centuries.

An icon of enlightened literature