Mind what you eat

The issue of food allergies has long been ignored 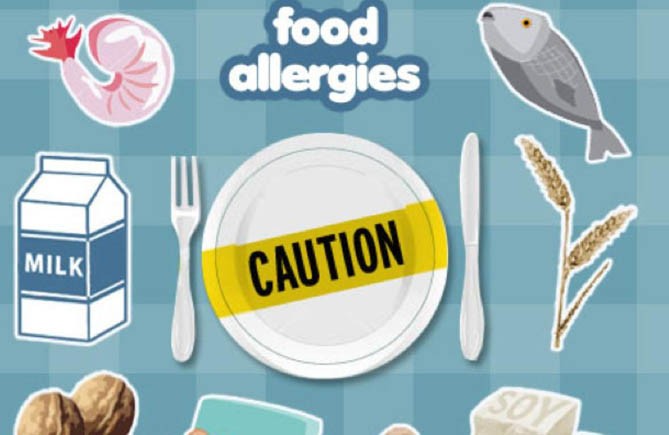 "I had never thought peanuts could be so life-threatening," says Zara, the bewildered mother of seven-year-old Natasha who hung between life and death, only because she had eaten peanut butter sandwich at school.

"Natasha often got cold when she ate peanuts, but I did not notice, that it was because of peanuts; I always took it as a seasonal allergy and so did her pediatrician," says Zara. At thehospital, Natasha was asked about what she ate, and when she uttered the very words peanut butter sandwiches, the doctor was quick to diagnose that she had contracted a severe form of food allergy called Anaphylaxis. "It is a life-threatening reaction which impairs breathing and can cause shock. Dramatic drop in Natasha’s blood pressure, lump in throat, diarrhea, loss of consciousness, all confirmed the very symptoms of anaphylaxis," says Dr Ather Niaz Rana, allergy specialist at Shifa International Hospital Islamabad.

Diagnosing a food allergy is tricky. It is often confused with gluten intolerance and also with food poisoning.

Peanuts are one of the most common foods causing allergies, the yummy and nutritious nut is absolutely not made for people like Natasha. "People sensitive to peanuts can have allergy even by touching it, or they can even have an asthma attack just by inhaling peanut dust," says Dr Rana.

The issue of food allergy has long been ignored in our society. In recent years, dust and pollen allergy have brimmed to the surface and people have become somewhat aware about them. But there is little awareness about food allergy. If we refuse to eat something, we have to hear the golden phrase, "Sub kuch khana chahye kuch b nai hota, bus wahem nahi karna chahye." (Eat everything, nothing happens. Don’t be suspicious). "Sometimes this wahem (suspicion), and noticing that some food is causing you allergy, proves good, and it can save your life," says Dr Rana.

An allergic reaction occurs immediately after eating an allergen or within two hours. Along with peanuts other common allergens are milk, soy, eggs, shellfish, nuts like walnuts and tree nuts, wheat and some fruits. Adults as well as children have food allergy. Food allergy is the abnormal response of body’s protection shield (immune system) which considers a protein or some other nutrient in food, a threatening invader and starts reacting by producing an army of antibodies called IgE (immunoglobulin E).These are responsible for a wide range of symptoms of food allergy, ranging from mouth to cardiovascular, respiratory and gastrointestinal symptoms.

"Nasal congestion, runny nose, swelling of lips, tongue, throat and face, vomiting, diarrhea, shortness of breath, hives, trouble breathing, paleness, fainting and dizziness are common symptoms of food allergy," says Dr Rana. It can also result in inflammation of sinuses, stomach and esophagus. Inflammation of esophagus (the tube from throat to stomach) is very painful in toddlers and infants. Because they feel hard to swallow and get feeling of something stuck in their throat. "They are not able to explain it, so they become irritable and weak, because of weight loss and poor eating."

Children with milk, egg and soy allergies mostly overcome these as they grow up, but nutritional deficiencies in infancy may cause complications later. Parents do worry but most of the time, they are not able to catch the root cause. Most pediatricians also fail here. According to Dr Rana, "Pediatricians should be educated on food allergy in children, as allergy specialists are rare to find, there are only a few allergy specialists in the country."

Elaborating the causes of food allergy, Dr Rana mentions the genetic factor. "It tends to run in families". Obese and underweight, both are at risk of getting allergies. "Low immunity is perhaps the major cause because a non-efficient immune system cannot differentiate between friend and foe," says Dr Rana.  The modern compact world trapped in offices and bedrooms with all of its technology; has given rise to a sun deprived generation, deficient in vitamin D. Vitamin D is a vital nutrient in strengthening immune system. "Moreover genetically modified, and insecticide and pesticide sprayed diets are deprived of many vital nutrients and are low in antioxidants which are vital for an active immune system".

Diagnosing a food allergy is tricky. It is often confused with gluten intolerance and also with food poisoning. "Gluten intolerance occurs when gluten (a protein in wheat, barley etc.) reacts with the villi in intestines, producing infection in them so that they are not able to absorb nutrition. It does not involve immune system".

Dr Rana demonstrates some of the diagnostic techniques for food allergy testing. A simple blood test to find out the presence of IgE antibodies can confirm food allergy. Skin prick test is also helpful. A sterile probe dipped in liquid form allergen is used to prick the skin. If a reaction occurs, for example mosquito bite like bump is formed; it shows you are allergic to that certain item. "Food challenge is also one of the effective ways of diagnosing. Food is given in small doses or in the form of pill and the patient is watched for response. It can be risky, so only an allergist can perform such type of tests in hospital," says Dr Rana.

Management of food allergy is simple for a sensible person. "If you love yourself, you simply have to give up peanuts or any other food you are allergic to." In case of children parents should make sure that their child stays away from the allergen. School and teachers should have knowledge about child’s allergy. They should also be guided to provide first aid to the child, if allergy occurs.

Cook carefully at home, and while eating out check ingredients in detail, because sometimes ingredients are masked, for example there can be peanut oil in salad dressing, or eggs in bakery items. While buying grocery, carefully check labels for ingredients. Cosmetics like soaps, lotions and creams may contain extracts of allergens for example tree nut or soy. Be careful while buying other skin products also because an allergen can produce eczema and dermatitis.

Treatment of allergy is mostly done by giving antihistamines which block histamine (the defender immune chemical). Steroids are also given to calm down the immune system. "Allergen immunotherapy is also getting popular; in which patient is introduced with small doses of allergen which are gradually increased to lower the immune response against the allergen. In case of anaphlix (epinephrine) adrenalin is given through auto injector which reduces swelling and obstruction.

According to Fiza Saeed, a registered nutritionist and dietitian, working at multiple health centres, "the best way to avoid allergies is to strengthen immune system: Leave sluggishness and sedentary life style. Being active promotes fresh blood flow in all organs and makes immune system active.

Include omega 3, vitamin C, magnesium and antioxidant filled diet in your daily routine. Ginger, garlic, bone broth, cloves and Neem are great for strengthening immune system. Dr Rana also affirms their effectiveness. "I have literally witnessed improvement in patients with allergy, who consumed these immune boosters on a regular basis," he says.

Allergy tension fatigue syndrome is common in people with food allergy because they remain in fear of an allergy attack which causes anxiety and depression in them. Children with food allergy get worried and even frustrated by the restrictions. Sometimes, they are violent about why can’t they have the desired item. Parenting is hard nowadays, but with a food allergic child it can be even harder. So be tolerant, endure, educate yourself and your child, and you can keep food allergies at bay.

Mind what you eat