A mystery, a road trip and a couple of clueless dads with extraordinary skills. 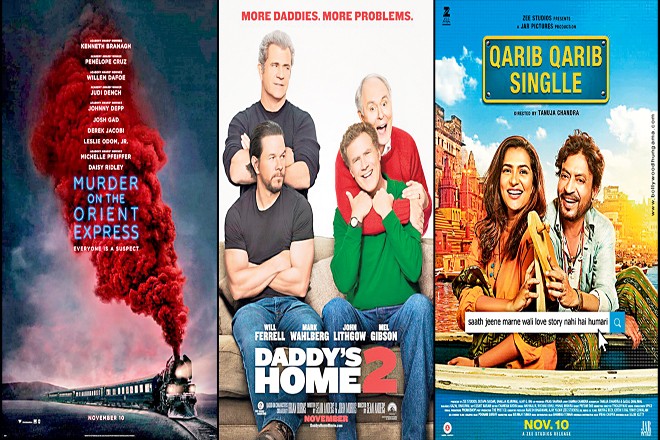 Murder on the Orient Express ***

Agatha Christie’s Murder on the Orient Express is one of those novels that have been adapted for the screen time and again. The latest adaptation by renowned director Kenneth Branagh is a good attempt but it is in no way the best. Yes, the film may win the ensemble cast award in any award show but overall it lacks the spark of a classic murder mystery, especially for those who have revered the novel.

The story revolves around a murder that takes place on a train but unfortunately for the murderer, Hercule Poirot is traveling in the same carriage. The world’s most famous detective then goes on to solve the case in his unique style but not before unleashing secrets of most of the passengers. Director Kenneth Branagh plays the Belgian detective but instead of having an egg-shaped head, he has a peculiar mustache that is too peculiar even by Poirot standard. The cast comprises the who’s who of Academy Awards including Penélope Cruz, Willem Dafoe, Judi Dench, Johnny Depp, Michelle Pfeiffer and others.

How is it that a film with such a huge cast doesn’t make it big at the box office? The problem (as Poirot says) lies in the plot that couldn’t be changed nor the murderer, who remains the same as in the book. There are some inconsistencies between the book and the movie but that’s all in good taste.

What would you get if you throw comedy genius Will Ferrell, action star Mark Wahlberg, the beautiful Linda Cardellini, the incredible John Cena, the veteran John Lithgow and the forever-young Mel Gibson in a film? The answer is Daddy’s Home 2, which is as big a rollercoaster ride this time around as it was 2 years ago. With so many talented actors in one frame, the film was bound to do well and it does, making the audience laugh at every mishap, no matter how bad it may be.

There are some improvements in this sequel to Daddy’s Home; the two dads Dusty and Brad (Mark Wahlberg and Will Ferrell) take care of their kids and step kids in unison until their Christmas is ruined by the arrival of their respective dads. Kurt (Mel Gibson) is Dusty’s father who has an eye for the ladies and loves to tell dirty jokes; Don (John Lithgow) is Brad’s father who is the ideal granddad but is carrying a secret no one knows about. Together, they go on a trip to a resort booked by Kurt and whatever can go wrong goes wrong. The arrival of another Dad (John Cena) makes it all the more interesting.

Mel Gibson has the meatiest of lines in the movie while John Lithgow shows that he is still a class act who can make you cry and laugh at ease. The regulars Will Ferrell, Mark Wahlberg, Linda Cadellini and the kids do what they do best; the harmony between the co-dads sometimes looks like it is nearing an end but Brad’s brand of stupidity and Dusty’s brand of masculinity always save them from the worst situations.

Irrfan Khan’s name stands for quality films in Bollywood and Qarib Qarib Singlle is one more feather in his cap. Tanuja Chandra’s flick has him playing a role that only he could have done justice to while sharing a trip with his co-star Parvathy who is making her Hindi film debut in the movie. The coming-of-age movie is what Imtiaz Ali would have been proud of but sadly, it is better than the master director’s last attempt at making a travelogue love story.

QQS is the story of Yogi (Irrfan) and Jaya (Parvathy) who are mature adults looking for a partner; he is a happy-go-lucky guy with loads of money and she is a widow who works all the time to keep herself busy. The two meet through a dating website but take their relationship to a new level by visiting cities in India where Yogi’s exes reside with their partners. As they travel through many cities, they realize that they are compatible with each other despite their eccentricities (mostly Yogi’s) and their past.

Irrfan Khan stands out as the star performer; as a 40-year-old Yogi, he gets to recite poetry, roam around with money being his last problem and cracking jokes that are way too cheap. He likes to boast of his romances and that’s what irks his co-star Parvathy the most. The newcomer from Malayalam film industry may not look like the pretty Bollywood heroines but she can act and stand her ground in front of Khan. Their chemistry is what sets the screen on fire and the mishaps they encounter is what keeps the audience involved. Qarib Qarib Singlle has a killer-script that’ll keep you engaged with its ingenuity and ability to be different.

Omair Alavi is a freelance journalist who tweets @omair78
and can be contacted at omair78@gmail.com

A mystery, a road trip and a couple of clueless dads with extraordinary skills.