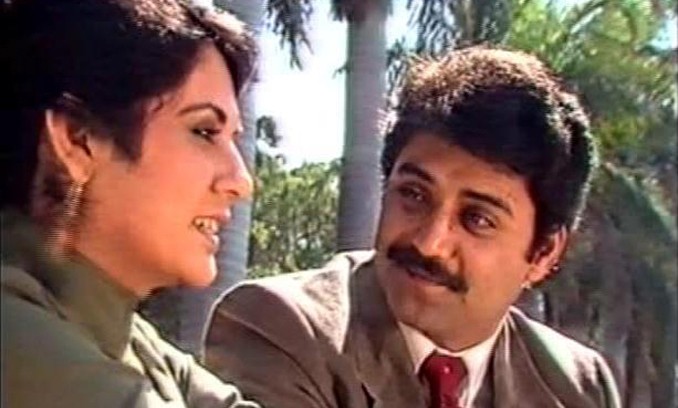 "In the beginning there was sound, then came light,

followed by action and Television was born. It grew,

-- This is PTV: Another Day, Another World by Agha Nasir, ex MD, PTV

1987. Venue: the Voice of America Bureau, New Delhi. Ravi Khanna, the bureau chief, had invited some journalists, writers, and family friends to an elaborate dinner. Drinks had been served and the room was humming with male and female chats and occasional laughter. I hardly knew anybody in the crowd except Ravi Khanna, the host, who had been my colleague in Washington DC for four years before he moved to India and I returned to Pakistan.

Suddenly, Ravi raised his hand and announced my presence in the room. When he said, "a writer-producer from Pakistan Television"… the buzz turned to pin-drop silence, and within the next three minutes, I became a celebrity. I was showered with all sorts of praise and then bombarded with questions about the PTV drama serials. Some senior invitees were curious about the cast of Uncle Urfee and Khuda ki Basti; the younger lot was more interested to know about the team that produced Un-Kahi and Tanhaiyan. One recurrent demand from all guests was that the credit-titles of all PTV plays should be in Roman script because majority of Indian viewers could not read Urdu.

The pioneers of PTV were very strict about the selection criteria: young men and women recruited in the late 1960s and the early 70s were rigorously interviewed by personalities like Aslam Azhar, Agha Nasir and Fazal Kemal

In the evening, Sateesh Batra, one of my hosts, took me out for dinner and on our way back we visited a video shop where I was surprised to see a whole section allocated to Pakistani plays. I could see the cassettes of all the PTV productions of the 1970s and 80s decorated in alphabetical order, their jackets printed in Hindi and Roman scripts. Considering me a potential customer, a smart salesperson stepped forward and said, "we have some new stuff from PTV, sir. Here are all the episodes of Drama 85 and Drama 86. They are like full length movies sir but no nonsense of dance or song numbers".

The next year when I visited the Bombay studios and Pune Film Institute, I saw the same enthusiasm for Pakistani drama in the showbiz community and among students of film technology. We can safely say that if the 1950s and ’60s were the golden period of Indian cinema, the 1970s and 80s were certainly the golden period of PTV drama.

Financed basically by taxpayers’ money, the PTV had to cater for all sections of society and it did produce excellent talk-shows, colourful musicals, engaging documentaries, imaginative programmes for children of all ages, and hilarious comedy shows. But drama has been its mainstay from day one.

The reason is simple. The pioneers of the PTV mostly came from radio or stage where drama was the king. The first batch of PTV producers consisted mostly of graduates of Government College Lahore which had been a talent nursery for decades and had trained writers like Kanhayalal Kapoor and Khushwant Singh, and actors like Dev Ananad and Balraj Sahni.

It is interesting to note that some of the best plays and serials emerged during the despotic rule of Ziaul Haq. He blatantly criticised and ruthlessly punished writers, thinkers, intellectuals and performers who upheld liberal values and tried to exercise their freedom of expression to awaken people’s awareness. If you watch the PTV plays of that era, you will find a sub-text in dialogues, an indirect slur on the tyrannical regime and the oppressive political atmosphere. The restrictions on writers and performers became a blessing in disguise and led to a subtle and symbolic expression which finally culminated in the full throttle satires of Anwar Maqsood and the apparently harmless but inherently injurious humour of Kamal Ahmed Rizvi.

In the 1990s, however, the scene started changing and by the beginning of the new century, PTV had completely lost its monopoly over drama, music, sports and current affairs. It still exists in regions where cable or satellite signal has not yet arrived, but in urban areas the PTV is, sadly, a forgotten story.

One wonders how a dynamic and vibrant national organisation like the PTV could collapse like this. In fact, this breakdown did not occur overnight…it took many years for the foundations to erode. Programme producers are the backbone of a media organisation. The pioneers of PTV were very strict about the selection criteria: young men and women recruited in the late 1960s and the early 70s were rigorously interviewed by personalities like Aslam Azhar, Agha Nasir and Fazal Kemal and then given the best training available in Pakistan or abroad.

This strict standard of selection could not be maintained in the 1980s and ’90s when political pressure and the culture of "sifarish" became prevalent. People who were originally recruited as clerks, sneaked into the prestigious realm of programme production and destroyed the whole production structure.

PTV never utilised the services of its ace producers after their retirement. Old hands like Kunwar Aftab, Yawar Hayat and Mohammad Nisar Hussain could have been re-hired to train the new staff or for general consultancy to maintain the production standards but they were never approached.

Ironically enough, PTV still has the largest production studios in the country, the largest number of employees, including the best news readers and comperes and the largest range of signals but we promptly change the channel every time we catch PTV while surfing.