A new alliance between MQM-P and PSP, said to have been brokered by the establishment, was in tatters in a matter of twenty four hours, leaving the city’s political future uncertain 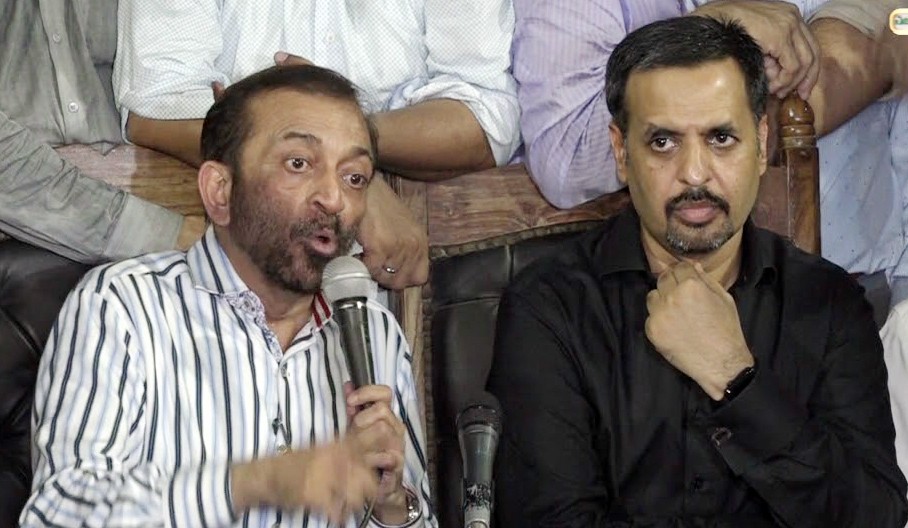 "Today I want to tell the entire Pakistan that yes, the establishment asked us to meet Farooq Sattar….and for the last eight months and through establishment, he (Dr Farooq Sattar) was talking with us to merge the PSP into MQM," claimed Syed Mustafa Kamal, Chairman Pak SarZameen Party (PSP) in an unprecedented news conference on November 11.

Kamal levelled a serious allegation that then MQM-Pakistan (MQM-P) was established under the supervision of the then Director General Sindh Rangers. "MQM-P was formed in the room of Major General Bilal Akbar."

It is pertinent to mention that Major General Bilal Akbar has hence been promoted to the rank of Lieutenant General and is serving at a very key position of Chief of General Staff (CGS).

It all began on November 8 when the MQM-P and the PSP leadership addressed a joint press conference at the Karachi Press Club. To avoid the division of Urdu speaking vote-bank, they announced to contest the upcoming general election of 2018 under one election symbol, name and manifesto.

The PSP considers it’s a do or die situation for them because they are not willing to form a political alliance with the MQM-P. There are very few option left for it minus this alliance.

The next day, on November 9, the MQM-P coordination committee expressed its reservations and rejected the idea of any alliance between the MQM-P and the PSP. The coordination committee member, Kanwar Naveed Jameel said, "MQM’s name, flag, election symbol and manifesto will remain intact and the party will contest the elections on the seats they have won earlier. The new arrangement will only be limited to those constituencies where the party lost the last elections".

While talking to journalists the same night, the MQM-P head, Dr Farooq Sattar criticised the coordination committee’s stance and announced to quit politics and party. He further said there was no space for ‘engineered politics’. "We cannot compromise on the blood of our martyred and cannot leave the MQM and its ideology".

Blasting at Mustafa Kamal’s attitude and tone during the press conference of November 8, Sattar revealed that he had sent a letter to the prime minister of Pakistan, Chief of Army Staff, DG ISI and DG MI, containing details of events of the last six months.

Karachi-based journalist Idrees Bakhtiar says, "Our establishment has been indulging in clandestine political activities or political engineering since long. They should restrict themselves within the parameters of the constitution; unfortunately, they have been blamed for violating the constitution."

The MQM-P is said to have reversed its decision of a political alliance or merger with the PSP after receiving a huge backlash from the party cadre, particularly its workers. In the press conference on November 9 where Sattar announced to quit politics, he conceded the workers were unhappy with the decision as well as the language used by Mustafa Kamal in his presser.

The PSP sources claim the possibility of merging one party into another and making a political alliance were thrown out in the initial meetings. The talks that continued for at least six months only tried to decide the modalities of forming a new party.

According to sources, a night prior to the joint press conference, a meeting was held at a ‘safe house’ located near the Mayor House Karachi in Defence Housing Scheme (DHA). One of the participants of the meeting claimed on condition of anonymity that Dr Farooq Sattar reached the safe house in DHA around 1am where he was asked to finalise the future of the MQM-P. Later, he was not allowed to leave the house before taking the final decision.

In the meantime, other leaders of MQM-P including Khawaja Izhar-ul-Hasan, Khawaja Suhail, Kanwar Naveed and Faisal Sabzwari gathered at Waseem Akhtar’s house. Later MQM-P spokesman Amin-ul-Haq also joined the discussion at Waseem Akhtar’s house? According to the same sources, Dr Sattar was allowed to talk over phone with his comrades. The party’s senior deputy convener, Amir Khan, was out of country but was being consulted over the phone. When the decision was finalized, the leadership of both the parties was asked to reach the safe house.

Idrees Bakhiar believes that apparently it was all done in haste by the ‘people concerned’ who have now publicly admitted to be meeting with these parties. "Since both these parties had not taken their supporters into confidence and had acted on the instruction of the powers-that-be, the nascent alliance fell apart earlier than many had expected."

Both the parties seem ready for the worst case scenarios at this political juncture. Kamal’s press conference on November 11 was an outburst against what he claimed as attempts to tag PSP with an establishment camp party. He was disappointed that the establishment did not give a shut up call to the MQM-P despite the fact that a news about a secret meeting had appeared in a newspaper. At one point he even said: "This press conference should have been held by the ISPR (Inter Service Public Relations) saying that yes we (the Establishment) had asked them (MQM-P and PSP) to come (in the meeting)".

The PSP is said to be facing a tough time ever since this press conference. After he had announced his November 11 press conference, Mustafa Kamal was continuously receiving some important telephone calls which he did not attend till he had finished talking to the media. Whatever he said has now placed him in hot waters and the ‘power corridors’ are not too happy with the PSP. This was quite evident when the DG Rangers Sindh, Major General Mohammad Saeed, appeared in a television interview and refuted all his claims but accepted that facilitation was provided for the meeting between both the parties "without any agenda".

The PSP considers it’s a do or die situation for them because they are not willing to form a political alliance with the MQM-P. There are very few option left for it minus this alliance. Either, they will quit politics, leave the country or face the music in the form of arrests.

The options for the MQM-P are not too dissimilar. It is not willing to surrender and hopes to keep fighting. And if the pressure does not slacken, it warns it will "expose the entire game in the media".