An evening for Lala Rukh

A visual, musical and literary celebration of the activist and artist was also a fitting reminder of WAF’s achievements 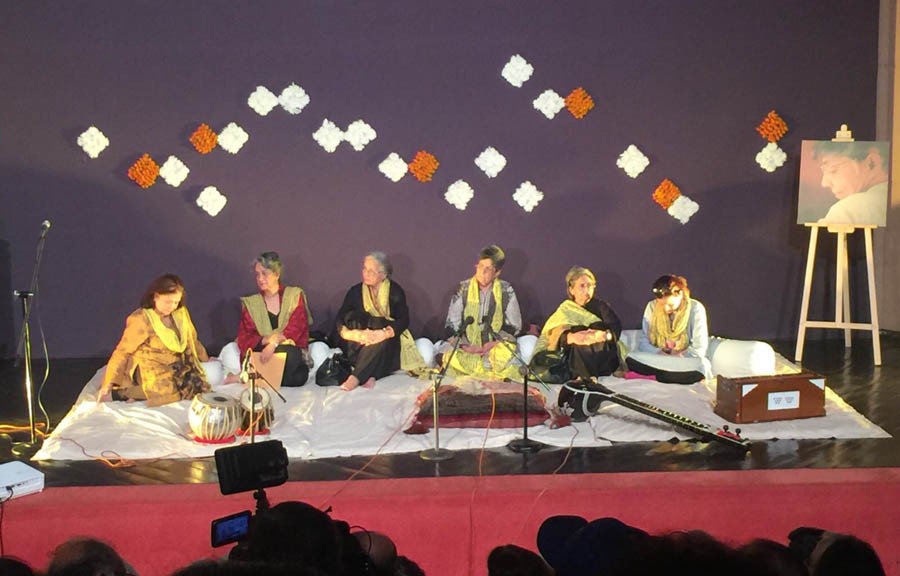 Of late it’s hard to escape the discomfiting feeling that the Women’s Action Forum (WAF), Pakistan’s foremost feminist collective, is an organisation frozen in the 1980s. Zia-ul-Haq’s dictatorship, that chopping block upon which every Pakistani liberal hones his progressive credentials, seems to have swallowed up WAF whole, for its achievements seem circumscribed to a time its women stood against the baton charge of Zia’s military dictatorship.

Does WAF today have any value beyond its annual nostalgia about the Mall Road march against Zia in 1983? What is its relevance when most of its founding members are now well into their 60s, and new memberships and initiatives seem nearly non-existent?

I pondered some of these questions on Monday at the Alhamra Arts Council in Lahore at an event held to commemorate the life of Lala Rukh, a founding member of WAF, who passed away recently. The event was held in collaboration with the All Pakistan Music Conference (APMC), an annual classical music conference in Lahore founded by Hayat Ali Khan, Lala Rukh’s father. Attached to the evening commemorating Lala’s life was a four-day long exhibition showcasing WAF’s archives, a well-curated and nostalgic spectacle that also looked ahead with its technically savvy display of the organization’s legacy.

The event benefited from the diversity of Lala’s own personality, flowing comfortably from feminism to music to art.

While some of the speeches at the event stayed firmly within the clichéd category, most were personal and refreshing, helping highlight the life and work of a woman who was a vital part of Lahore’s art and activism scene for the last five decades. The big guns of WAF’s history, Nighat Saeed Khan, Neelam Hussain, Anis Haroon, Fareeda Shaheed and Khawar Mumtaz, many of whom head their own women’s rights NGOs, were made to sit on the tastefully decorated stage. The visual focus for the audience thus became the women sitting right in front of them, none of whom spoke. Those who did speak, did so from behind a dais squeezed into a corner, forcing attendees to crane their necks to get a full view of the speakers. This odd arrangement aside, the event benefited from the diversity of Lala’s own personality, flowing comfortably from feminism to music to art.

Urdu writer, Zahida Hina, stuck to well-worn clichés, but Subha Wijersiriwardena, a Sri Lankan feminist activist delivered a warm, earnest message via video focusing on the South Asian sisterhood. Ironically, she could not get a visa in time to attend the event live. Friend and colleague of Lala’s, Rubina Saigol, added a more personal flavour to the recollections: "Lala never bought a kite in her life, she only liked to fly the ones she had looted". Her meticulous attention to the details of Turkish coffee making, the rusting hanging bell at her door and the ritual taking off of shoes outside her house were dwelt upon by art gallery owner Umer Butt, who had flown from Dubai especially for the event.

Punjabi playwright and activist, Huma Safdar, recited a poem she had written especially for Lala. Its translation was recited by Lala’s sister Gul Rukh Rehman. The stark difference between the ponderously literary, almost obsolete Punjabi of her verses, and the halting, English-peppered language of her ordinary speech seemed liked an interesting insight into the embrace of Punjabi by local literary figures.

Sarah Zaman, a singer and feminist, raised the evening to another level with her rendition of Jalib’s poem ‘Ab deher mayn bae yaar-o-madadgaar naheen hum’, an anthem that WAF has used since the days of its inception. Sheema Kirmani ended the evening with a dance performance that Lala Rukh had choreographed for her.

The visual, musical and literary aspects of the evening were blended well, befitting not only the person celebrated but also serving as a fitting reminder of WAF’s achievements and the many remarkable women it has produced. But it did leave one thinking, who will take up the torch from these women? No young woman formed any part of the evening, except Sabah Husain, an artist (unconnected with WAF) and Maryam Rehman (Lala Rukh’s niece).

An evening for Lala Rukh