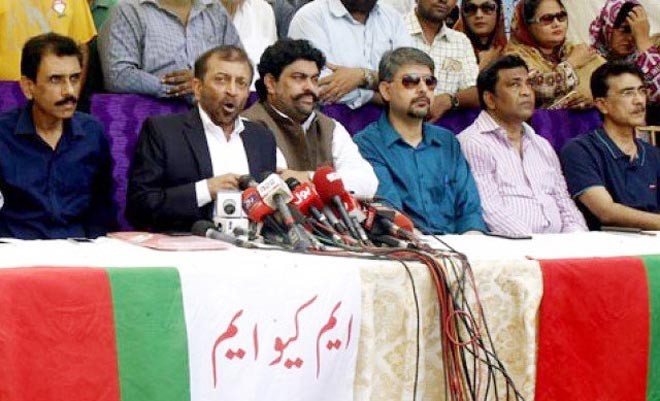 Pakistan’s fourth largest party is once again going through a tough phase. Already divided into four or so factions, this time it is literally fighting for its survival. The latest to part ways is Deputy Mayor of Karachi Metropolitan Corporation (KMC), Arshad Vohra who left MQM-Pakistan (MQM-P) and joined the bandwagon of Pak Sarzameen Party (PSP) on October 29.

Despite numerous assurances by the MQM-P of its ‘disconnect’ with London, the party has not yet been ‘cleared’. As expected, severe cracks have appeared in the party recently. It was first witnessed when its former female MPA, Irum Farooqui, posted a video on the social media citing strong grouping in the party. She had returned from the United States after several months and announced to join Pakistan Tehreek-e-Insaf (PTI) in August 2017. However, she immediately quit the PTI and approached her former party. Several key leaders including Member of National Assembly (MNA) Salman Mujahid opposed her return and posted a statement on the social media.

On October 20 this year, Mujahid was expelled from the MQM-P and his basic membership of the party was revoked. Salman Mujahid appeared on news channels and levelled allegations of serious differences within the party which were refuted by MQM-P head Dr Farooq Sattar.

Addressing a press conference on August 22 this year Dr Farooq Sattar said that their legislators are being coerced to join their rivals, and if this activity continues they will resign as MNAs, MPAs and senators.

There are reports that the recent friction among the MQM-P leaders appeared after Kamran Tessori, a gold trader, joined the party. Before joining the MQM-P, Tessori was with Pakistan Muslim League-Functional. He joined in February this year and, within eight months, was elevated to the post of Deputy Convener of the party, one of the top slots in the MQM-P hierarchy. According to inside sources, Tessori is a key player and a bridge between the party leadership and the military establishment. He is said to have been responsible for arranging several meetings among all stakeholders.

According to sources within the party, the organisation is visibly divided into two camps; one headed by Dr Farooq Sattar accompanied by Kanwar Naveed Jameel, Khawaja Sohail Mansoor, Waseem Akhtar, Dr Khalid Maqbool Siddiqui and Kamran Tessori. The other group is led by Amir Khan, senior Deputy Convener of MQM, having the support of Faisal Sabzwari and Khawaja Izhar-ul-Hasan, the opposition leader in Sindh Assembly.

Senior journalist Mazhar Abbas believes, "the party is operating for the first time in an environment where, despite several efforts, it is difficult to maintain secrecy, and decisions are being taken in Pakistan. That is why news is regularly appearing in the media about internal rifts".

Arshad Vohra’s departure is the latest setback for the Sattar-led MQM-P. During his presser on October 29, where he made an announcement of joining PSP, Vohra claimed, "Several members of local government are in contact with me and wanted to join PSP. But I asked them to wait and decide on their own". When questioned, Arshad Vohara conceded he had been under ‘pressure’ to join the PSP in the past. "Eight months back, there was huge pressure but now there is no such thing."

On October 29, Dr Sattar said that Arshad Vohra was worried after his name appeared in the FIR for money laundering. The FIR was lodged by Sarfraz Anwar Merchant last month on September 21 in the State Bank Circle of Federal Investigation Agency (FIA) Karachi. According to details, a case was registered against Altaf Hussain and his accomplices on charges of money laundering and terrorism financing. The other accused were MQM leaders Babar Ghauri, Arshad Vohra, Khawaja Sohail Mansoor (MNA), Khawaja Rehan Mansoor, Ahmed Ali (Senator) and four private companies. Vohra recently appeared before the investigation officer to record his statement.

MQM, the sole representative political outfit of Karachi, is in serious trouble since August 22, 2016 when the founder Altaf Hussain delivered an anti-state telephonic speech outside Karachi Press Club. In a massive crackdown, Law Enforcement Agencies (LEAs) sealed the party’s headquarter Nine Zero and arrested the senior leadership including Dr Farooq Sattar. On August 23, the deputy convener was released after which he held an important press conference at the Karachi Press Club and announced disassociation with MQM London and its founder.

Since the August 2016 speech of Altaf Hussain, several MPAs and other office bearers of MQM have joined PSP. Addressing a press conference on August 22 this year Dr Farooq Sattar said that their legislators are being coerced to join their rivals, and if this activity continues they will resign as MNAs, MPAs and senators. This is not the first time Dr Farooq Sattar has spoken about being sidelined without naming anyone.

Talking to TNS, a senior leader of MQM-Pakistan who doesn’t want to be named, revealed, "Right after the August 22 hate speech, the pressure started mounting on the party members to join Mustafa Kamal-led Pak Sarzameen Party. However, last year on August 22 we were ‘asked’ to merge the party in the PSP but we categorically rejected the idea." When asked why such pressures and hurdles are being created for MQM, he said, "They don’t want to allow MQM-Pakistan to operate as a political entity because ‘they’ believe it is associated with Altaf Hussain."

"The Farooq Sattar & Co wants all factions (MQM, Haqiqi, PSP) to contest the election from the platform of MQM with kite as their symbol because they believe the Urdu-speaking people have a romance with the name MQM and the symbol kite. But the establishment is pressurising them to fight the battle from the PSP platform", says Mazhar Abbas.

So far, Dr Farooq Sattar and his peers have been opposing all such options and operating under the MQM-Pakistan flag.

With the elections approaching, the election engineering in the mega city of Pakistan is in full swing. Despite criticism, it’s a fact that the PSP is attracting workers and leaders of MQM-Pakistan because it is providing them relief in criminal cases against them. There are several examples of that. The party is in hot waters and even struggling to open unit and sector offices, things it could easily do in the past.