A national policy for home-based workers in Pakistan will not only do good in the country, it will have a positive impact on the lives of over 50 million workers across South Asia 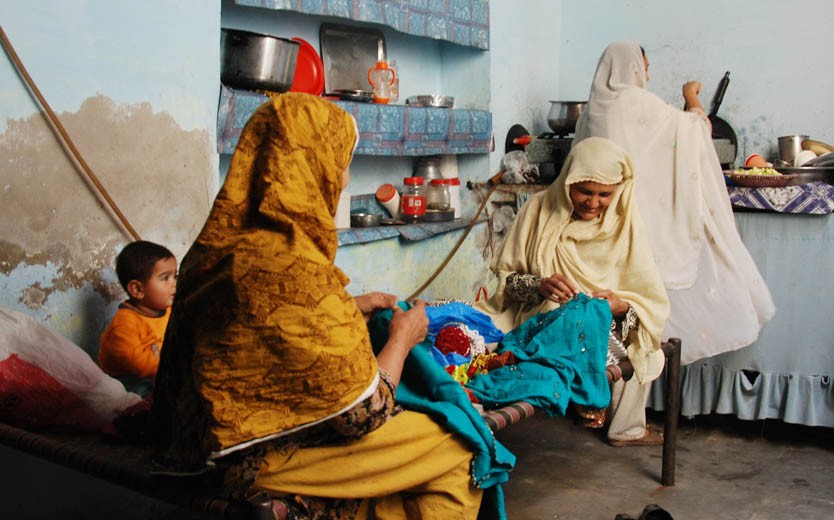 Last Eid was a time for grand celebrations in Lahore’s Gharishau settlement. At the centre of celebrations was long-time resident Asmat Kareem -- the heroine of the hour. Around eight years ago, Kareem had taken up home-based work to support her family of seven. Sourcing orders from middlemen that visited the locality, she spent her days stitching shalwars. For her labour, she only received Rs5 0r 6 for each piece. For a while, unaware of market prices and the value of her contribution to the product, Kareem delivered the orders unquestioningly.

But Lahore is a big city and prices were steadily on the rise. Kareem found that her earnings were no longer enough to meet her and her family’s living costs. "It became impossible to even have three filling meals on what I was making," she recalls. That’s when she decided to organise other home-based workers in the community and demand for better wages from the middlemen. By the time festival had arrived, Kareem had ensured that piece rates had risen to Rs10 for each shalwar.

No doubt this incident illustrates the sheer perseverance of women like Kareem. It also reminds us of the value of organising in the informal sector. But we also have to acknowledge that without the backing of a policy that ensures decent work, workers like Kareem are left to wage their own battles.

When it comes to home-based workers, it has to be noted that despite the borders that divide them, workers face similar issues in South Asia.

Currently, there are approximately around 12 million home-based workers in Pakistan. The informal sector makes up for 74 per cent of Pakistan’s workforce. In the recent past, this number has only increased and the home-based workerforce has grown at about 12 per cent per annum.

Home-based women workers, a major part of the economy who belongs to low-income urban localities, are amongst most exploited group of workers. They constitute major segment of labour in informal economy. As a workforce, HBWs have remained largely invisible. The intervention included enhancement of women capacities primarily, HBW to engage at community level development, monitoring, engagement through provision of information for enhancement of their social and economic status.

After a long period of advocacy and lobbying from home-based worker organisations, and other civil society organisations, Sindh became the first province in South Asia to approve a policy that recognised home-based workers and guaranteed their rights. This was in November 2016 and in the following year, the Punjab province did the same. While the policies have been accepted, the legislative bills are still to be passed by their respective assemblies. But workers and activists have been assured that this will happen sooner rather than later. These are significant achievements and home-based organisations are hoping that they can piggyback on these to bring into realisation a national policy that will ensure the rights of home-base workers across the country.

A national policy that guarantees decent work and the rights of workers will not just benefit over 12 million home-based workers like Asmat Kareem, but will also lead the way and push other South Asian countries to usher in change. "A policy indicates and articulates the intent of government which is why it is essential. Schemes and programmes alone will not ensure the rights of workers," says Firoza Mehrota, Strategy Adviser, HomeNet South Asia (HNSA).

When it comes to home-based workers, it has to be noted that despite the borders that divide them, workers face similar issues in South Asia. Across the region, home-based workers, a majority of them women, put in anywhere between six to twelve hours a day only to receive a meagre income at the end of the month. "Home-based workers contribute to expensive products that we see in shops from New York to Shanghai. But they are invisible. So, they remain very low paid and very insecure," reiterates Renana Jhabvala, Chairperson HNSA.

In Lahore’s Begampura, for example, Monnaza Ishaq, 40, received only Rs2 to 2.50 for each of the shalwars she stitched. That’s a shockingly low wage and it only increased to Rs10 last year after she and the home-based workers in her community pressurised the middlemen into renegotiating their income.

This is not an isolated case at all. In India’s Tirupur, a bustling South Indian town with a thriving garment industry, workers get paid as little as 50 paisa per piece for trimming work. The daily wages they make are well below the mandated minimum wages prescribed by the State. Similarly, in Nepal, a study showed that homeworkers in the knitting industry earned just NPR 70 for a cap that took three hours to complete. That’s about $0.66 for a product that requires a good degree of skill and knowledge.

Why should South Asian governments even ensure decent work? First, all South Asian governments have committed to working towards Sustainable Development Goal 2030. Of the 17 goals put forth, goal 8 urges governments to provide decent work to all of its citizens. The aim is to not just provide work but to ensure that earning citizens can free themselves and their families from the grips of poverty. Clearly, the cases of Asmat Kareem and Monnaza Ishaq illustrate that alleviation of poverty will not be possible given the current state of affairs.

Second, decent work is not just about workers meeting their expenses. If governments want to achieve economic growth, the definition of decent work must expand to include opportunities for innovation, skill development, and education. Considering that there are over 50 million home-based workers in the region, it will be imperative that governments invest in training and updating the skills of these workers.

Currently, government schemes in skilling are dime a dozen. But most of them fail to enable workers towards taking on the demands of increasingly competitive and globalised market. Also at this point it becomes important that the governments across south Asia adopts the formal definition of "informal economy" the ILO Recommendation 204, (adopted in 2015) stating that "All economic activities by workers and economic units that are - in law or in practice - not covered or insufficiently covered by formal arrangements." This would give coverage to the workers in the informal sector, including home based, to become legitimate part of the country’s economy.

Additionally, agendas of decent work should also urge corporate companies to do their bit. Global brands are simply reaping the rewards of the toil put in by unrecognised and invisible home-based workers with practically no investments. The onus needs to be placed on corporates to, first, acknowledge the presence of home-based workers in their supply chains and then to provide timely skill upgradation programmes.

Third, South Asian governments need to come together to commit to a common agenda when it comes to home-based workers. The presence of a policy that ensures rights and protection to workers in one country, in the region, and the absence of any such policy in other countries is very likely to encourage businesses to withdraw work and opportunities from the first and hop borders. Businesses looking to rake in profits without giving a second thought to workers’ rights can never be good news for an elected government.

HomeNet South Asia (HNSA), a network of home-based workers’ organisations that works in eight countries across the region, creates strategic partnerships that help workers and governments achieve decent work agenda. HNSA backs grass-root organisations, on the ground, and enables them to conceptualise and implement tailor-made learning programmes that improve the skill sets of home-based workers. Along with skill development, HNSA also encourages its membership-based organisations to strengthen workers’ voices so that they can insist on decent wages.

Simultaneously, HNSA also engages with governments and policy makers across South Asia to advocate for benefits of an inclusive economy. It pushes them to create programmes and initiatives that help home-based workers achieve increased productivity and better markets. But home-based workers can only achieve true economic independence when governments back them with sound policy. Till then, many workers like Asmat Kareem will be left to fend for themselves.