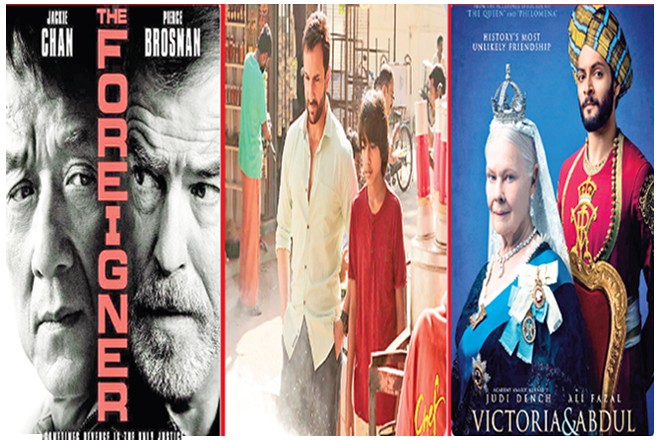 Some films are meant to entertain you while others are meant to provoke you; Martin Campbell’s latest film, The Foreigner, does both. The film, a revenge saga with an engrossing plot and a prolific ensemble cast, also has plenty of shock and awe moments. For example, Jackie Chan is seen essaying a villainous role, which comes as a strong surprise given his past choices. Then there is former James Bond star Pierce Brosnan, who stars as the target for having links with terrorists (that he doesn’t know anything about).

The Foreigner follows the story of Ngoc Minh Quan (Jackie Chan) who is a businessman on the outside and a warrior on the inside. When his last remaining daughter dies in a terrorist attack, he takes it upon himself to find the person responsible. He even goes to Ireland to meet Liam Hennessy (Pierce Brosnan) who is a former IRA member turned minister and when he doesn’t get the required answers, he goes all ‘Rambo’ on him, in his own way. Hennessy takes refuge at a farmhouse but loses his guards; his wife moves back to the city but her secret gets out as well and while Hennessy sends his ‘special forces’ trained nephew behind Quan, the Chinese ends up as the victor in every way.

Watching Jackie Chan take out bad men is always a welcome sight but when he goes into revenge mode, there is no stopping him. He is ruthless, he is searching for answers and he doesn’t care how many people die in his search of terrorists. Yes, the story resembles Taken as well as several other revenge-themed films but what makes The Foreigner so special is that both antagonist and protagonist are prolific stars such as Chan and Brosnan respectively. The film also marks a reunion of sorts between Brosnan and director Martin Campbell, who worked together on Goldeneye nearly 22 years ago.

Saif Ali Khan is an underrated actor. Though he has played caricatures of himself in a number of previous films, with Chef the Nawab of Bollywood is certainly pushing the envelope. Broadening his horizon as an actor, in Chef Khan essays someone who is not royalty and has to work for a living while parenting a kid who is entering the precarious teenage years. The film may be the official remake of Jon Faverau’s Chef but it has enough Indian elements to make it a likable venture on both sides of the border. For those who have seen the Hollywood flick, Chef follows roughly the same story. For those who haven’t experienced this modern day classic from Faverau, the Saif Ali Khan film has a lot to offer. Roshan Kalra (Saif Ali Khan) is made to return to India after fighting with customers in his friend’s restaurant. With the help of his ex-wife Radha (Padmapriya Janakiraman) and his friend Biju (Milind Soman), he sets up a restaurant on wheels where he gets to cook whatever he wants. He bonds with his son and makes his own father proud too, in his own way.

Saif Ali Khan and Padmapriya Janakiraman share excellent chemistry as ex-husband and ex-wife. They spend their lives as they should and raising their son is their top priority. Swar Kamble, who stars as Armaan does a good job as the son who comes from a broken family and doesn’t know which parent he should side with.

The film tackles many issues including following your passion, never quitting and helping friends but most importantly, it lets Saif Ali Khan excel as an actor. The film reminds us that when given the right material, Khan has the knack for pulling off all kinds of roles. Think Omkara, Hum Tum and now Chef can be added to that list.

He was an Indian manservant who was warned not to make eye contact with the Queen. She was the Empress of India who longed for respect and admiration. In Victoria and Abdul, the century-old story of a rare and unlikely friendship is brought back to life by the iconic Judi Dench and the remarkable Ali Fazal.

Stephen Frears’ film is based on Shrabani Basu’s book of the same name where the writer talks about the most hush-hush secret from Victorian England. While the Queen found solace in her manservant-turned-munshi’s company, her own family and staff were against it. How Abdul managed to stay in Her Majesty’s Service despite strong opposition from all quarters and why Queen Victoria found him to be different from the rest is what makes the film worth a watch.

Victoria and Abdul isn’t about two characters though. It is also about a time and place in history that hits close to home and has various elements to it. For instance, the film highlights the hypocrisy of the British Monarchy where the Queen, when told of dire consequences, delivers a fiery monologue.

While Judi Dench has played Queen Victoria on screen before, the film serves as a big break for Bollywood actor Ali Fazal – who had a cameo in Fast 7 and has appeared in other TV productions.

Throughout the course of the film, both actors complement each other with faultless performances as if they were born to play these roles. The director must be commended for adding authenticity to every frame as nothing looks out of order. In fact, the costumes from the film have been made a part of the official display at the Osborne House, Queen Victoria’s residence.