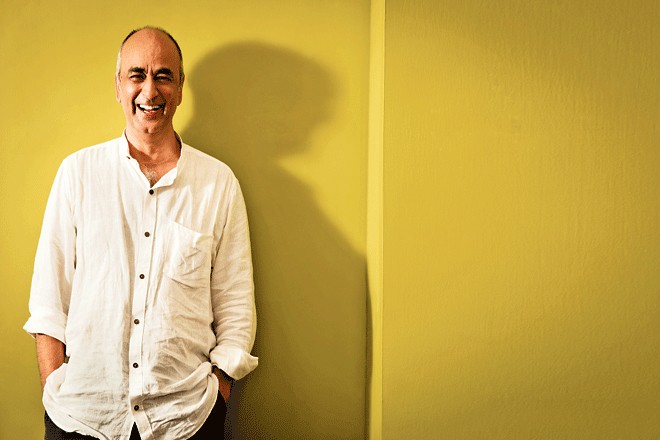 You know what I would love to do?" asked Ather Malik, more commonly known as Art in Hollywood, while we waited for our photographer to set up his frame. The actor was in town to work for a charitable organization, Layton Rahmatulla Benevolent Trust (LRBT), which provides free eye care to millions across Pakistan. It’s also the same charity that his father spent his last years working for. "I would love to one day visit Bahawalpur," he shared nostalgia for a home that he doesn’t even remember.

How could he, seeing that he was only three years old when his late father took him and the rest of the family from Bahawalpur to England in a bid to become a surgeon. By the time his father had achieved this goal, he had found himself with children who had grown up to become "little Englanders".

"It was very difficult to go back to our roots then. I mean, my father tried; I was sent to boarding school in Quetta for about a year. I really quite enjoyed it there; it was a splendid place to be. But my mother wanted her children back." And that was that.

Art did visit Pakistan occasionally, once for the shooting of a film. "I’ve filmed here in Pakistan, I did a British film. Both my Bollywood films were shot in India, Bhaag Milkha Bhaag and Mirzya. I chose the latter film purely because Mirza Ghalib was my father’s favourite poet," replied Art, reflecting on his attempts to connect with his father and his interests. "I was asked to be in Homeland as well. I couldn’t do too many episodes because I was doing this film," he smiled, albeit a little sadly.

The film didn’t do well in India, which Art is embarrassed about but he also wonders about its failure. "I thought Mirzya was a splendid, beautifully shot film. But it didn’t do very well in India. I think that has to do with what is required of films there."

As much as Art has tried to connect with Pakistan, he simply cannot. But one wonders if he ever finds himself identifying as a Pakistani? "Well, I mean I take responsibility for being British and for everything that the British have done in the past and continue to do in the present. I take great delight in things that are good and proper, and I’m embarrassed about the things that we don’t get right, such as our foreign policy, for instance.

"But to answer your question, no I’m not Pakistani. I’ve been asked many times to answer for Pakistan and my answer to that is that I am not qualified to answer that question. Pakistan has a 70-year history, which I am unaware of. But it’s a subject that comes up a lot. There isn’t a ceremony that you can go to without people talking about what should happen in Pakistan. I feel that’s very ingenuous really because if you think things can change that easily in Pakistan, then come here and try."

But as much as he identifies with his British identity, he is refreshingly critical of it as well. "Growing up in England was absolutely terrible. There was physical and verbal violence. Being called a Paki was not a badge of honour you were being given; it was a derogatory term. But you just muster along. When I look at people who are racist, I just think that they’re lazy. The level of racism is simply becoming worse. We’re doing it with Brexit and the Americans have done it by democratically electing a white supremacist."

The very fact that Art had to shorten his name for the convenience of others further sheds light on how his childhood must have been difficult. "I had to shorten Ather to Art because people couldn’t pronounce Ather. My response to that was looking at a Stevens or an Andrews and saying, but what makes you think your name is easy for me to pronounce, but try, please. There were a few that would try to say Ather but they would turn it into Arthur. There was also the residue of the fact we were an occupied country and we had only recently gotten independence. There was still this feeling amongst the Brits that I was growing up with, that somehow they were superior."

Art further reiterated something every Pakistani, or Indian, realizes at this point. "I think one of the great damages of empirical conquests is that you damage the people you conquer, and you damage their self esteem. My father’s generation is made up of people who were eminently successful and brilliant at what they do, but there is something inside that is damaged. And I don’t think you can walk away after 200 years and say that you haven’t damaged the people, especially the way the independence was handed out. I apologize, for Britain, as a British taxpayer. It’s a tragedy," he lamented.

Does he feel that British entertainment explores this reality of British rule? "Not yet. But it will because now there is a generation of British filmmakers who have a connection with the subcontinent and they’re exploring it. My success came from films like Jewel in the Crown, which were written by Brits who were apologizing for what had been done in their name. Now we just need to readdress the narrative."

On the other hand, Art has done a film like True Lies as well; a film that would today be considered untouchable for perpetuating stereotypes. Would he ever do such a film again? "No, it was pre 9/11. There was nothing in there to suggest that we were about to launch into the two decades of horror that we have. No, I wouldn’t do that again. We were going to do a True Lies 2; I was going to come back as my wicked brother. But after 9/11, the director realized that we shouldn’t do a second part."

What Art considers more significant about films and stories about 9/11 though is this: why did they do it? "We hear stories of the victims, of the witnesses of that horrific incident. My question is who were these 22 Saudis? Do you remember any of their names? Do you know why they did what they did?" questioned Art thoughtfully.

Why has this point of view rarely been explored? "I think it has something to do with the idea that you were an empirical power and such a power never, ever does anything other than blame the victim for what they are doing to "us". Indians were to be blamed for what they did to the British for not allowing them to stay on, for instance. Americans find it very difficult to come to terms with the fact that their foreign policies might actually have something to do with what happened on September 11. This is the common opinion of a lot of my American friends but somehow a liberal thought is deemed unpatriotic in today’s day and age."

It’s 2017 and many names and faces are coming forward who are trying to break these stereotypes. Some names very relevant for this side of the subcontinent are Riz Ahmed (who also has shortened his name from Rizwan to Riz) and Kumail Nanjiani who are both attempting to portray roles that try to show what it’s like for a Muslim or a Pakistani to stand neck in neck with the rest of the world. Art agrees with us in this that things seem to be looking up.

"I think it’s about who makes the films, whose point of view are you telling. Sadly, one would find it very difficult to find someone in Los Angeles who would want to tell the story from somewhere else. But making movies now is a much easier process. A lot of people are shooting their movies in their DSLR cameras," he shared optimistically.

At the end of it all, Art left us with a very pertinent thought that is relevant for nearly every oppressed and marginalized community in the world. "I think it’s important for people to tell their story. If you have a story, just go out there and tell it somehow. And if somebody doesn’t like it, so what?"