Laws in a vacuum 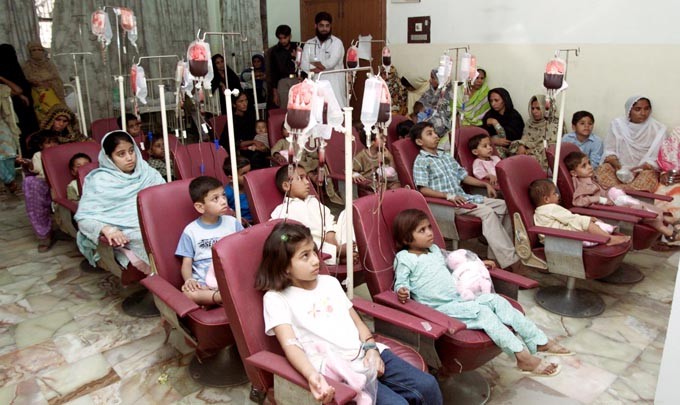 Eleven-year-old Afifa Wajahat Ayaz was diagnosed with thalassaemia Major when she was three. And, to make matters worse, she had a rare blood group -- Hh, also known as Oh or the Bombay blood group.

She needs blood transfusion at least once a month.

There are 15 people in Pakistan who have this rare blood group and only six are capable donors. Out of six donors, four live in Karachi, while one each in Multan and Rawalpindi.

"It is often that Afifa travels more than 2,000km for blood transfusion," Wajahat Ayaz, father of Afifa, tells The News on Sunday.

Apart from local donors, two brothers who now live in the US, donate blood to her. They fly from the US once a year.

"If my wife and I had gone for pre-marital test for thalassaemia confirmation, things would have been different," laments Wajahat, who is married to his counsin. They are both thalassaemia Minor.

Dr Rahat, a Karachi-based haematologist, says, "It is advised that people getting married should take a simple blood test and ensure that both the partners are not carrying the thalassaemia trait".

According to experts, bone marrow transplant is the only cure available for thalassaemia with 80 per cent chance of recovery if the disease is diagnosed in an early stage.

Afifa is among more than 100,000 thalassaemia patients in Pakistan. Every year 5,000 children are born with the disease. In Karachi alone, around 1,000 new cases of thalassaemia are reported every year.

In 2014, the provincial government passed the Sindh Prevention and Control of Thalassaemia Act, 2013. A notification issued this month, four years after the Singh Assembly passed the Act, makes it mandatory on the bride and groom to produce a written declaration before nikkah khawan to prove that they do not carry the thalassaemia traits.

Though the bill is already passed by the Sindh Assembly and the thalassaemia-free certificate before marriage has become mandatory, the Sindh healthcare system is not equipped to conduct the medical tests for thalassaemia. The blood screening kits required at district, tehsil and town levels for pre-marriage tests are missing. To compensate for this, the government must arrange for mobile units to travel to these far off areas.

Senator Haseeb Khan, who was instrumental in framing the first-ever draft policy for thalassaemia on national as well as provincial level in Sindh, thinks a lot of work is still required to implement the law. "There is no blood screening laboratory at district level in Sindh. The government cannot implement the law through mere lip service. It has to practically do things. It’s already very late."

According to Khan, the government needs to pay special attention to creating awareness. "A majority of people is unaware of how to prevent it. Those who are aware think it’s odd to go for a test."

Some experts suspect that such shortcomings may encourage corruption. "If the law is implemented in the absence of proper blood screening facilities for brides- and grooms-to-be, there are chances of issuing fake thalassaemia-free certificates, without conducting the tests," says Dr Adnan Majeed Khan, Regional Director Pakistan Bait-ul-Mal Sindh.

Thalassaemia is a blood disease that affects a person’s ability to produce haemoglobin, thus causing anemia. The disease is passed on to children by parents who carry the mutated thalassaemia gene. A child who inherits one mutated gene is a carrier of the ‘thalassaemia trait’.

The more severe form of the disease is thalassaemia major, also called Cooley’s Anemia. It is a serious disease that requires regular blood transfusions and extensive medical care. If two people carrying the thalassaemia trait get married, there is a 25 per cent chance that their children will inherit the disease.

Persons affected with thalassaemia seldom live beyond age 40. Their lives are continuously dependent on blood transfusions and medication. Permanent cures like stem cell transplants are expensive and risky.

Despite the high rise of thalassaemia in Pakistan, a prevention and control programme is nowhere in sight. Major burden of blood transfusion and medication is carried by non-government organisations. Most of the blood is collected from educational institutes by NGOs.

The National Assembly in February this year passed the Compulsory Blood Test of the Relatives of Thalassaemia Patient Bill, 2017. Under this bill, all clinics, hospitals and centres, notified by the government for handling and treating thalassaemia patients, shall ensure that blood relatives of children with the disease are screened or referred to centres having requisite facility for screening.

Although Dr Azra Fazal Pechuho of PPP piloted the bill in the National Assembly, she has not been able to implement the Sindh-version of a similar bill passed in 2014 in the PPP-ruled Sindh.

Khyber Pakhtunkhwa Assembly introduced the bill in 2009 but it is still pending. Mian Atiq-ur-Rehman, Vice President Thalassaemia Federation of Pakistan, who is also founder of Welfare Hand Organisation in Peshawar, thinks the bill is pending due to unsettled issues pertaining to stigmas, family marriages and unavailability of blood screening facilities.

Meanwhile, he says, "the KP government has taken various steps to prevent the spread of this disease. In Peshawar, it has started registering thalassaemia patients in major hospitals where patients are provided blood without exchange. The government is also providing thalassaemia medication free of cost."

According to experts, bone marrow transplant is the only cure available for thalassaemia with 80 per cent chance of recovery if the disease is diagnosed in an early stage. But this form of treatment costs Rs3 million, which makes it unaffordable for many patients.

Therefore, the prevention of thalassaemia is vital. "A similar law was introduced in Iran some years ago, and today it is thalassaemia free," says Dr Rahat.

Laws in a vacuum