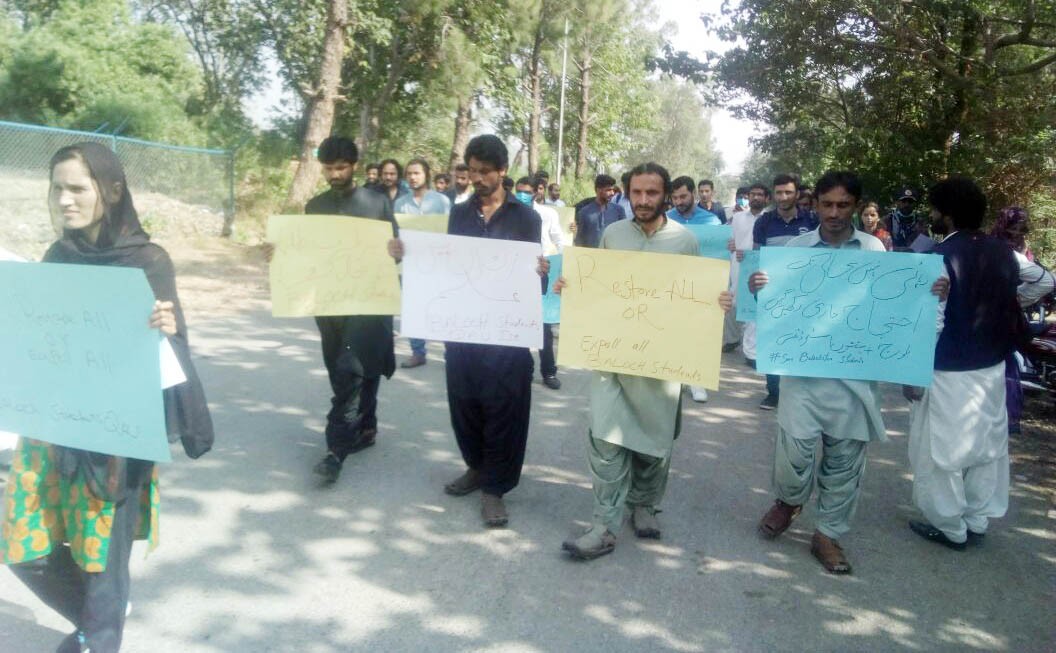 Partial normalcy returned to Quaid-i-Azam University (QAU) in the middle of last week. On Monday, October 23, Islamabad Police had arrested 70 students of the university. The students were protesting for the restoration of their expelled comrades.

The recent troubles began on October 4 when students from six student councils went on strike disallowing the university from holding regular classes. For two weeks the campus wore a deserted look. But last week, after the 70 students were arrested on Monday and then released by Wednesday, the university was again teeming with anxious students, hurrying towards their classrooms.

Over a dozen cops were still deployed close to Bab-e-Quaid gate but the previous heavy contingent of law enforcers had been withdrawn. Students could be spotted eating snacks at the khokas once again.

Despite the return of the arrested students, a silence surrounded the campus, which was broken around 1pm on Wednesday, October 25, by vociferous slogans of protesting students. The protests had begun again, despite the heavy handedness of police and law enforcers on Monday. Around 150 students, most of them Baloch, were holding placards and raising slogans against the Vice chancellor and police; they marched through various departments, staging a demonstration outside the barrier close to Bab-ul-Quaid gate. As time passed, the crowd swelled. The students were demanding restoration of their comrades, an end to police atrocities and justice.

The protests of students triggered a wave of sympathy. National Party, Awami Worker Party and Awami Jamhoori Mahaz held demonstrations across the country to show solidarity.

Several sources told The News on Sunday (TNS) that the university witnessed three unpleasant incidents this year. First, there was a clash between the Sindhi and Pashtun students early this year. Next, the Islami Jamiat-e-Talaba (IJT) tried to establish its units there in the guise of holding a religious event, which was fiercely resisted by students’ council, thwarting IJT’s chance to get a foothold on the campus. But the month of May proved to be lethal: Baloch and Sindhi students quarrelled over a petty issue that escalated into a clash, resulting in police intervention.

After that clash in May the university punished over 40 students by imposing fines, rustications and expulsion of eight students -- two Baloch and six Sindhi.

On October 4, the students went on a strike which lasted for over 15 days. Before going on strike, six students’ council had put forward 13 demands. After a lull of 15 days, according to some reports, the university accepted 12 of them. The accepted demands included the withdrawal of an increase in fee, bringing it to what it was in 2015, improve hostel conditions, increase facilities for various departments except for restoration of the Baloch and Sindhi students.

On the acceptance of most of the demands, five out of six student councils called off the protest on Friday, October 20, but the Baloch Students’ Council backed by their Pashtun comrades remained determined to continue the protest. Their concern was the one demand that was left unmet: they wanted restoration of the students expelled for their involvement in a clash on the campus in May this year.

The syndicate meeting held on October 20 decided to form a committee to review this decision of expulsion. This has divided the student community with many saying, "wait for the review" but the Baloch insisting on continuing the protest. The Baloch students say that since the syndicate has said the expulsions will not be reversed, they must protest instead of waiting.

"During the syndicate meeting, a majority of the participants opposed the restoration of the expelled students fearing it would encourage hooliganism and vandalism and after the recent incidents of violence and vandalism on campus where students hurled abuses at faculty members, thrashed a PhD student and broke the CCTV cameras of Physics department, the students’ councils lost all sympathies. It is difficult for the university to restore the expelled students now. On this issue the university and teachers stand united," says a faculty member, requesting anonymity.

The students on the contrary claim that the university administration has launched a smear campaign against them.

Khan Zaman, a PhD scholar says, "The university is following the policy of criminalisation. They accuse students of taking drugs and of being involved in other criminal activities. The administration is also following the policy of Talibanisation and victimisation of students. They are banning music, annual fun fair and cultural programmes. The QAU is comparatively more open than other public sector universities where students discuss various topics and these measures are meant to stifle our voices and prevent us from engaging in healthy debates and talks."

He accused Dr Javed Ashraf, Vice Chancellor of the university, of turning the educational institution into a commercial entity.

"The Vice Chancellor has openly asked poor students not to join QAU. He is turning it into a commercial concern. The fees have skyrocketed in the last few years. According to rules, they can only carry out a five per cent increase in the fee but in 2015 they increased the fee by 20 per cent. When we protested, they promised not to increase it for the next four years but in 2016, they again made an increase of around 5 per cent and 11 per cent this year. It is close to 40 per cent increase in the last few years. Now the administration just wants to withdraw the increase that they made this year."

Like other public sector educational institutions, Quaid-i-Azam University does not allow student unions on campus. There are several student councils, most of them ethnic in nature but all apolitical. Commenting on these councils, Mushtaq Gaadi of the Department of Pakistan Studies says, "They have been there since early 1990s, serving the students of their own areas and regions, helping them with admission and other issues besides holding cultural events."

Senator Usman Kakar of Pakhtunkhwa Milli Awami Party strongly supports the demands of students. "The children of Chief of Army Staff Qamar Bajwa, Zardari, Nawaz and other politicians do not study there," he says. "It is the poor students from the country’s periphery who come here to study but now its fees have skyrocketed besides the university is imposing so many restrictions as if it is not an academic institution but the emirates of Taliban. The students were protesting against this exponential rise in fee and the restrictions that the university administration is imposing. The state responded with sledgehammer tactics. They arrested more than 100 students -- almost all of them Baloch or Pashtun, accusing them of boycotting the classes but thousands of students took part in the boycott. The Sindhis, the Punjabis and students of other nationalities also took part in the boycott but only Baloch and Pakhtun students were arrested. Why?"

He laments that no politician visited these students and showed solidarity with them. "We must remember that the Quaid-i-Azam University like the Senate of Pakistan is the symbol of federation because it attracts students of all nationalities from all over the country. By increasing fee, the administration is depriving the students from less developed areas of the country. Most of them are Baloch and Pashtun. They are closing the doors of education on us," he says.

Aliya Amirali, a lecturer in the Gender Studies department, Quaid-i-Azam University, also believes the rise in fee is a big issue. "Naturally, the students who cannot afford the fee of private universities come to study at a public university. If you keep on increasing the fee, then it will be hard for poor students to get higher education."

The Vice Chancellor of the University, Dr Javed Ashraf, rejects these allegations and sees a conspiracy behind these protests.

"In 2015 we promised not to increase the fee for existing students for four years. The fee was increased according to the rules but was withdrawn after the protests of the students. It stays the same not only for existing students but for new entrants as well. The fee issue is just a cover. The real bone of contention is the demand related to the restoration of expelled students," he says.

"Last Thursday [on October 19] students’ representatives were sitting with me and the deputy commissioner. They admitted that the university had accepted their major demands, holding out assurances to us that they would accept the decision of the syndicate which is the highest body. The syndicate refused to restore the expelled students, saying it would encourage vandalism. The academic staff threatened that if the expelled students were restored, they would go on strike. The decision of the expulsion was also backed by the education minister.

"Now, these students say the university is wasting the precious educational career of the expelled students. Should we allow violence on campus? Should we ignore their vandalism? No, that is not possible. During the recent strike they misbehaved with teachers, broke the CCTV cameras and damaged a car of the staff member. They have lost whatever sympathy they might have had," says the VC.

Other staffers also complain. "First the university’s Disciplinary Committee expelled these students and then the syndicate, which is the highest body of the university, backed their decision," says Jamil Aslam, a Physics professor.

Bemoaning the trend of rising fee, he says, "The university is told that it should generate its own resources. I think universities are not factories. If fees are increased, then facilities should improve."

The deadlock is likely to continue despite the fact that classes are back on. A member of Baloch Students Council, who wished not to be named, says that his comrades would continue their protest until the university takes back the eight expelled students.

"They are innocent. The clash in May this year occurred because of the indifference of the administration. When the clash erupted, the cops on duty did nothing to stop it. These students were punished for no reason. Their future is at risk. One of them is in the fifth semester of M.Phil and another is in the fourth semester of Bachelors. Both are Baloch and we cannot allow this issue to remain unresolved. We shall continue our struggle until their restoration."

The vice president of the Baloch Students Council refutes the claims of the VC regarding withdrawal of increase in fee. "They have not reversed their decision. No notification has been issued yet. They just want to turn the university into a commercial entity. They made promises earlier but never kept them. We need at least 50 buses but only 32 are functional and they too are in a shambles. The conditions at the hostel are miserable," he says.

The vice chancellor admits there are problems in the university but insists the largest university of the federal capital is trying its best. "We will get Rs2.8 billion out of which Rs15 million will be spent on the improvement of hostels and its facilities and Rs16 million will be spent on purchasing buses. I requested the Higher Education Commission (HEC) for Rs5 million for miscellaneous expenses which was also granted."

The protests of students triggered a wave of sympathy. National Party, Awami Worker Party and Awami Jamhoori Mahaz held demonstrations across the country to show solidarity.

By and large the teachers’ associations of the country remained tight-lipped over this important issue except the faculty of Gender Studies of the QAU and a few individual teachers in various parts of the country who have issued a strongly worded statement.

Ammar Ali Jan, a lecturer at the Government College University, also condemned the high-handedness of the state, bemoaning the indifference of academic staff. "Teachers should have at least supported the state repression. If they do not stand with their students today, can they expect them to side with teachers’ community if they run into any trouble with the state. Quaid-i-Azam University attracts students from remote areas of the country. The state has an opportunity to integrate them but instead it used force which reinforces their regional identities."

All the arrested students have been released but the protest is not likely to be over any time soon.