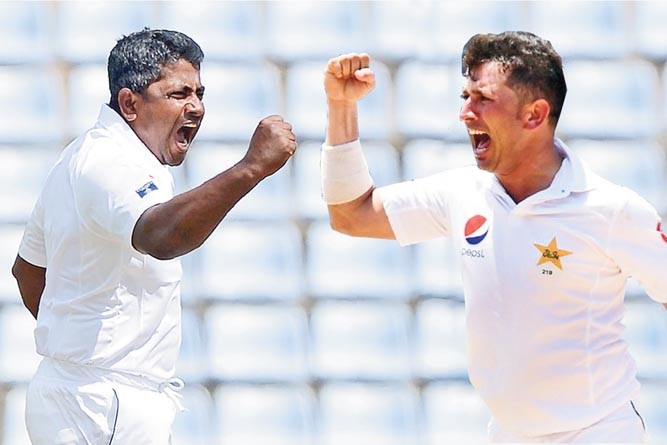 During this period, only India and Pakistan produced quality spinners who won matches for their teams.

But since 1990s, spinners have been dominating the world of cricket. Some spinners will always be remembered for their extraordinary performances for a long period in international cricket.

Yasir took 16 wickets, averaging 25.15. With a five-wicket haul in the first innings of the second Test, Yasir became the first spinner and overall fourth bowler ever to take five wickets in five successive Tests.

Yasir is also the quickest spinner in Test cricket history to have taken 150 wickets -- he did it in only his 27th Test. He surpassed former Australian spinner Clarrie Grimmett who had achieved the landmark in his 28th match.

Overall, he is the joint-second fastest bowler ever to take 150 wickets along with former Pakistan captain Waqar Younis, who also took 27 matches to get 150 wickets.

Yasir is also the fastest Asian and overall joint-second fastest bowler to reach 100 wickets. He did so in his 17th match. He was the fastest Pakistani bowler as well to reach 50 Test wickets. He did that in his 9th Test, beating Waqar, Shabbir Ahmed and Mohammad Asif, who took 10 Tests each.

In July last year, after the match-winning performance against England at Lord’s where he took 10-141 to give Pakistan a 75-run victory, Yasir jumped to the first position in the ICC Test bowlers’ ranking. Warne was the last wrist spinner to reach the number-one position, in December 2005.

Currently, Yasir is Pakistan’s number one spinner, having replaced Ajmal who was suspended from bowling after his action was declared illegal in September 2014.

Yasir, now 31, made his Test debut against Australia in Dubai in 2014. He made everyone forget they were supposed to miss Ajmal, spinning his way to 12 wickets in his debut series at an average of just over 17, as Pakistan whitewashed Australia 2-0.

In One-day Internationals, Yasir is not as successful as in Tests. In 17 ODI appearances, he has taken only 18 wickets with a high average of 42.55. In the two Twenty20 Internationals he has played, he failed to take any wicket.

Herath is widely considered one of the finest left-arm spinners in the history of cricket. In the Test series against Pakistan, Herath also took 16 wickets, averaging 17.31. In the first Test in Abu Dhabi, his match-winning performance of 11-136 gave his team an incredible win.

About his incredible success against Pakistan, Herath said: "I have no idea, maybe I have played more against them, that’s why. I am so happy with the achievement."

Herath took his 400th Test wicket in his 84th Test. Only Muralitharan (72), Hadlee (80) and Dale Steyn (80) have done it in fewer matches. He’s the first left-arm spinner, 14th bowler overall and second for Sri Lanka to take 400 wickets.