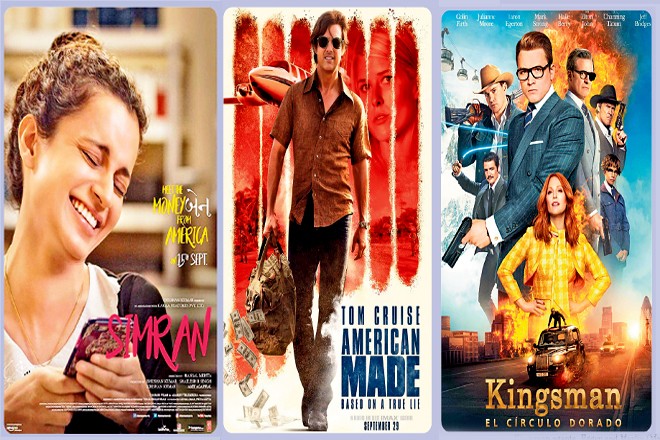 Kangana Ranaut is undoubtedly a wonderful actress - maybe the best in the current Bollywood crop - but that doesn’t mean that she can get away with everything. In Simran, she tries to go back the Queen way but falls flat because the film lacks emotions and is more like a hurried attempt to filmmaking than a thoughtful one. Add the controversy about writing credits with Apurva Asrani and you get a movie where everything goes wrong, despite the presence of a talented star!

Simran is inspired from the story of an Indian - American Sandeep Kaur – who was convicted of robbing four banks in the States. A young divorcee Praful Patel (Kangana Ranaut) gets addicted to gambling and stealing when she loses her money in a trip to a casino. Her dream to buy her own place is shattered when she gets involved with the mafia and in order to pay them back, she starts robbing banks. Her parents, friends and in-laws-to-be have no idea about her adventures but she loves the way things move forward. Does she manage to pay back the mafia or does she get caught, that’s for you to find out. However, it will not be an interesting trip to the cinema because the film has no unique selling point.

Simran pulls a Revolver Rani in Kangana’s successful career. This is the fourth flop film Kangana has delivered after Tanu Weds Manu 2 and if Kangana doesn’t choose her films carefully, she may lose her popularity as an actor with substance. She plays the most stupid of 31-year olds in America who have no idea about loan sharks, who still carries her native accent and has no idea how things work in the real world. Director Hansal Mehta is also to be blamed, for the narrative may be quick-paced but doesn’t make much sense; he shouldn’t have given in to Kangana’s demands including sharing writing credit because stars might rob banks on screen, they don’t rob others of their credits.

Who would you want to cast in a film if you wanted to show the life of a former TWA pilot turned drug smuggler turned Spy. Tom Cruise, who else! He excels as a pilot, a drug smuggler and a Spy in Doug Liman’s American Made where he portrays Barry Seal, the real-life person who played all sides during his rise and fall in the narcotics business. To make a film on a real person is always a difficult job and the director must be commended for going back in the 70s to show the world that things weren’t simple even then.

The film has all the ingredients required to intrigue the audience of today; there is the Pablo Escobar connection (for Narcos fans), Tom Cruise flying planes (for Top Gun enthusiasts) and a story that involves the CIA, the DEA, the White House and of course, Latin America. Tom plays Barry Seal who quit his job as an airline pilot to help the CIA gain the upper hand for the sake of national security but his job description kept changing from delivering weapons to the Contras to bringing them to America. Latin American smugglers enrolled his services for drug trafficking using his super-plane for their convenience. He made so much money that it literally overflowed in his house and that’s when things begin to go South. How the American President and the DEA get involved in all this is one of the many reasons you should watch the film.

It is a Tom Cruise film from the first frame until the last; after the disappointing The Mummy, he was desperate for a hit and this film provided him just that. The narrative moves at a fast pace and keeps the audience interested in the life of a man who bought banks to store money. The rest of the cast just moves around his character; for those interested in American history, this film is nothing short of a goldmine.

Kingsman - The Golden Circle is not just another Hollywood film sequel that gets better or worse as the franchise progresses. It keeps you engrossed through witty dialogues, energetic action sequences and end-of-the-world conspiracies where the whole world depends on one thing; add the ensemble cast and you have a film that nobody should miss.

Kingsman - The Golden Circle revolves around the life of Eggsy (Taron Egerton) who wants to settle down; however, when drug lord Poppy (Julianne Moore) destroys all but two Kingsman agents, Eggsy and Merlin (Mark Strong) join hands with their American cousins to take her down. While they make new friends, they also welcome the return of Galahad (Colin Firth) who was shot down in the previous flick. Do the agents manage to save the world from a virus that spreads through drug use or does Poppy manage to get a law drafted to make drug use legal, the answer lies with this Kingsman.

The film caters to the old and new audience alike - the robotic guard dogs might seem fancy to the young, while the old would love the décor of Poppy’s hideout. The action sequences, however, will appeal to all and that’s the USP of the flick. On acting abilities, Kingsman - The Golden Circle belongs to Taron Egerton who has grown into the character well, considering he wasn’t supposed to be a Kingsman in the first place. With four Oscar winners - Halle Berry, Jeff Bridges, Julianne Moore and Colin Firth - in supporting roles, he had huge shoes to fill in, which he did well. Channing Tatum doesn’t have a big role here but he might in the next one. Stay tuned!