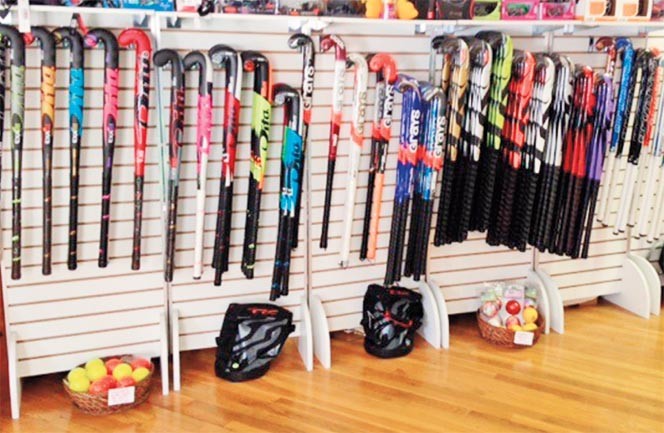 "There was a time when I used to sell a dozen hockey sticks and almost as many balls every other day. What used to be my daily average sale of hockey accessories is now almost my monthly average sale. Moreover, hockey sticks are now normally bought to serve as crutches," says Arshad Nazeer, who runs a sports goods shop Nazeer Sports at Kashmir Road in Karachi. There are several grounds near this shop, including KMC Sports Complex.

"I don’t know why people think that hockey sticks are cheaper than crutches and they go for hockey sticks to support them," says Arshad. "May be they feel better with a hockey stick in hand as compared to crutches," he added.

With the advent of computers and now mobile phones, sports activities have gone down in the city. There may be other reasons. Inflation for instance since people may not be having enough leisure for recreational activities. The opportunity cost of playing sports has risen greatly.

"There was a time when I used to sell a dozen cans of Dunlop ball every day. Each can contains three balls. Now its sale has gone down to a dozen can a month. I used to sell four to five hard balls for cricket and more than a dozen tennis balls used for playing tape ball cricket every day. I don’t think I have sold a single hard ball in the last month," says Arshad, who has been running the shop since 1970.

According to Arshad, the sale of sports goods declined soon after 80’s and he holds the opinion that 90’s saw surge in political activism in the city, at the cost of healthy activities.

He also has a very curious case to tell. Three years back, one of his acquaintances, who was accompanied by around five German nationals, came to his shop and asked him for an international standard hockey stick that costs around twenty thousand Pakistan rupees or around US$ 200.

"I didn’t have one and I told him about five merchants who could provide him with one. But he told me that he has already taken these tourists there and I was their last hope. After learning that I also didn’t have a quality hockey stick, the German, who was asked by his friend back home to bring a hockey stick from Pakistan on his return, joked that his friends won’t believe him and would think he was lying."

Unable to find a high quality hockey stick in the sports market of Karachi, it was unbelievable for the visiting Germans but it has become a harsh reality for us now. The lack of availability of accessories means that the game has almost been abandoned.

Arshad was not sure of the dates when this peculiar incident happened. It may have happened some time after Pakistan played Germany in the final of Champions Trophy in 2014 in Bhubaneswar, India.

Buying or using accessories of international standard doesn’t necessarily imply that a person has aspired to become an international player. Even fans try to have their hand on accessories that have been used by star players. Models of a certain brand of shoes or t-shirts that have been used by Lionel Messi or Christiano Ronaldo during matches are things that many football fans want to possess.

Karachi was once considered one of the powerhouse of hockey in the country. Pakistan has the most illustrious past in the game of hockey, which we call our national sport. Karachi was never behind in producing hockey legends for the country. There was Islahuddin Siddiqui, Hasan Sardar, Samiullah, and recently Sohail Abbas.

Shahbaz Ahmed, one of the best hockey players Pakistan has ever produced and who happens to be the incumbent secretary of Pakistan Hockey Federation (PHF), has said that lack of jobs has been a major reason for the downward trend of hockey in the country.

The high quality hockey sticks have literally vanished from the markets of Karachi because of negligible demand. If someone is adamant to possess a hockey stick, then that person has to acquire it from Sialkot or ask some acquaintance, who might be going to Sialkot or some other city like Lahore, where hockey is still alive.

"It’s expensive because it is made of fiber glass. Its material is expensive. But several other low-price hockey sticks are available in the market, which are generally used to play hockey," says chief selector Hasan Sardar, one of the greatest hockey players.