It was all sugar and spice 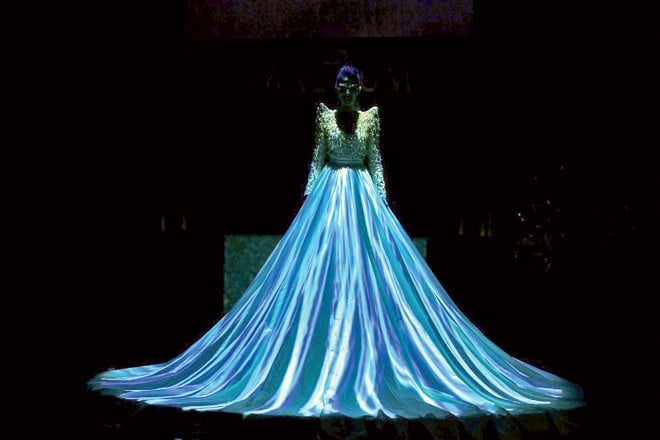 Is it even worth it? That is the question we ask ourselves every time there’s an invitation to an event, especially when there’s a corporate angle to it. There are far too many humdrum launches and fashionable high teas passed off as exhibitions happening these days, which claim to bring out the best but end up being sore disappointments. Fashion does exist in a spin cycle - design, showcase, retail and repeat - which threatens to get monotonous and utilitarian but then that’s exactly why designers (especially in Pakistan) need to participate and indulge in activities that allow them freedom of expression without necessarily worrying about commercial feasibility.

Let’s be honest; creativity that thrills and jogs you out of your stupor is generally lost when one has to design collections months ahead of a season, keep up with fashion week commitments and focus on retail success. Internationally designers still have the advantage of getting creative with their show space (although they still have to meet deadlines). Their massive budgets allow them to blend commercial success with creativity but in Pakistan it takes a gargantuan effort to think beyond showing with the country’s two fashion councils. Although the solo show trend has taken off in a big way, with Elan going solo and Sana Safinaz and Shamaeel doing so within the FPW calendar recently, it’s still only the few at the top who can afford the massive budgets or have the social pull to attract the right crowd. It’s hard to step away from the said cycle and create, the way artists should. More significant is the fact that the average fashion buyer in Pakistan is a conformist and mostly conservative so there is very little room for creativity to flourish on a mass scale. That’s where events like the annual Magnum Party come in.

Magnum, who have been consistently trying to put together an evening of creative madness, seem to have made it their mission to bring the best on board in an effort to make luxury synonymous with their brand. Their experimentation may have backfired a bit with last year’s Surrealist theme but they brought it right back on track this year, with an exceptionally creative ‘chocolate party’.

Now in its third party this year, the brand managed to strike a great balance between music and fashion with Meesha Shafi as their muse. She represents someone who owns her own modern and edgy sense of style and simultaneously has a powerhouse of a rustic voice reminiscent of old-style singers.  She performed a groovy rendition of Nina Simone’s ‘Feeling Good’, while dressed in an outfit by The House of Kamiar Rokni. And what an outfit that was! Lit with LED lights while she sang, it reminded us a bit of Claire Danes’ 2016 Met Gala look but was nevertheless one of the high points of the night. Picking someone like Shafi, who makes few public appearances (therefore, any one presence would garner media attention) and also has such a strong hold on fashion and music was a wise move by the brand.

Next up, the designers for the fashion sequences were also chosen well – Munib Nawaz, Elan and Hussain Rehar. It seemed as if the criticism from last year and the year before was duly noted before the capsule collections were designed. Previously the designers ended up becoming too literal with their chosen colour palettes and used only shades of brown which isn’t the most flattering colour for clothing.

This year the designers played on their signatures – Elan stuck to their forte with classy ball gowns, Hussain Rehar experimented with very out-there, disruptive silhouettes and Munib Nawaz showcased menswear in a chocolate-y palette. Both outfits by The House of Kamiar Rokni were strong with powerful shoulders and silhouettes on the muse of the night. The NPro team also rose to the occasion quite well creating glitter cat eyes in gold and embellished gold braids as well as Shafi’s beauty look. Ali Xeeshan joined hands with The Chocolate Genius, Paul Joachim who’d been flown in for the event and created a chocolate dress. Yep, that’s right. There were also sculptures of eagles and crowns scattered around the venue. Kamiar Rokni and Rehan Bashir directed the fashion show and Mekaal Hasan was the sound producer. Each person was able to play on their strengths and therefore, managed to put together a great show.

Why we think the clothes shown work is because a fashion presentation like Magnum is meant to showcase unabashed creativity. It is fashion like this that exists outside of the pace and pressure of the commercial sales cycle that excites. It is like the genesis of fashion before it became muddied by a spin-cycle of trends. No one comes to an event like this to pick clothes for the upcoming festive season (although we did see some stylists trying to figure out whether any of the dresses would work for the red carpet). The fact of the matter is that these clothes are meant to create drama and nothing more. They are not meant to have a market beyond the ramp and may just end up at at the designers’ showroom but at least the designer is pushed to work out of his/her comfort zone.

The night also married technology and fashion with Shafi’s LED dress and a digital immersion room which made for a fun little activity upon entrance. 30 second recordings were made and sent out to those who participated in the fun activity. The Chocolate Affair had a good attendance with stars like Ali Zafar, Shaan Shahid and musicians Jimmy Khan, Ali Hamza, Ali Sethi who came out along with the fashion frat. What’s more is that the night came to a timely end without any frightful delays. Magnum’s annual party may now raise the bar for other events and we honestly wish other brands would follow suit. With this successful event behind them, the brand gained massively from the mileage fashion and music provides. It probably further cemented the brand’s aspirational image but we now hope to hear of their philanthropic efforts.

It was all sugar and spice