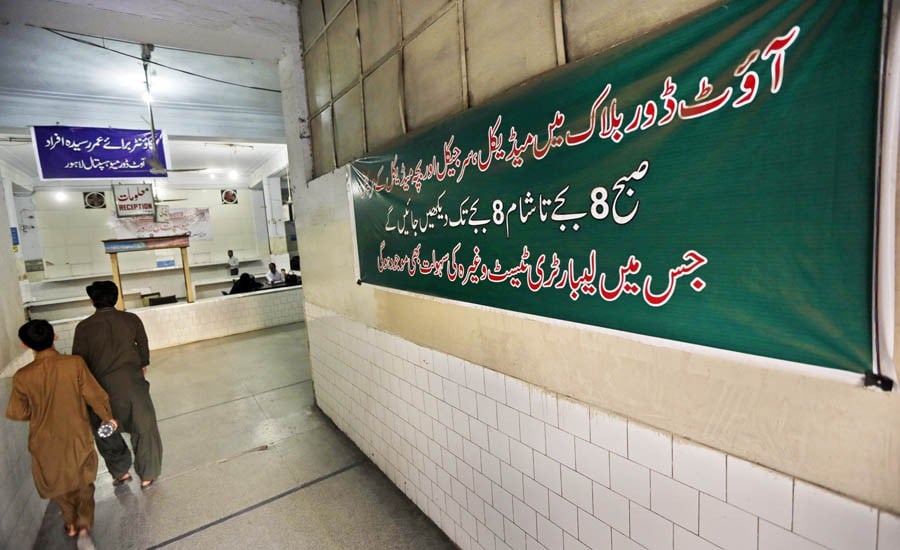 There are several factors that may be contributing to the low turnout of patients during the 2nd shift of OPD -- chiefly, the unavailability of medical specialists, lack of test facilities, ultrasound, X-ray, CT Scan, etc.

The patients are already calling it a ‘partial’ service and a waste of time and resources. M. Akram, a middle-aged man who had just visited the OPD at Mayo, said the "doctor just prescribed me a few medicines and asked [me] to come back in the morning for a few tests and further examination.

"Is this some kind of a joke? he asked, obviously enraged.

Akram also said that he saw no ENT, orthopedic, and neurosurgeon at the second shift of OPD.

TNS learnt that Mayo Hospital boasts more than 20 outdoor patient departments, but the evening shift has only opened the medical department; there is a medical officer (MO) and a paediatrician to be found here. Besides, no X-ray, ultrasound, or lab tests are conducted during the evening shift hours. Those who need to get the tests are asked to come back in the morning.

Most doctors prefer private clinics in the evenings. The Punjab Health Department spokesman termed it "the right of every doctor but they should be doing it after they are done with their hospital duty. It is a fallacy to undermine the importance of consultancy at evening OPDs."

Khalid Asad, a patient, sitting on a bench outside the doctor’s room in Mayo said he had visited the hospital thrice in a week but his treatment wasn’t started.

"When I came here on the first day, I didn’t find a doctor," he revealed. "The clerk told me he could not issue me a slip because the doctor hadn’t come and so I should go to the Emergency."

Another patient who didn’t want to be named, said that he "was looking for an ENT specialist, but I was told that the specialist does not visit the OPD in the evening shift. This is highly objectionable."

A doctor at Mayo Hospital said that he did "not think [that the] evening OPDs was a good idea unless you are offered all the facilities provided to the patients in the morning shift."

Commonly, the doctors that are attached with professors practice privately or they want to specialise or study further instead of doing the second-shift OPD; hence, you find that most doctors in the evening OPDs are either MOs or on ad hoc.

A clerk said that "60 to 70 patients visit the evening OPD, which is far less compared to the turnout in the morning shift."

He revealed that the hospital had started a surgery department in the evening too but it had been closed because of little attendance.

Dr Nadeem, AMS, Nawaz Sharif Teaching Hospital, Yakki Gate, asserted that the evening OPD [in the hospital] is quite a success. "More than 300 patients visit us daily. We have paediatrics, medicince, and gynae OPDs in the evening shift. Besides, ultrasound, X-ray, and other medical tests are also conducted during the evening hours."

When asked why there were only two consultants in the evening shift, the AMS said, "The hospital faces shortage of doctors. Many seats for senior consultants are vacant. Those appointed on ad hoc basis don’t stay long. Whenever they have a good offer, they leave the hospital. Shortage of consultants is the main reason for not opening all OPDs in the evening shift but it does not mean the patients go home without medical checkup. Our available MOs deal with them, and tell them where they should go. If they need immediate treatment, they are referred to the Emergency, otherwise they are asked to come to the morning shift."

According to Ikhlaq Ali Khan, Punjab Health Department spokesman, the evening shift OPD is not successful because the patients are not used to it, and the government does not want to waste more money in a project which is not popular with the public. In the evenings, the people prefer to go to the emergency.

He said, "The OPDs in the evening was started especially for daily wagers, and for those who could not come to the hospitals in the morning shifts due to their job nature."

To a question about nonavailability of doctors and medical test facilities in the evening hours which was keeping the people away, the spokesman said that full-fledged OPDs could not be available for a handful of patients. "With time, as more and more people start showing up, we shall go on adding facilities."

About the incentives to the doctors who are tasked for evening OPD, the spokesman said, "The turnout of patients in the evenings is very low, and in the presence of emergency service at all government city hospitals, I think there is no need to give special incentives to such doctors. They do their duty as per the instruction of the administration."

Most doctors prefer private clinics in the evenings. The Punjab Health Department spokesman termed it "the right of every doctor but they should be doing it after they are done with their hospital duty. It is a fallacy to undermine the importance of consultancy at evening OPDs."