At home with solitude

It was the creation of a sinister world that fascinated and engaged Tassaduq Suhail till the end. Not many artists could dare to create, let alone exhibit, what he painted 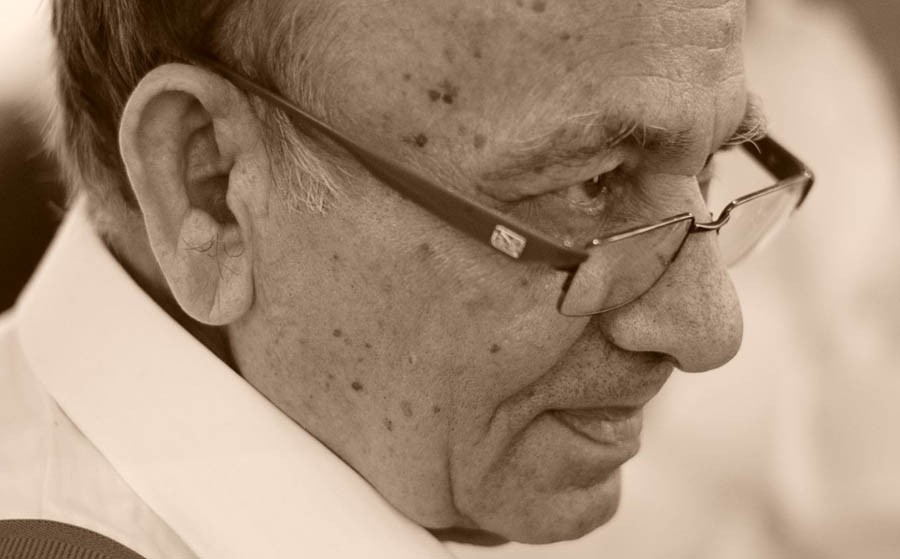 Around two weeks ago, I heard that Tassaduq Suhail was hospitalised in Karachi. The news evokes mixed or contradictory feelings in me. Knowing his age and state of health, the art critic in me started taking mental notes, forging phrases for the coming obituary. The humane part of me hoped he would survive this time too, like on a few occasions before. I spent these two weeks between despair and desire, till the news came on October 2, that the veteran painter was no more.

One is not sure about his last moments; was he abandoned or looked after by his admirers? They say humans come alone in this world and that’s how they leave. This is partly true, but the process of birth requires many others to be around, including the mother of course. And even in death, in most instances, one is accompanied by people who are there to perform the final rites. While alive, one is always split between being alone and in crowd. You could be solitary with your companions, and enjoy the company of your loved ones in your thoughts.

This was the case with our dear-departed Tassaduq Suhail. A self-taught artist, who spent most of his life in the UK painting tirelessly, despite the fact that he had to earn his bread doing other jobs. Bread? The term is being used just for the sake of convenience. Having known Suhail, one dare not refer to something as banal and boring as bread. Everyone close to him knew about his other ‘favourites’ that satiated and stimulated him during his long life --- Tassaduq Suhail died at age 87.

What many would tend to lock in their closets, for fear of society, Tassaduq Suhail would never mind disclosing. He shared his personal demons and delights, both in his conversations and on his canvas.

It would, in fact, be misleading to assume that only one chosen item nourished him. It was life itself that encouraged him to share his ideas, emotions and experiences with others. Like many other artists of his generation, Suhail was not solely a visual artist; he was deeply immersed in literature and wrote and published a collection of Urdu short stories. In the preface, he states that he went to London in 1961 for writing stories from a different point of view/reference. In his own stories, he states, only a few names and places are fictional, the rest is factual. Most of these pieces are about a young man’s amorous sojourns in the West and the opposite character happens to be a white female.

Writing the flap of the book, fiction writer Firdous Haider provides the background for the author switching mediums to painting -- "solely for the love of a girl". We are not sure whether it was an observation or assumption, although it does fit the character of a person who sought love and bestowed it in its multiple variations.

I first met Tassaduq Suhail in the 1990s with his friends from the world of literature during his solo exhibition in Lahore. All the works bore the hallmark of his distinct individuality. After the show, Suhail reminisced about his past, his years in London and his views on art and life. Today when I recall his tone, I realise that the honesty and ease with which he told his life story was all too evident in how he constructed the narratives in his paintings.

His art was a reflection of a unique personality. Not many artists could dare to create, let alone exhibit, what he painted. Lascivious maidens in their natural state leered by pious figures, humans interacting with animals in various forms, all amid settings that appear real and lasting (since these reside in our imagination).

By and large, it was the creation of a sinister world that fascinated and engaged Tassaduq Suhail till the end.

This delight in sin, senses and sensuousness sustained Suhail. Beyond his personal taste and indulgence, his scheme of working and style of living posed a challenge to the established norms of society. It must not have been easy to lead a life in which the distinction between personal and public perishes, and everyone is aware of your shameless unconscious (is there any other kind of unconscious?). Tassaduq Suhail was manufactured for being Tassaduq Suhail. Or maybe it was the root of his first name (sadaq in Arabic), truth, that compelled him to speak the truth through his pictures.

Picasso said "art is a lie that makes us realise truth". A majority of our artists have translated this dictum -- in hiding their real personalities for the sake of status in society. Only a few have the guts to express what they feel, without censoring their emotions and imagery. The last one in this league was Ahmed Zoay. For them, what is the point of existing if not conveying one’s inner self, and what is the reason for living if not loving? For both, a person needs courage and clarity.

Even in my brief and formal encounters, I spotted an extraordinary presence -- in every sense of the word. I saw him last after his solo exhibition at Full Circle Gallery in Karachi. This was a time when he was not maintaining good health; yet he came down the narrow stairs to greet me at the entrance of his studio flat. He was a kind-hearted person who would never let you worry about his frail health or old age, because soon he would start talking about young women. A friend and gallery owner in Karachi informed me that Suhail sahib told her about his three expenses -- imported booze, female ‘models’ and a recently invented medicine for men.

What many would tend to lock in their safety closets, for fear of family and friends, Tassaduq Suhail would never mind disclosing. He shared his personal demons and delights, both in his conversations and on his canvas. Like a psychologist, he knew that every human would identify with that layer of psyche which is raw, terrific, pure and exciting. You could use all these words to describe his art. Instead of being predictable, it unfolded the maker’s soul which was always searching for new meanings, visions and relations. In an interview for the book, 50 Years of Visual Arts in Pakistan, he explained his approach: "… I think 24 hours, I day dream".

It is unsurprising that Tassaduq Suhail was an ideal artist -- someone who only made friends and no enemies. All his life, he was surrounded by friends and people who loved him in different capacities. He was one of those fortunate artists (Zahoor ul Akhlaq immediately comes to mind) who received unsurmountable warmth and admiration.

Suhail named his collection of short stories, Tanhai ka Safer (Journey of Loneliness). Knowing him, one is sure he wasn’t lonely in his last days nor he would be in the journey he is undertaking now. I know who he would prefer to be with -- even in heaven -- and don’t need to provide the details. Let Tassaduq Suhail sail through comfortably in the best of company for his final voyage, while he is on way to rest in the pleasure of peace -- his art. He told me once, "Anything I like in a painting takes me away to a new story, to a faraway land". Now he has taken his stories to a faraway land!

At home with solitude