Give way to life 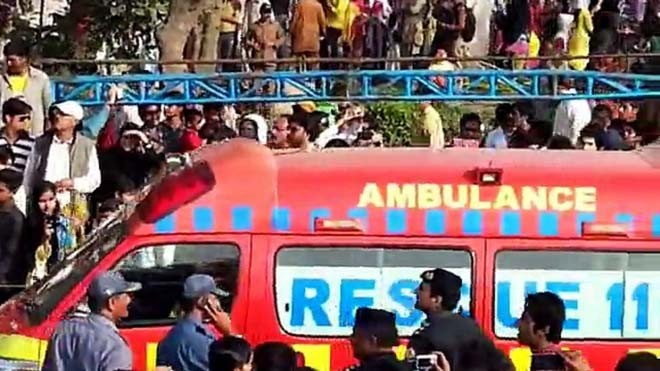 The ever increasing traffic in cities has created a great problem that not only wastes time of people stuck on roads but also causes anxiety and irritation. The routine traffic blockades are a constant hurdle in the way of ambulances to reach hospitals or to patients. This life-threatening issue of our daily life needs to be addressed.

To get out of this mess, the International Committee of the Red Crescent Pakistan, Traffic Police Punjab, 1122 Rescue and officials of Al-Hamra Art Centre sat together on August 23 at Al-Hamra office to initiate a public awareness campaign on giving way to ambulance with the title, ‘Give Way to Life’.

The purpose of the campaign is to create awareness among the general public on giving way to ambulances carrying patients. The campaign will commence from October 1 and continue till December 31.

It is shameful that we are living in a society where we need to launch a public awareness campaign to convince people to give way to ambulances in emergency. We all know that giving way to ambulances in traffic is a crucial responsibility as every minute and second is important.

The roads in cities and rural areas have not been originally constructed with proper planning to give way to ambulances. Hence, the campaign should target the central and provincial governments to plan in such a way that ambulances don’t stuck in traffic.

Above all, the law-enforcing agencies indirectly and the provincial governments are directly responsible for the traffic mess when roads are blocked for VIP movements -- no matter if ambulances are also stopped till the VIP movement is cleared.

Similarly, political processions, meetings and dharnas also create hindrance in the movement of ambulances. It is very shocking that three major hospitals in Lahore, including Services Hospital, Ittefaq Hospital, and General Hospital have not been given a pathway from the other side of road for an ambulance to enter these hospitals and they have to take a long U-turn, wasting precious time in traffic jam.

The existing agencies mandated to maintain law and order and traffic in the city, including Punjab Traffic Police, Punjab Highway Patrol, Mohafiz, Dolphin, Punjab Elite Force, Punjab River Police etc, can also help address this emergency matter, in addition to their primary duties. Unfortunately, these forces are not properly trained and used for protecting and guiding ambulances to its destination smoothly.

Further, creating hindrance in the way of ambulance has not been declared a crime and punishable misconduct like violating traffic signals.

It is proposed that an inclusive Website for traffic control and FM channels to guide traffic in trouble can contribute a lot to check this problem. Further, the cities where Metro Bus service is operational, their roadways be allowed for ambulances to reach hospitals and clinics.

Give way to life