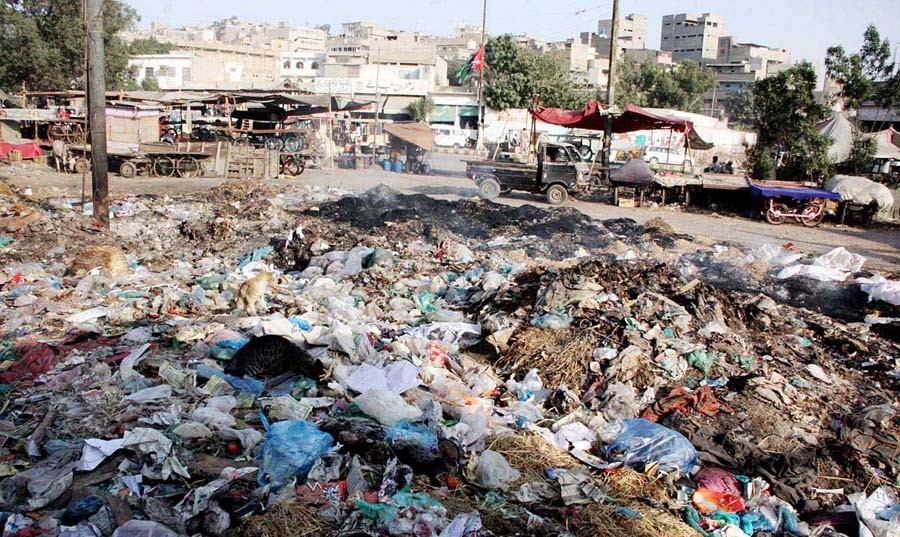 As the Sindh government and Karachi’s local government have locked horns over power and funds for removal of garbage, situation of cleanliness in the metropolis is turning worsen with addition of 6,000 tonnes of solid waste every day in the existing backlog of 1.1 million tonnes.

Out of 12,000 tonnes solid waste, 9,000 tonnes are produced in jurisdiction of six district governments while 3,000 tonnes garbage is produced in limits of 19 civic agencies including six cantonment boards.

Almost all parts of the city are experiencing scruffy situation. Garbage, in most parts of the city especially Orangi Town, Liaquatabad Town, Malir, Lyari and Korangi, remained unattended. The piles of garbage engulfed city’s parks, playgrounds and open spaces leaving city of lights in disrepair.

The Sindh government has hired a Chinese firm, Wuzung, to clean District East and District South from garbage at start of the ongoing year, but there is no improvement in garbage collection in the two districts. The situation aggravated when Sindh Solid Waste Management Board (SSWMB) established collection units in residential areas.

Calculating the cost of garbage collection by the Chinese firm, Dr Sanjnani said the firm is collecting one tonne solid waste against US23 dollars which is 50 per cent of the cost which the Punjab government is paying to a private firm for collection of solid waste.

"Karachi is a garbage city," Farooq remarked. "Presently, 6,000 tonnes of garbage out of 12,000 tonnes is collected and deposited to landfill sites every day, but 6,000 tonnes is adding everyday in the existing 1.1 million tonnes backlog," Farooq added.

"During the tenure of Mustafa Kamal as Mayor Karachi, the budget of KMC was Rs50 billion, but now KMC’s annual budget is Rs25 billion," Farooq observed, adding, "The Sindh government should provide funds to KMC for removal of garbage."

Casting doubts over the performance of the PPP-led government in Sindh, a two-judge bench of Supreme Court constituted a judicial commission on December 27, 2016 to probe allegations of poor state of drinking water and deteriorating sanitation conditions in Sindh, especially Karachi. Keeping findings of the judicial commission in view, the apex court in its interim order, on March 24, 2017, observed that SSWMB should be dissolved for failing to perform and the duty of garbage collection should be handed over to local governments.

Dr AD Sanjnani clarified that it was observation, but not judgement of the apex court, adding SSWMB still exists and as per its law, the board is working for removal of solid waste from Karachi.

The ruling Pakistan People’s Party (PPP) in the Sindh Assembly and ruling Muttahida Qaumi Movement-Pakistan (MQM-P) in the City Council have not done anything till date to remedy the agony of Karachiites except on paper, where it is shown to be active.

Talking to TNS, Mayor Karachi, Waseem Akhtar, said the PPP is holding all departments responsible for garbage collection. "Keeping this situation in view, I knocked at the doors of Bahria Town, and Malik Riaz has assured that it will provide machinery and manpower to KMC to remove solid waste in backlog and collect garbage from streets on regular basis," he said. "In the first phase of this project, solid waste from District Central would be removed, and later, the project would be extended to others districts," he maintained.

MQM-Pakistan Central Coordination Committee member, Ameen-ul Haque, told TNS the PPP-led Sindh government has punished residents of the city for casting vote in favour of MQM in the 2013 general elections. Haque accused the PPP for clipping the powers of local government and depriving elected representatives of funds to carry out cleanliness drive in their respective constituencies.

"If a manhole in any part of Karachi starts overflowing, the affected public would not go to its elected councillor, chairman or mayor to fix the problem, but they would have to contact the Sindh government as the provincial government is holding SSWMB and Karachi Water and Sewerage Board (KWSB)," he said.

Talking to TNS, Pak Sarzameen Party (PSP) Chairman Mustafa Kamal said that the Sindh government and local governments are doing massive corruption in the name of garbage collection. "If Mayor Karachi cannot solve issues of public then he should resign," Kamal said, adding "Mayor Karachi has enough resources and funds to collect garbage from the city."

"If the KMC employees are drawing salaries, collecting money on account of fuel and maintenance of vehicles, then why KMC has failed to make city of lights a tidy metropolis," Kamal questioned.