An eye for talent 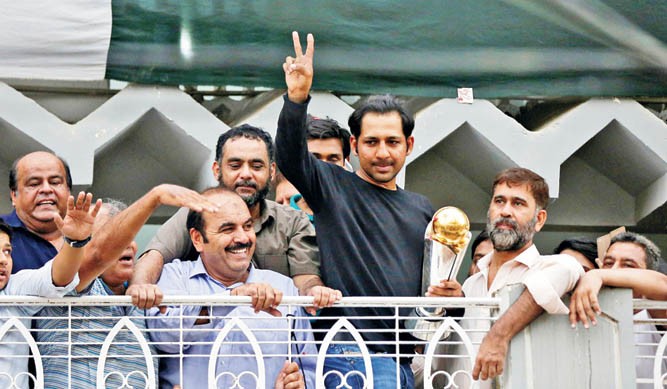 "I will first thank Allah for helping us win Champions Trophy title. And I am also very thankful to Azam bhai (Azam Khan). He has always been very helpful," Sarfraz Ahmed, captain Pakistan cricket team, said during a ceremony held after the title-winning triumph in the ICC Champions Trophy in England this summer.

Azam Khan received much recognition after he was made manager of Pakistan Super League (PSL) team Quetta Gladiators. But the praise he received from Sarfraz was not because they are associated with Gladiators as captain and manager. The two have been associated for a long time. It began when Pakistan Cricket Club, where Azam Khan was secretary, picked the player.

"Sarfraz would throw his cricket kit over the wall so that his father couldn’t see him wearing it when he would go out of his home. He would wear them later at the ground," Azam told ‘The News on Sunday’.

Sarfraz’s late father discouraged him initially from playing cricket and wanted him to concentrate on studies. Sarfraz says he would do anything to show his father his exploits in cricket. "He would be really proud of me if he were alive," Sarfraz says.

Azam told a more captivating although not that glorious story. "Bowling all-rounder Anwar Ali once came into the nets where our team was practising. He bowled there and I realised the boy had talent.

Anwar Ali played a key-role in Pakistan’s Under-19 World Cup final triumph against India back in 2006 by picking five wickets. The team was captained by Sarfraz Ahmed. Pakistan CC’s Ramiz Raja Jr., who went on

to play for Pakistan and Ali Asad, were also a part of that squad. Asad played for Pakistan A a few years ago and is playing for NBP nowadays.

Pakistan’s middle-order batsman Asad Shafiq, who is currently playing against Sri Lanka in the UAE at the moment, also regularly visits Azam and considers him as his mentor.

I tried to convince his father Raees Khan and he eventually let his son play. He would now be proud of him," Azam said.

Azam said Nadeem Omar, the owner of Quetta Gladiators, and president of Pakistan CC and Omar Associates Grade-II team, always supported him in his endeavours. "There’s always an opportunity cost to do something and the players coming from modest background accrue higher cost of playing cricket. Nadeem always supported me and some players were also financially supported. If I have served the game then it was Nadeem Bhai who stood behind me," Azam said.

Quetta Gladiators, the least expensive team in PSL, made it to the final on both occasions in 2016 and 2017 under the captaincy of Sarfraz.

Pakistan CC has been the most successful club in Karachi, having won NBP-KCCA Inter-Club Cricket Tournament on all occasions. The tournament has been discontinued for three years.

"Most of our players were busy in bigger events. Some were in the national camp. The main players were not in the side when the final of Zone VI was played. Alamgir Gymkhana won the title as a result and we are happy with that," he said.

Azam said that in Zone VI, the younger lot plays for Metropolitan Cricket Club. The players are then picked for Alamgir Gymkhana and then they graduate to Pakistan CC. Having done a great job finding young talent, Azam is certainly one of the unsung heroes of Pakistan cricket.

An eye for talent